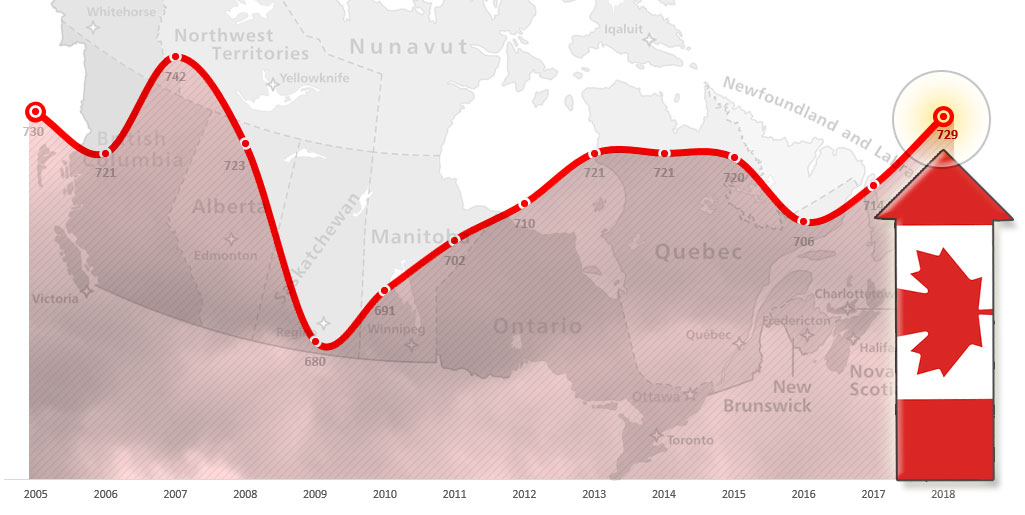 It’s that time of year again, when countries release their updated climate pollution inventories. This is when aspirational climate promises get measured against real-world pollution levels.

And for Canada, the latest results are terrible. The new data show that in 2018, our annual emissions rose yet again. This time, by a depressingly large 15 million tonnes of CO2 (MtCO2). As my chart below shows, we are now emitting 729 MtCO2 per year — our highest level in more than a decade. 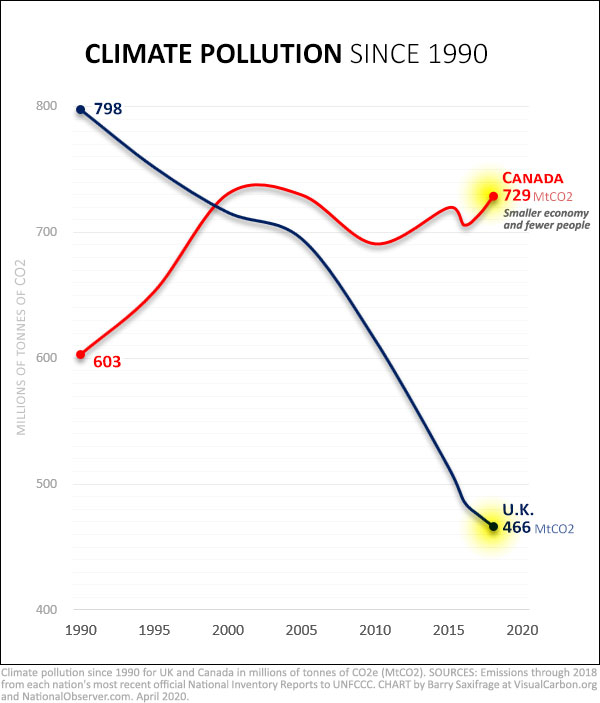 Worse still, we’ve now erased all the progress we’ve made toward our international climate targets. We are now emitting the same amount of climate pollution as we did back in our 2005 baseline year. Thirteen years — zero progress toward our targets.

We don’t have to keep failing. Climate failure is a choice. We could choose climate success instead. For example, one thing we could quickly do is adopt the climate tool kit used successfully by our Commonwealth peer, the United Kingdom.

The U.K. emissions are shown as the blue line on the chart. The U.K. has a much larger population and much larger economy than we do. (In fact, both are nearly double our size.) So, it’s not surprising that back in 1990, they also emitted far more climate pollution than we did. Now, as the chart makes clear, they emit far, far less than we do.

While we’ve been busy increasing emissions by 125 MtCO2 per year, the U.K. has been cutting theirs by 330 MtCO2. The resulting climate-action gap between our two major economies is rapidly approaching half a billion tonnes per year.

Canadian and U.K. governments have both been making high-profile international climate commitments for decades. My next chart lets you see how each nation is living up to their promises.

The blue bull’s-eyes show major U.K. targets. For example, under the global Copenhagen Accord, they promised to cut their emissions to 20 per cent below their 1990 level by 2020. As you can see, they’ve already cut twice as much.

Canada’s targets are shown by the red bull’s-eyes. Our Copenhagen Accord target is 17 per cent below our 2005 level. That works out to just above our 1990 level. Despite setting a much higher target, we’ve never come anywhere close to meeting it. Instead, we’ve increased our annual emissions by 50 MtCO2 since we made our Copenhagen promise a decade ago.

So, what is the U.K. doing differently that we could adopt?

More than a decade ago, the U.K. passed a broad climate policy tool kit called the Climate Change Act 2008, also known as the “Carbon Budget” law. Here are four key things it does that Canada’s climate policy still does not.

“What are we waiting for? How much deeper into the gathering climate storm are we going to keep flying blind and dangerously off course?”

Key 1: It requires a plan

To start with, the law legally requires the U.K. government to create plans to meet all its climate targets. Hey, making a plan to reach your goal seems like an obvious thing to do, right?

But, while Canadian politicians regularly self-proclaim themselves to be climate leaders, the reality is that in 30 years of setting climate targets, Ottawa has never yet produced a plan to meet any of them.

The table on the right shows nine climate targets promised by Canadian governments. The Mulroney government set the first two back in 1988 and 1990. 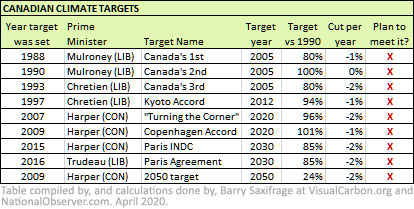 Nine climate targets. Thirty years. Zero plans produced to meet any of them.

For example, it’s now been four years since Ottawa pledged Canada’s 2030 Paris Agreement target. And, as we will see in more detail below, the government’s own projections show that all their current and proposed policies won’t get us anywhere close to the target.

Adopting the U.K. Carbon Budget tool kit would be a gigantic climate leap forward in Canada just from the requirement that Ottawa must produce a plan to meet its targets.

A second critical benefit of the U.K. Carbon Budget law is that it requires government to act “at least 12 years in advance to allow policy-makers, businesses and individuals enough time to prepare.”

Canadians would hugely benefit from having the luxury of such long lead times. As it is, we only have 10 years remaining to our 2030 climate target, and the neither the public nor the private sectors know what will be required of them. What we do know is that we have a still growing pile of emissions to cut, a rapidly deteriorating climate system increasing the urgency and a rapidly shrinking timeline in which to cut our pollution down to safe and sustainable levels.

To remove politics from the process as much as possible, the U.K. tool kit includes an independent Committee of Climate Change (CCC). As their website explains, “the CCC was set up to ensure emissions targets are set based on expert independent assessment of the evidence and to monitor the U.K.’s progress toward meeting the targets.” The committee does the heavy lifting and then brings proposals for carbon budgets and the policies that could be used to meet them to the government to vote on. Then, the CCC makes sure the government of the day follows through.

Removing climate policy from political whiplash would make it far easier for Canadian individuals and businesses to plan ahead efficiently. It would help eliminate the chaotic policy reversals that come with each change in government. For example, as prime minister, Stephen Harper was famously opposed to carbon pricing: “Anybody who tells you that a carbon tax is an environmental policy is trying to pull the wool over your eyes.” A few years later, the new Trudeau government switched Ottawa’s focus to put carbon pricing at the centre of Canada’s climate policies. The Conservative opposition threatens to eliminate the policy when they get back in power.

Key 4: Carbon budgets that cover all emissions in all years

At the heart of the U.K. Climate Change Act tool kit is the concept of “carbon budgets.” The law requires the U.K. to set legally binding five-year carbon budgets. These must include all emissions in every year. These budgets are a critical tool to keep the country on track.

You can see the U.K.’s quarter-century of already-legislated carbon budgets as blue boxes on my chart below. And you can also see how their past emissions follow them down. Notice also that they already have policies in place that meet the next 10 years of carbon budgets.

Now, take a look at where Canada is headed under our current policies. That’s the dotted red line I’ve added to the chart. Our current policies won’t get us anywhere close to our 2020 or 2030 climate commitments.

And Canada’s promised suite of additional “proposed” policies won’t either. See that red dot in 2030 labelled “with proposed policies?” That’s Ottawa’s own projection released just a few months ago in their Fourth Biennial Report to the United Nations. Not. Even. Close.

And that dot generously assumes that all the “proposed” policies actually get enacted — and on time. In Canada, that certainly isn’t a given, considering past political promises made and unmet:

If Ottawa adopted the U.K. Carbon Budget tool kit, then Canadians would know there really is a plan. We would get to see it. We would know far in advance what the policies will be and what our roles will be. We’d have carbon budgets for guardrails to keep us on a steady track. And we’d have independent experts doing the heavy lifting to remove much of the destructive political whiplash and antagonism we experience now.

What are we waiting for? How much deeper into the gathering climate storm are we going to keep flying blind and dangerously off course?

Comparing entire countries can sometimes seem abstract. So, I’ll wrap up with a chart comparing climate pollution per person. 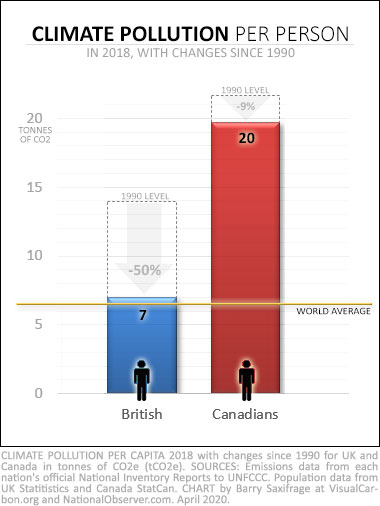 It shows that the Brits have cut their emissions per capita in half since 1990. They’ve dropped from 14 tonnes (tCO2) per person down to seven. That’s getting close to the world average.

Canadians, in contrast, have cut little from our direct emissions in the past three decades. Since 1990, our pollution per capita has gone from 22 tCO2 to 20 tCO2. At this rate, it will take us centuries just to get to where the British are now. We currently pollute triple the global average. And despite being one of the world’s “Dirty Dozen” climate polluters, both in total emissions and per capita, we haven’t taken responsibility for our excesses by meeting our climate commitments — or even by creating a plan that meets them.

Instead, our emissions are still heading in the wrong direction.