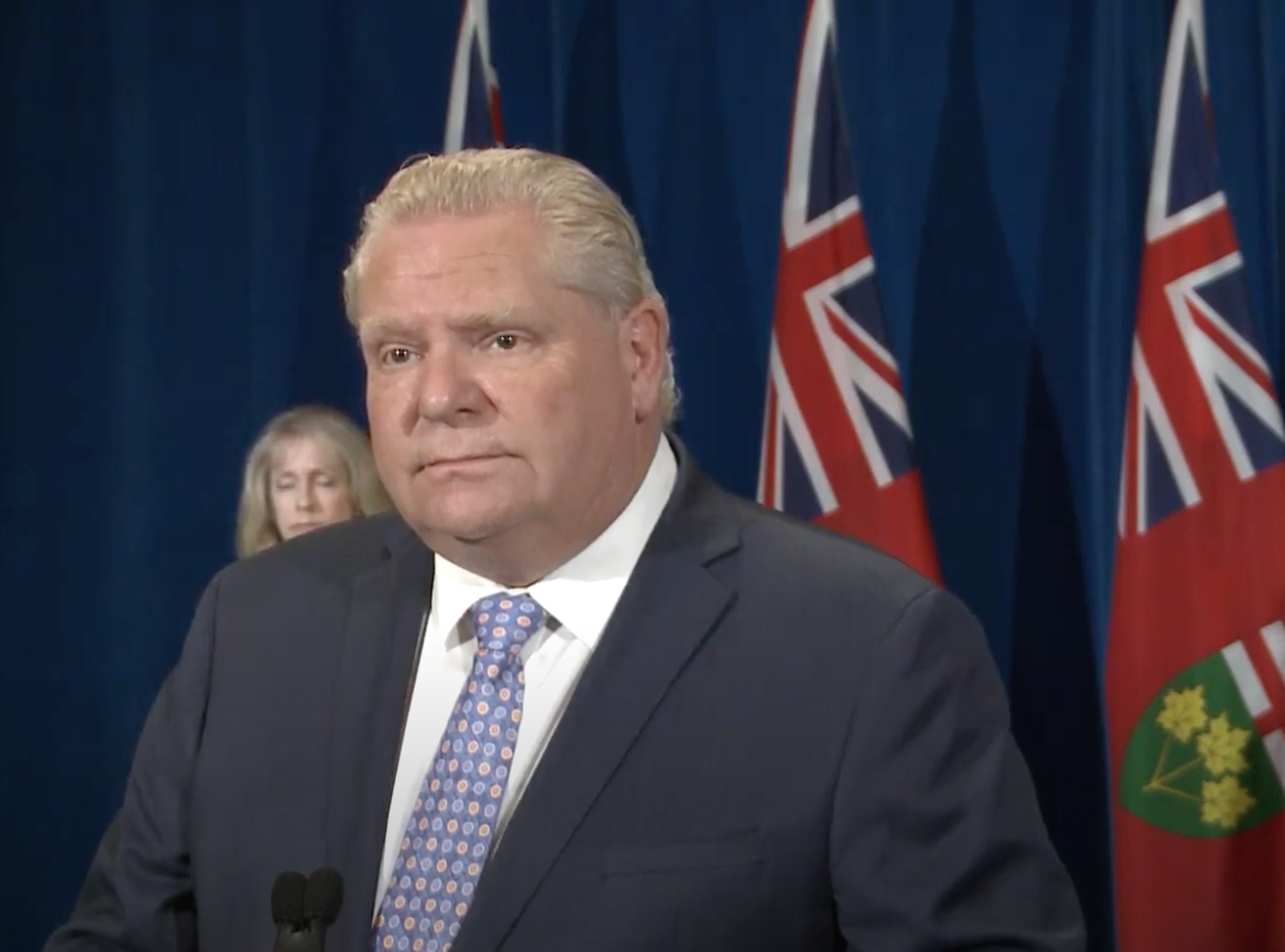 Ontario Premier Doug Ford, with Long-Term Care Minister Merrilee Fullerton on his left, said unionized long-term care inspectors had been doing their job over the phone instead of in-person. Photo from Premier of Ontario on YouTube

Ford said the inspectors refused to enter long-term care homes that were stricken with COVID-19, instead examining facilities over the phone. The Ontario Public Service Employees Union (OPSEU), which represents the inspectors, swiftly fired back that the premier was misinformed.

“I’ve been taking bullets for the union every day up here,” Ford said at his daily COVID-19 briefing. “They were doing telephone calls for inspections. The truth of the matter is, they were refusing to go into these homes.”

The union’s president, Smokey Thomas, told National Observer the premier had been “given wrong information.”

And in a statement later Thursday afternoon, Thomas said bureaucrats — not the union — had told inspectors not to enter the infected homes. Not a single inspector refused to work, and 60 of 164 inspectors volunteered to go into hard-hit facilities, Thomas added.

Without providing names, Thomas accused “ministerial managers” in the health and long-term care ministries of “purposefully misleading the premier to cover up their own incompetence.” He also said the union wanted to ensure workers had adequate personal protective equipment (PPE) before they went in.

“We were concerned that inspectors could have potentially, and unknowingly, spread COVID from home to home,” the statement said.

“Imagine for a second the terrible tragedy that could have happened had the inspectors gone into the homes without proper safeguards, especially given what we now know about asymptomatic and pre-symptomatic transmission. The death toll could have been even worse than it already is.

“The premier says he is tired of taking bullets for the union, but in this case, our prudence helped him dodge one.”

In response, Ford doubled down on his statements. “The premier’s comments stand,” said a spokesperson for his office, Ivana Yelich, in an email.

Ontario’s long-term care homes have been ravaged by COVID-19. The virus disproportionately kills elderly patients and those with pre-existing conditions, a vulnerability that was worsened in the homes by long-standing problems with underfunding and low staffing levels.

After Ontario Premier Doug Ford accused inspectors of doing their job by phone instead of in-person, the Ontario Public Service Employees Union fired back, saying Ford was misinformed. #onpoli

On April 22, Ford called for military assistance in five of the province’s hardest-hit homes, and troops were deployed in early May. Earlier this week, a Canadian Armed Forces report revealed disturbing conditions inside the facilities, alleging abuse, neglect, insect infestations, a lack of proper infection control and one choking incident that may have led to a patient’s death. The province announced it would take over four of the five homes mentioned in the report Wednesday, plus a fifth home that wasn’t included.

It wasn’t immediately clear when inspectors may have allegedly stopped entering the homes, which facilities may have gone without in-person inspections and how long that went on. Ford said Thursday that inspectors are now back in the homes, and credited Thomas for making that happen.

Ford also incorrectly accused the media of knowing about the problem, but not reporting it. In fact, CBC News first reported on May 7 that inspections were taking place over the phone inside one Toronto long-term care facility. Thursday was the first time Ford, who has given daily pandemic press conferences since March, discussed the issue publicly.

Earlier Thursday, the premier’s office released an April 22 letter from Thomas to Ford and Long-Term Care Minister Merrilee Fullerton. In it, Thomas asks Ford and Fullerton not to mandate in-person inspections, and said that the problems in long-term care had already been identified. (Advocates have sounded alarms on the issue for decades, and a public inquiry was held in 2019.)

The letter was written the same day Ford requested military aid. In his statement Thursday, Thomas said Ford and Fullerton did not send him a reply.

“Thanks to the low staffing levels and the inherent risks to multiple parties from such inspections, this plan is not only ill-advised, but not necessary,” Thomas wrote in the letter. “In-person inspections will not provide us with any more information than we already have.”

In the letter, Thomas called for more inspection staff to be hired, and that 164 inspectors were “overworked and frustrated” trying to assess conditions at 626 homes. Although Ford said Thursday that the province offered the inspectors PPE, Thomas said in the letter that the workers are not trained infection control specialists, had no experience using the gear and wouldn’t be able to help the way additional nurses could.

“Senior ministry staff have also stated inspectors need to physically see if residents are being treated properly. We already know they are not,” the letter reads. “Senior bureaucrats know it, too. The homes need more staff and equipment. Risking the health of residents and inspectors has zero value right now.”

In his Thursday statement, Thomas said the union made the same observations as the military.

“The premier has a choice,” the statement said. “If he listens to front-line workers through their union, OPSEU, he can get the truth about what is going on in long-term care and what he needs to do to make things right.”