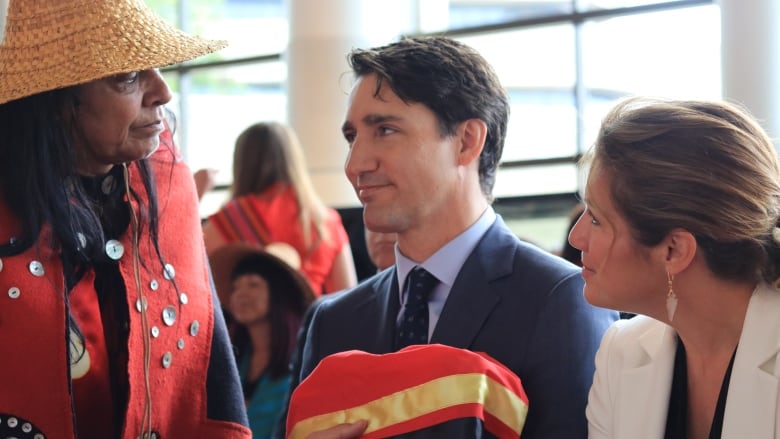 Longtime MMIWG advocate Gladys Radek has a moment with Prime Minister Justin Trudeau moments after he was handed the national inquiry’s final report on June 3, 2019 in Gatineau, Quebec. (Chantelle Bellrichard/CBC)

The federal government is postponing the release of an action plan on missing and murdered Indigenous women and girls that was expected to land next month.

The unveiling of the strategy — which Ottawa is co-developing with provinces, territories, Indigenous leaders, families and women’s groups — was anticipated to coincide with the one-year anniversary of the National Inquiry into Missing and Murdered Indigenous Women and Girls releasing its final report.

Crown-Indigenous Relations Minister Carolyn Bennett told CBC News more work and consultation needs to take place with Indigenous partners before a formal response to the report’s 231 recommendations can be finalized.

Although engagement continues via Zoom meetings and conference calls, Bennett said the COVID-19 pandemic has set back the government’s timeline and she can’t say when a plan will be released.

“As hard as we are all working virtually, I think we will not have a plan in June,” Bennett said.

“We know it’s urgent. We are all impatient. But the kind of engagement that we’ve been able to do, I think, will deliver a quality plan.”

The $92 million federally funded inquiry was tasked with examining the root causes of violence against Indigenous women and girls.

In its final report, released on June 3 of last year, commissioners concluded Indigenous women and girls are the victims of a genocide in Canada.

The Trudeau government has already responded to some of the inquiry’s main findings, such as calls to overhaul the Indigenous child welfare system, and passing legislation to preserve Indigenous languages and eliminate gender discrimination under the Indian Act.

But other key recommendations have not been fulfilled — such as calls to reform the justice system to make it more culturally appropriate, and to transform policing to reduce racism and create national reporting standards.

The inquiry also called for an immediate end to birth alerts  — a system used by child welfare agencies to flag a person’s history, which can lead to a baby being apprehended from its mother in the hospital.

The practice is still being used in Manitoba, despite a promise to end it from the provincial government.

Bennett said the action plan will be frequently updated so governments can continuously measure progress and adapt.

“It’s been clear we need to build this national action plan from the bottom up,” Bennett said. “We will need to be able to be accountable for the results it’s getting.”

During an Assembly of First Nations meeting in Ottawa last December, Bennett said the federal government planned to have an outline and a document on the action plan by the anniversary of the release of the commission’s report.

Former chief commissioner Marion Buller said governments had ample time to get the work done by the promised date.

“Using COVID-19 as an excuse for delaying a national action plan — to me — is really like saying, well, the dog ate my homework,” Buller said.

Former commissioner Qajaq Robinson said she doesn’t understand what the minister means about the need for more talk.

“What I’ve heard during the inquiry and since is that the time for consultation is over,” Robsinon said. “It’s time for action.”

Gladys Radek, a longtime advocate for missing and murdered Indigenous women and girls, has noticed little change, and said an action plan should have been in place months ago.

“I don’t like the fact that we have to wait to get the national action plan,” Radek said.

Radek has pushed for a national inquiry since her 22-year-old niece Tamara Lynn Chipman vanished from the northwest coast of B.C. in 2005.

Lorraine Whitman, president of the Native Women’s Association of Canada (NWAC), said she feels badly for the families of missing and murdered women and girls.

“They did open their hearts to all of Canada and that’s not easy to do, and we as a country need to stand by the families and let them know that we are here for them.”

Whitman said NWAC offered to assist Ottawa with a national action plan, and provided Crown-Indigenous Relations a list of eight steps that can be taken immediately to reduce the loss of life and start the healing process.

Whitman said NWAC has not heard back from the department, but will wait until the anniversary of the final report on June 3 to share its suggestions publicly.

“I’m very distressed and disappointed in the government in holding back and using the COVID-19 as an excuse,” Whitman said. “I know it’s serious as well, but so are the lives of our Indigenous.”

Although Ottawa is facing pressure to unveil a strategy, Chief Connie Big Eagle of Ocean Man First Nation in Saskatchewan said she does not want to see a rushed response.

“I think it’s still too soon,” said Big Eagle, who is in consultation with the federal government as chair of the Assembly of First Nations Women’s Council.

“Minister Bennett and the federal government need to give themselves the time to put out a good quality action plan.”

Big Eagle said the government must address the core issues that lead to violence against women and girls, such as poverty, education gaps, an overrepresentation of Indigenous children in foster care, mental health needs and sexual and physical abuse.

She said she personally knows of three Indigenous women who either have been murdered or have disappeared, including her childhood friend Shirley Lonethunder, who is still missing.

Big Eagle said she wants to see First Nations women and the families who’ve lost loved ones consulted on the action plan before it is unveiled.

“It’s impossible to go to every individual, but there needs to be some sort of conversation or through a representative of each [geographical] area to come and convey the concerns, the ideas of that particular group or region,” Big Eagle said.

“If they allow all parties to participate and they give [the action plan] the time and attention that it needs, something good will come out of it.”

Indigenous women accounted for nearly 37 per cent of female homicide victims in 2018, according to Statistics Canada. The figure marks an 11 per cent increase over 2014.

It is still not known how many Indigenous women and girls have been murdered or have gone missing in Canada.

Some estimates have suggested approximately 4,000 Indigenous women have been killed or have disappeared over the past few decades, but the inquiry said a true number may never be known.

“People can have discussions about it now and people can at least approach the subject,” said North, who is an advocate for missing and murdered Indigenous women and girls.

“This has reached a level of consciousness that people were fighting for the last 20 years, and I would say we are the leaders in the world on this topic.”

For immediate emotional assistance, call 1-844-413-6649. This is a national, toll-free 24/7 crisis call line providing support for anyone who requires emotional assistance related to missing and murdered Indigenous women and girls. You can also access long-term health support services such as mental health counselling and community-based cultural services through Indigenous Services Canada.

Olivia Stefanovich is a senior reporter for CBC’s Parliamentary Bureau based in Ottawa. She previously worked in Toronto, Saskatchewan and northern Ontario. Connect with her on Twitter at @CBCOlivia. Story tips welcome: olivia.stefanovich@cbc.ca.