System has been ‘ignored’ and ‘neglected’ for decades, says province’s minister for long-term care 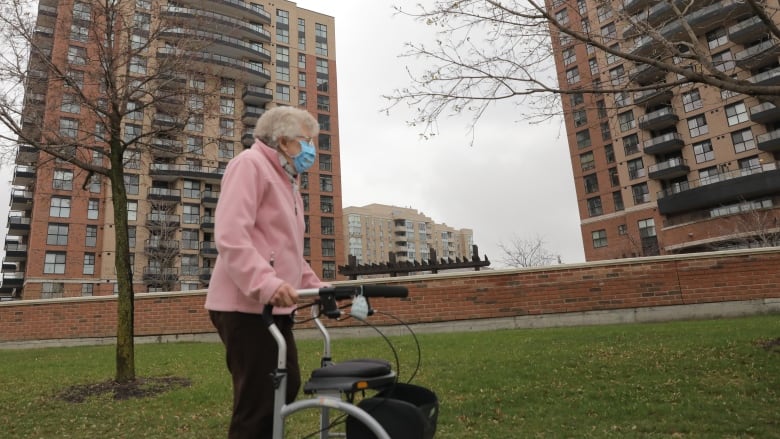 The Canadian Armed Forces on Tuesday released a scathing report about the conditions at five Ontario long-term care homes, but many — including the government itself — say problems have been known for years. (CBC)

Jacqueline Mitchell hasn’t been able to hug her 94-old-mother since March, and now, in the face of a shocking Canadian Armed Forces (CAF) report into the state of five Ontario long-term care homes, she is aghast.

Mitchell’s mother has Alzheimer’s disease, and has been a resident at Etobicoke, Ont.’s Eatonville Care Centre since 2017. That’s one of the homes listed in the report, which details disturbing observations made by military members who were called in to help after some of the province’s long-term care facilities were overrun by COVID-19 outbreaks.

The CAF report outlines instances in which members spotted equipment used on both infected and non-infected patients without being disinfected, as well as rotten food, cockroach infestations and a startling disregard for basic cleanliness.

“It is scandalous. It is shameful. It is shocking,” Mitchell said. “Our senior generation is living in that, and that is a national atrocity.”

There are many signs the provincial government knew, or should have known, what’s happening inside these homes, but it took military intervention to bring the details to light.

Merrilee Fullerton, Ontario Minister of Long-Term Care, says the province is committed to fixing long-term care homes in need of help after a report by the Canadian military on conditions in five facilities. 2:02

For weeks, Ontario Premier Doug Ford has been saying the province’s long-term care system is “broken.” And on Tuesday he said that he saw firsthand the limitations of the system when his brother, former Toronto mayor Rob Ford, was in palliative care before his death in 2016.

That, to Mitchell, signalled an acknowledgement on the premier’s part that something was very wrong with the system.

“That should have alerted him on a personal basis to what was happening in these homes.… He should not be surprised,” she said.

Since the first weeks of the pandemic, Ford has been advocating for the need to put an “iron ring” around Ontario’s long-term care homes, with the province touting measures it has enacted to keep people safe, like limiting visitors and preventing most caregivers from working at multiple homes. The province then asked for the military’s help late last month.

As of Tuesday, the Ministry of Long-Term Care was reporting 1,538 deaths linked to COVID-19, while the Public Health Ontario Daily Epidemiologic Summary listed 4,892 cases among residents.

In a statement issued Tuesday, Opposition NDP Leader Andrea Horwath slammed the government’s response, and called for the resignation of Minister of Long-Term Care Merrillee Fullerton.

“It’s shocking that the Canadian Armed Forces needed to lift the veil when Doug Ford and Merrilee Fullerton ought to have known about these horrific conditions, and did nothing to take the homes over,” Horwath said. “The premier cannot pass the buck, finger-point and express outrage about what his own government is doing on his watch.”

System ‘neglected and ignored’ for decades

Fullerton said it was the novel coronavirus that pushed some of the province’s long-term care homes to the brink.

“This is something that everyone has known about for years. Our population is aging. Long-term care was ignored. Long- term care was neglected,” she said.

“We were shining a light on this. We were looking at fixing a system that had been neglected and ignored for decades — and then COVID … tipped the homes that were having difficulties with staffing already right over the edge.”

WATCH | Marissa Lennox of CARP says the system has long been broken:

CARP Chief Policy Officer, Marissa Lennox, says long-term care is something people don’t want to think about, and that the system has long been broken. 10:08

Ford said Tuesday that it took a constant, watchful eye from the military to truly uncover the scope of the problem.

“Yes, inspections happen and these folks come in there, but it took the military to be there 24/7,” the premier said, adding it’s impossible to know the extent of the problems plaguing the system “until you live, breathe, eat it … until you’re there around the clock, at nighttime and during the day.”

But a recent CBC News investigation found that last year just nine out of 626 homes in Ontario actually received resident quality inspections (RQIs), which are unannounced and more comprehensive than those arising from incident reports.

CBC News reviewed inspection reports from the last five years for all long-term care homes in the province and found that while most received an RQI in 2015, 2016 and 2017, the number dropped to just over half in 2018 and nine last year.

In a news release issued Tuesday, Ontario Nurses’ Association (ONA) president Vicki McKenna said the association has contacted the Ministry of Labour about working conditions in long-term care homes, but the ministry has written few orders and has “rarely been on site to conduct physical inspections.”

“This sector needs immediate attention,” she said. “Government must act now to halt these outbreaks.”

ONA’s statement also notes that a number of long-term care reports have been issued in the last two decades that continue to make the same recommendations to improve the sector: more staffing, more funding, better training and increased resources.

A 2017-2018 public inquiry into the safety and security of residents in long-term care homes found “systemic vulnerabilities” in the system. The Ontario Health Coalition has for years been issuing reports about problems in long-term care, including understaffing and excessive violence.

The Ontario Personal Support Workers Association also said in a statement that these are not new problems.

“We have been working through these difficult conditions for years,” the statement reads. “They have worsened over the last three months.”

Laura Tamblyn Watts, CEO of national seniors’ advocacy organization CanAge, told CBC News in an interview it’s very telling that the state of these long-term care homes could shock even soldiers who go on peacekeeping missions.

“How much more do we need for this government and our provinces and territories to take needed action?” she asked.

Adam Carter, Reporter, is a Newfoundlander who now calls Toronto home. He enjoys a good story and playing loud music. You can follow him on Twitter @AdamCarterCBC or drop him an email at adam.carter@cbc.ca.