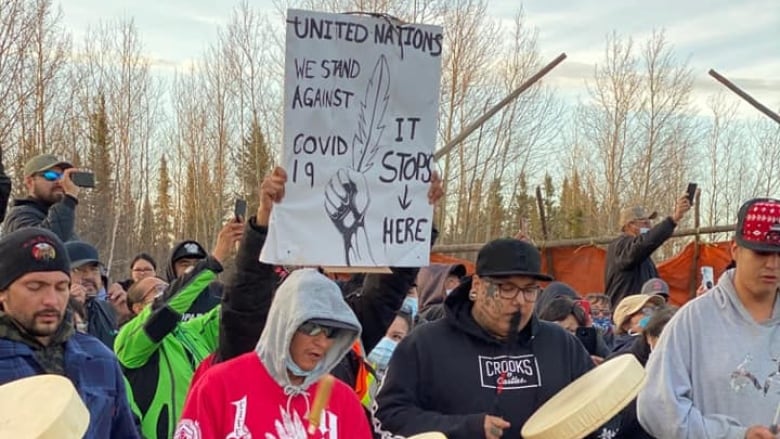 Four Cree Nations have agreed to remove blockades after reaching a deal with Manitoba Hydro over work at the Keeyask Generating Station in northern Manitoba during the COVID-19 pandemic, Manitoba Keewatinowi Okimakanak says.

Tataskweyak Cree Nation, Fox Lake Cree Nation, War Lake First Nation and York Factory Cree Nation had objected to Manitoba Hydro’s plans for a shift change that would see 700 people leave the project near their communities and bring in more than 1,000 different people, some from outside Manitoba.

Tataskweyak Cree Nation and Fox Lake Cree Nation had set up two road blockades to prevent the hydro company from carrying out the shift change.

Chief Doreen Spence of Tataskweyak was served with an injunction against the blockades on Wednesday.

“While we absolutely want our economies to open up and succeed, we are ultimately most concerned about the well-being and health of our citizens during this uncertain period. We want to keep everyone safe from this virus,” she said Sunday in the news release.

MKO Grand Chief Garrison Settee said in the release their ultimate concern was in protecting their communities from the threat of exposure to COVID-19.

“It took a stance from the First Nations to be able to get that message across,” he said Sunday in an interview.

Chiefs of the four First Nations, who are Manitoba Hydro’s partners in Keeyask, met with the Crown corporation’s president and CEO Jay Grewal on Saturday.

“I think that people are happy because that’s what they wanted. They wanted to have their voice heard and they wanted to be respected as partners and they also wanted to ensure that these decisions that are being made are not in exclusion of them,” Settee said. “They had no decision making, they had no input.”

It’s a move forward for the partnership, he said.

“That’s something that I’m very happy about.”

The corporation is pleased to reach an understanding that will see the project’s construction “resume safely, while protecting both workers and the surrounding communities,” Manitoba Hydro spokesperson Bruce Owen said in an email.

The blockades have been removed and the company “will not be renewing” its injunction, the statement said.

The next steps involve discussing how First Nations will take a more prominent role “in the way things would be going and, of course, the blockades have come down based on the two letters that were exchanged with the two entities agreeing to work together and turning back to the partnership,” Settee said on Sunday.

“I think that the situation was going to get volatile and I’m glad it did not escalate to that level,” he said.

“I’m very happy for the Cree Nation, and I’m thankful that the legal action that has been introduced, the injunction, is now, they’ve agreed to rescind that, and it was a good move forward.” SOURCE

Dana Hatherly with files from Riley Laychuk and Austin Grabish