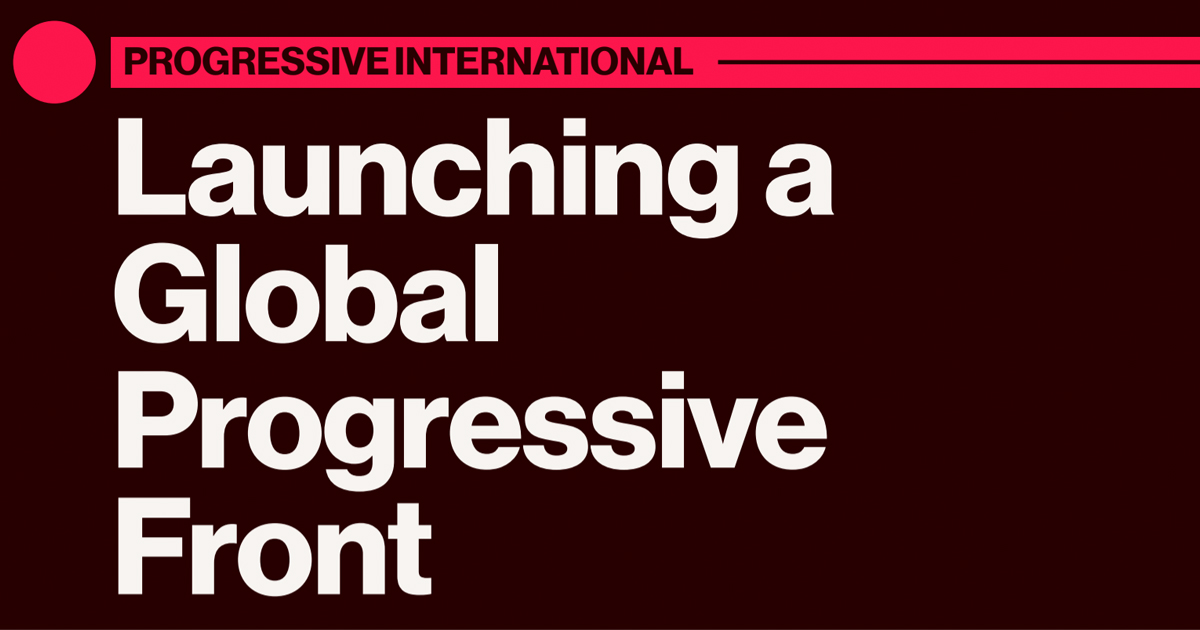 Only a common international front can match the scale of our crises, reclaim our institutions, and defeat a rising authoritarian nationalism.

Progressives the world over — democrats, libertarians and the Left — look eagerly forward to the inaugural Summit of the Progressive International (PI) in Reykjavik, Iceland, hosted by the Prime Minister of Iceland and the Left-Green Movement in the September this year. The process began in the ending months of 2018 at a meeting between the US Senator Bernie Sanders, representing the Sanders Institute and former finance minister of Greece Yanis Varoufakis on behalf of the Democracy in Europe 25 (DiEM25), a pan-European, cross-border movement of democrats, in November 2018, setting out a seven-year time limit (2025) to save the European Union from what it called as ‘guilty deceit’, leading to disintegration of EU. The Sanders Institute endorsed the concept at a gathering in Burlington, Vermont in the same month where an array of activists, thinkers and politicians gathered to discuss pressing issues like climate change, workers rights, and health and perceived the concept of broadening the struggle.

The PI is obviously very different from the political parties-based Second and Third (or Communist International or Comintern ) Internationals or the like. Comintern, founded mainly under the initiative of V I Lenin, clamped 21 conditions for seeking affiliation with it. Today, no party will agree to submit to such dictatorial imposition. Consider two of the 21. (a) Every organization desiring to join the Communist International shall be bound systematically and regularly to remove from all the responsible posts in the labor movement (party organization, editorship, labor unions, parliamentary factions, cooperatives, municipalities, etc.) all reformists and followers of the “center,” and to have them replaced by Communists, even at the cost of replacing at the beginning “experienced” opportunists by rank-and-file workingmen. (b) Every party desirous of affiliating to the Third International should renounce not only avowed social patriotism but also the falsehood and the hypocrisy of social pacifism: It should systematically demonstrate to the workers that without a revolutionary overthrow of capitalism no international arbitration, no talk of disarmament, no democratic reorganization of the League of Nations will be capable of saving mankind from new imperialist wars”. Even official Marxist parties that were affiliates of Comintern or split-away-s thereof are unlikely to endorse such conditionalities.

It is likely that the rules of membership will be mainly endorsing the 2597 word DiEM25 manifesto (https://diem25.org/manifesto-long/) that made membership open to both individuals and organisations. “The EU will be democratised. Or it will disintegrate! A Manifesto for Democratising Europe”.

In the founding DiEM25made its total opposition to the Brussels bureaucracy (and its more than 10,000 lobbyists) that calls the shots. Terming the unelected ‘technocrats’ from other international and European institutions as a Troika that successfully demolished the cardinal principles, based on which the EU was created, DiEM25 made a blistering attack against the hit-squad inspectorates and the Troika. “ Political parties appealing to liberalism, democracy, freedom and solidarity to betray their most basic principles when in government. Governments that fuel cruel inequality by implementing self-defeating austerity

Media moguls who have turned fear-mongering into an art form, and a magnificent source of power and profit Corporations in cahoots with secretive public agencies investing in the same fear to promote secrecy and a culture of surveillance that bend public opinion to their will”.

Stepping up its anger against the DiEM 25 snapped fingers at the EU. “Alas, today, a common bureaucracy and a common currency divide European peoples that were beginning to unite despite our different languages and cultures. A confederacy of myopic politicians, economically naïve officials and financially incompetent ‘experts’ submit slavishly to the edicts of financial and industrial conglomerates, alienating Europeans and stirring up a dangerous anti-European backlash. Proud peoples are being turned against each other. Nationalism, extremism and racism are being re-awakened….Its purpose is to prevent Europeans from exercising democratic control over their money, finance, working conditions and environment. The price of this deceit is not merely the end of democracy but also poor economic policies”. :

Announcing the formation of PI, Varoufakis said, “…in the midst of the Covid-19 pandemic —the Progressive International launched with a mission to unite progressive forces in a common planetary front. Now, we are kicking off the P.I. Forum with its inaugural event featuring five members of the PI Council: Prime Minister of Iceland Katrín Jakobsdóttir; Ugandan climate activist Vanessa Nakate; Greek MP and DiEM25 co-founder Yanis Varoufakis; Guatemalan human rights & tech lawyer Renata Ávila; and writer and political analyst Nanjala Nyabola from Kenya. At this historic juncture, we face a clear choice — a choice that PI Council member Noam Chomsky has described as “Internationalism or Extinction.” Either we bind our local struggles at the planetary scale. Or we surrender to an authoritarian capitalism that is grinding our species to extinction” The new global unity initiative and its t firmly anti-imperialist mood imbibes in part the principles of the International Working Mens’ Association (the First International), in 1864, drafted by Karl Marx. “

Evidently the two main personalities in shaping the PI are Varoufakis and Sanders- both known for their unequivocal commitment for liberty and progress. Varoufakis in his 21-page introduction to the Communist Manifesto, published in 2018, wrote “Liberty, happiness, autonomy, individuality, spirituality, self-guided development are ideals that Marx and Engels valued above everything else” Sanders in an unpublished essay, scheduled to have been published in an anthology on socialism, designed for today, on 1 May but postponed due to Covid 19 pandemic said: “his country. What I believe is that the American people deserve freedom — true freedom. Freedom is an often-used word but it’s time we took a hard look at what that word actually means. Ask yourself: what does it actually mean to be free?”