Birds living on river banks are ingesting plastic at the rate of hundreds of tiny fragments a day, according to a new study. 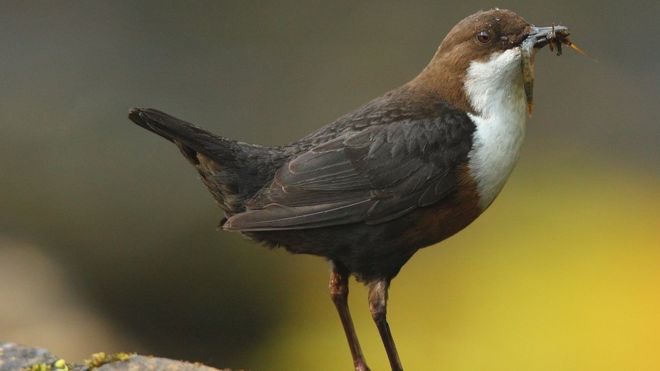 The dipper feeds on river insects

Scientists say this is the first clear evidence that plastic pollutants in rivers are finding their way into wildlife and moving up the food chain.

Pieces of plastic 5mm or smaller (microplastics), including polyester, polypropylene and nylon, are known to pollute rivers.

The impacts on wildlife are unclear.

Researchers at Cardiff University looked at plastic pollutants found in a bird known as a dipper, which wades or dives into rivers in search of underwater insects.

“These iconic birds, the dippers, are ingesting hundreds of pieces of plastic every day,” said Prof Steve Ormerod of Cardiff University’s Water Research Institute. “They’re also feeding this material to their chicks.”

Previous research has shown that half of the insects in the rivers of south Wales contain microplastic fragments.

“The fact that so many river insects are contaminated makes it inevitable that fish, birds and other predators will pick up these polluted prey – but this is the first time that this type of transfer through food webs has been shown clearly in free-living river animals,” said co-researcher Dr Joseph D’Souza.

The research team examined droppings and regurgitated pellets from dippers living near rivers running from the Brecon Beacons down to the Severn Estuary.

They found microplastic fragments in roughly half of 166 samples taken from adults and nestlings, at 14 of 15 sites studied, with the greatest concentrations in urban locations. Most were fibres from textiles or building materials.

Calculations suggest dippers are ingesting around 200 tiny fragments of plastic a day from the insects they consume.

Previous studies have shown that microplastics are present even in the depths of the ocean and are ending up in the bodies of living organisms, from seals to crabs to seabirds.

Rivers are a major route between land and sea for microplastics such as synthetic clothing fibres, tyre dust and other fragmenting plastic waste.

The research, published in the journal Global Change Biology, was carried out in collaboration with the Greenpeace Research Laboratories at the University of Exeter.