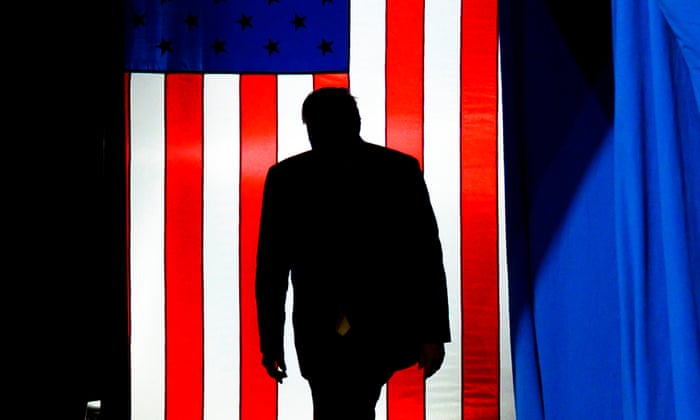 Nearly 100,000 Americans lie dead, almost 40 million people are out of work, home mortgage delinquencies are soaring and the Mall of America is stiffing its lenders. The US looks like one of the president’s brand-name casinos. When Donald Trump said “One day, it’s like a miracle, it will disappear,” he meant the coronavirus. He could have been referring to the American Dream itself.

The Atlantic writer David Frum argues that “democracy is tested by its ability to deliver security, prosperity, and justice”. By that metric, the Trump presidency is a shambolic failure.

In a book mostly written before the pandemic, Frum details the efforts of the 45th president to gut the rule of law and institutionalize “white ethnic chauvinism”, leaving the country reeling, the constitution bruised. Trumpian alchemy has turned gold to lead.

Trumpocalypse recalls that in 2016, Senator Ted Cruz compared Trump to Benito Mussolini, then “went to work” in his “cloakroom”. Most recently, the president has threatened Michigan and Nevada over absentee balloting and waged war on government inspectors general. Sacking Rome was quicker than building it.

Frum’s journey is emblematic of our ongoing political realignment. The Republican party’s embrace of rural and white working-class voters has been met with an exodus of college graduates and suburbanites. Reliably red Arizona is tilting toward Joe Biden because of defections among seniors and four-year degree holders.

Frum observes that in theology, the apocalypse was not ‘the end’ but the harbinger of a ‘new and better order’

Anti-closure protesters have toted Confederate flags, slung arsenals on their shoulders and left state legislatures in lockdown. Their avatar brags of medicating with hydroxychloroquine, a drug with side-effects that include paranoia, hallucinations and psychosis. Peloton moms are repulsed.

Over the past half-century, the GOP has morphed into the heir of George Wallace, the segregationist Alabama governor and presidential candidate, and Pat Buchanan, Richard Nixon’s paleoconservative speechwriter. The party of Abraham Lincoln and the upward arc is gone.

Frum was a speechwriter to George W Bush and helped coin the phrase “axis of evil”. Now he declares that 21st-century conservatism has “delivered much more harm than good, from the Iraq war to the financial crisis to the Trump presidency”. Yet he remains committed to his Burkean worldview, of individual autonomy fused to social cohesion.

Trumpocalypse quotes the late Senator Daniel Patrick Moynihan, that it is “culture, not politics, that determines the success of a society”. By the same measure, “politics can change a culture and save it from itself”.

Frum criticizes the effective disenfranchisement wrought by the electoral college but does not call for its abolition. That would be futile. Although the Republicans lost the popular vote in six of seven presidential contests since 1992, they captured the White House three times. Few surrender power for the asking.

After the debacle of 2000, Frum’s boss extended an olive branch to blue America. Bush sought to broaden his mandate. Trump still spits in half the country’s eye. Conciliation is not part of his DNA, or even his playbook.

Frum questions the legitimacy of the process if Trump wins re-election but finishes second again in the popular vote. He also homes in on the contradiction at the heart of Trumpian populism.

On the one hand, it is rooted in the belief that the silent majority should come first, not the elites. On the other, its operative dictum is “we should not choose our leaders just by counting who got the most votes”. Shades of Animal Farm: some folks are more equal than others.

Said differently, the people’s preferences should not be equated with “will of the people”. In the end, Frum says, Trumpism is about defending a “distinct way of life”, one challenged by modernity.

Frum makes clear that this outlook is shared by the cosseted segments of Trump’s base. Trumpocalypse quotes Peter Thiel, a pillar of Silicon Valley and an early Trump supporter, who sees democracy at odds with his libertarian ideals. Thiel has written that he “no longer believes that freedom and democracy are compatible”.

A PayPal co-founder and Kushner family partner, Thiel blames this decoupling on the “extension of the franchise to women”. He also contends that the welfare state has “rendered the notion of ‘capitalist democracy’ into an oxymoron”. Recent reports, however, describe even Thiel as displeased with Trump over his handling of the pandemic.

Trumpocalypse voices irreconcilable grievance. Still, Frum’s dismay is not directed at the president’s supporters, at least he tries not to. Frum understands that even if the incumbent loses re-election, the great American divide is not disappearing anytime soon.

More Americans favor a wall along the southern border than support granting government healthcare to the undocumented. Frum warns that “the election can be thrown away by people who will not meet voters where they are”.

Trumpocalypse proposes a series of reforms to rebalance the disconnect between the populace and electoral outcomes. Among other things, Frum urges abolishing the filibuster if the Democrats retake the Senate: “Don’t study or debate it. Just do it.” Right now, the odds of the GOP keeping the upper chamber are no better than 50-50.

As for climate change, the author opposes the Green New Deal but backs a carbon tax and carbon sequestration. In 2010, the GOP regained the House in part due to congressional Democrats passing a “cap and trade” tax.

Whenever Trump leaves office, his legacy will haunt. He was more than just a candidate, he embodied a movement. His children show no hint of leaving the stage.

Frum observes that in theology, the apocalypse was not “the end” but the harbinger of a “new and better order”. We’ll see. But Trumpocalypse is an apt title for these blighted times. SOURCE