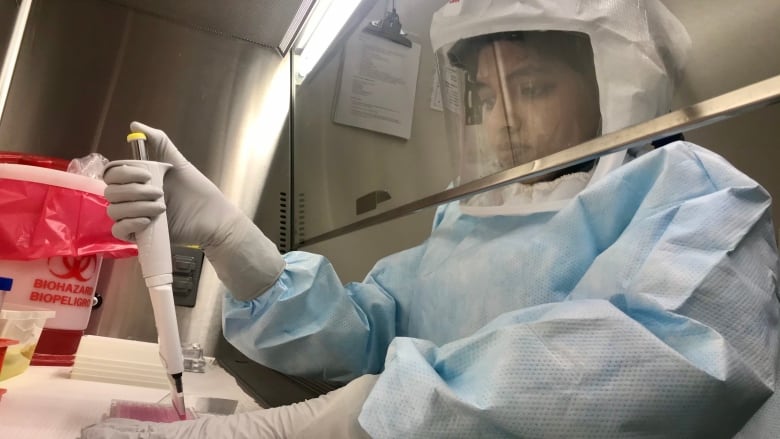 We trust scientists to tackle COVID-19, so why do so many people reject what they say about climate change? (Bonnie Allen/CBC)

The only long-term solution to the COVID-19 crisis is a vaccine and there is little doubt that medical experts will develop one. We take the importance of expertise of this sort for granted.

We rely on other people for expertise near every day. This is perfectly sensible.

Would you encourage a child to cross a bridge if you knew it wasn’t built by a civil engineer? Would you get in a plane that didn’t have a pilot? If you contracted COVID-19 and difficulties arose, would you go to the doctor?

We should turn to people who know more than we do — particularly for topics that are complex and important.

If you accept this logic, there’s no way you should reject the idea that humans are causing climate change.

It is indisputable that the most established experts on global climate – those whose job it is to understand our climate and who actively publish primary research on it – are effectively unanimous in their agreement that climate change is happening and that humans are the cause.

Seriously. Around 97 per cent of climate scientists agree.

If you see an interview or article or lecture from someone who is skeptical about climate change, you should check and see if the author has actually published scientific research on the topic. They almost certainly have not.

Those of us who are not experts on climate change (myself included – I am a cognitive scientist, not a climate scientist) have no justifiable reason to reject the expertise of those who are.

We all accept the value of expertise in our everyday lives. Those who reject the scientific consensus on climate change are, to put it bluntly, hypocrites.

‘There is no global conspiracy’

So why do people who normally trust expertise reject it for climate change? The answer has more to do with politics than climate science.

People with vested interests have been spending millions of dollars a year for three decades to trick us into believing either that there is not a scientific consensus on climate change (there is – see above) or that climate scientists are not credible experts (they are – see below).

For example, Craig Idso – a prominent climate change denier who has nonetheless not published on the topic since 2003 – was reportedly paid $11,600 per month in 2012 by the Heartland Institute, a conservative think-tank funded by the oil industry. Trust me, being employed as a scientist at a university is not nearly as lucrative.

Another planted argument is that climate scientists are pushing the global warming narrative in pursuit of grants and prestige. This is not really how prestige works in academia.

Think about the most well-known scientists of the past, such as Newton, Darwin, or Einstein. What they have in common is they gained notoriety and prestige by bucking the status quo, not upholding it. In short, they provided evidence that their colleagues are wrong.

For the same reason, there is a huge incentive for individual scientists to undermine the consensus on human-caused climate change – particularly given the strength of the consensus and importance of the issue. Successfully doing so would likely make them one of the most famous living scientists.

The fact that no one has done this indicates that the evidence probably just isn’t there.

‘It’s okay to say that you don’t know’

The unfortunate reality is that it is extremely easy to feel like an expert on a topic without actually being one. In fact, a lack of expertise makes it difficult to know whether you have sufficient expertise. If you don’t know the basic underlying science (it’s probably way more complicated than you think), then you can’t know that you don’t know it. This is referred to as the Dunning-Kruger effect.

The conclusion from all of this is quite simple. You should believe that humans are causing climate change precisely because you don’t understand it. At the very least, those of us who are not climate scientists should recognize that and remain agnostic. It’s okay to say that you don’t know.

This is not a call to stop trying to understand climate science. Do it. But whatever understanding you achieve, don’t forget to maintain some intellectual humility.

The same scientific process that gave you the technology you’re using to read this article has produced the consensus around human-caused climate change.

If you trust experts to build bridges, improve the battery life on your iPhone and build lifesaving vaccines, you should trust them on climate change.  SOURCE