For these communities, solidarity economics have been practiced out of necessity. But there are lessons we could all learn. 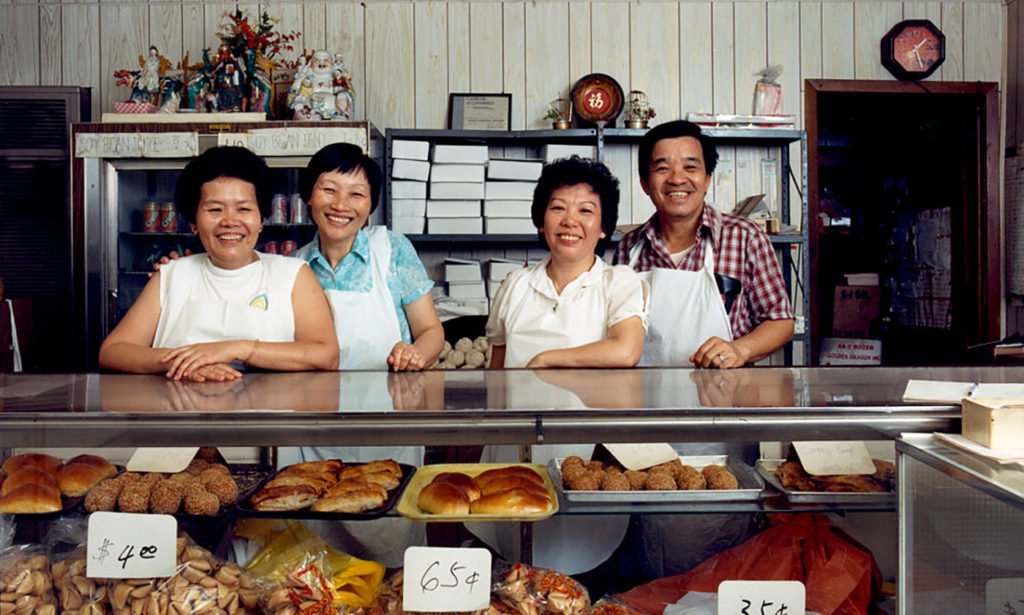 Cooperation and mutual aid have been a part of the Asian American experience ever since the earliest documented examples of immigration. Photo courtesy of Chicago History Museum/Getty Images.

sian American immigrants to the United States have long survived and persevered by practicing cooperation and mutual aid. New immigrants have faced hostile environments to their participation in the mainstream economy, either because of exclusionary legislation or because they lack paperwork. The standard trope about immigrants is that through hard work and perseverance new arrivals to the U.S. are able to pull themselves up by their bootstraps. In fact, Asian American immigrants have not only survived but also thrived because of these cooperative institutions.

Anh-Thu Nguyen knows this from first-hand experience. Her parents were Vietnamese boat people, part of the 2-million-person exodus who survived arduous journeys over the ocean from a country left destitute by the war. Both her mother and father were originally from the Mekong Delta region, but met in Florida, where there was an established Vietnamese refugee community.

She credits her family with teaching her the values of self-sufficiency and cooperation that guides her work today at the Democracy at Work Institute, where she directs the creation of cooperative-led value chains in the textile and fashion industries.

“Cooperatives weren’t a part of my language growing up, but it was what we did to survive,” Nguyen explains. “Cộng đồng means community, what ties you together. If you need to borrow money to buy a car, someone will help find a way to make it happen.”

Cooperation and mutual aid have been a part of the Asian American experience ever since the earliest documented examples of immigration. Collective help took the form of family associations and rotating credit practices. Early Chinese immigrants who arrived in San Francisco were met at the pier by representatives of family associations, who would escort the new arrivals to the association building and provide housing.

The associations also connected immigrants to employment and provided basic social insurance for their membership, such as medicine, burial expenses for the poor, and money for travel back to China for the indigent elderly. Membership was open to descendants of a particular clan or, even broader, those who shared the same regional affiliation in China.

Family associations and benevolent societies weren’t unique to immigrants from Asia. Germans had a version, Landsmannschaft, which supported students from the same part of the country studying abroad. However, what made these institutions was the political context of exclusion. Chinese were barred from entering into the U.S. if they were common laborers. Immigrants were admitted if they could prove they were merchants, scholars, or diplomats under the 1882 Exclusion Act. In addition, trade unions pitted white workers against Chinese workers, who were portrayed as docile and susceptible to the boss’ whims. Mutual aid associations provided benefits for members with shared family or ancestral histories.

Cooperatives flourished in broader Asian American communities as exclusionary laws initially passed to restrict Chinese immigration were applied to all Asians. Pilipinos, for example, started arriving in California in large numbers in the 1930s. The workers organized themselves as informal cooperatives under a leader from the same region who spoke the same language. That leader was responsible for getting farm jobs for his cooperatives and provided accommodations to the new arrivals. Members of the cooperative could borrow money without interest in the winter when seasonal farm work was at a standstill. The cooperative would also cover medical bills and burial expenses for members without resources.

Anh-Thu Nguyen’s mother, Phi Dang, is one contemporary beneficiary of cooperative economics. When Nguyen’s father passed away, Dang moved to Texas and supported herself by taking care of children in the neighborhood.

The parents of the local children worked long hours in low-wage service jobs such as nail salons and weren’t available to drop off and pick up their young children from school. Dang also provided meals for weary parents to pick up along with their children at the end of their shifts. “This was done informally not as a cooperative but as a loose mutual aid network,” Nguyen says.

Asian American immigrants also pool financial resources to help each other because, like many immigrants, they face obstacles to participating in mainstream banking and financial institutions, because they might not have access to financial information needed by banks, encounter strong language barriers, be distrustful of banks, or simply not have enough money to save. The Federal Deposit Insurance Corporation (FDIC) recently found that more than 20 percent of Asian Americans are “underbanked” or turned to alternative financial services in the past year.

Asian American immigrants instead turn to rotating credit associations, whose members grew up in the same region or attended the same school, and who contribute a fixed amount of money into a fund which is then distributed, at intervals, to each member in turn. Each ethnicity has its own form of these organizations, including the Chinese (who call this practice hui or ko), Japanese (tanomoshi or mujin), Koreans (kyes), Indonesians (arisan), and Indians (chits or kuries).

“With the ensuing climate crisis and widening wealth gap, our mutual survival is at stake.”

Most nail salon workers, for instance, are recent female immigrants. Most don’t have a history of work experience in their home countries, and many lack the legal paperwork to live in the U.S. and open a bank account. A study of nail salon workers in New York City published in the International Migration Review found that many participate in these lending circles in order to pay for household expenses, children’s college tuition, and mortgage or rent payments. In addition to sharing money, the associations also help to bridge the social isolation and stress the low wage workers often face.

Cooperative practices sometimes originate in the ancestral country and are replicated in the U.S. Julia Ho, for instance, is a second generation Taiwanese American whose grandfather started a farmers cooperative in rural Taiwan. The members of the co-op would pool their money to purchase seeds every year for harvest. Although Julia’s mother, Jui-Lien Chou, immigrated to the U.S. in the 1980s to study medicine, in 1999 she purchased a 259-acre cotton farm in Lubbock, Texas, which she converted into a USDA-certified organic farm. Named Tree Grace Farms, after Chou’s father Shu-En (樹恩), the farm is now a hub for organic agriculture, supporting edible school gardens, donating produce to a local food bank, and offering shares in a community-supported agriculture.

Ho credits her mother’s influence on her decision to become a community organizer against police brutality in Ferguson, Missouri,  and to work as coordinator of Solidarity Economy St. Louis.

“I realize that I’m doing the work my mom does,” Ho says. “My goal is to make room in the solidarity economy movement for people like my mom, who doesn’t consider herself a social justice organizer, but is clearly doing the things that all of us are talking about.”

Although cooperative economics have been practiced out of necessity by Asian American immigrants as a way to survive a hostile country that excluded their participation in the mainstream economy, Nguyen thinks that there are lessons that all communities could draw from.

“In our current age, with the ensuing climate crisis and widening wealth gap, our mutual survival is at stake. It’s not really an option to go at it alone,” she explains. “That’s the big thing to learn from refugee communities, we have to lift each other up.” SOURCE