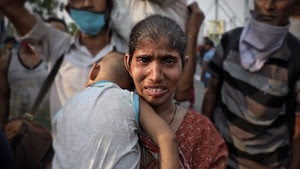 They say a picture is worth a thousand words — but this one left me speechless.

A hungry mother in India, baby in her arms, bursts into tears after queuing for food — only for it to run out before she could get any.

Now the UN is warning the world is on the brink of a famine of ‘biblical proportions’ with a QUARTER OF A BILLION people, like this young mum, staring starvation in the face!

Brave local groups and aid workers are working around the clock to fight this ‘hunger pandemic’, doing all they can to feed hungry, desperate children, and fight the virus. But they’re working on a shoestring, and they need our help!

There’s 60 million of us — let’s go all out to urgently raise more than ever, and Avaaz will give 100% of the funds to those doing heroic work to feed families, and save lives from COVID-19. Chip in now and let’s together join this epic global effort so no one has to watch their children starve:

Our movement has raised millions over the years for trusted relief groups working with the world’s most vulnerable people, delivering food and medical assistance to those most in need. Since this crisis began, our team has had dozens of emails from them asking us if we can help.

If we raise enough, here’s what we could get done:

Each and every one of us can make a difference that saves lives — and every life saved is priceless. Let’s all give what we can — every single penny we raise will be given away to amazing humanitarian groups doing critical work on the ground, to keep people alive and safe through this crisis. Chip in now to save lives:

Our movement has done so much to protect the vulnerable in this crisis. We’re already supporting a brave Maasai community to protect their land and their people, and we’ve helped win debt cancellation for poor countries, pushed for a global ceasefire, and stood up to protect the World Health Organisation when it came under attack. Now we need to raise funds to stave off a starvation crisis, and help protect the medical workers doing heroic work all over the world — so let’s come together again.

In solidarity and hope,
Marigona, Bert, Mike, Martyna, Sofia, Meetali, Francesco and the rest of the Avaaz team.

PS: The cost estimates above come from Avaaz partners on the ground. They are based on the costs of providing each person with one meal, and include essential foods like rice, lentils, oil and salt. The more we raise the more people we can help feed!

PS – This might be your first donation to our movement ever. But what a first donation! Did you know that Avaaz relies entirely on small donations from members like you? That’s why we’re fully independent, nimble and effective. Join the over 1 million people who’ve donated to make Avaaz a real force for good in the world.

Coronavirus pandemic ‘will cause famine of biblical proportions’ (The Guardian)
https://www.theguardian.com/global-development/2020/apr/21/coronavirus-pandemic-will-cause-famine-of-biblical-proportions

‘People don’t realise what is coming’: How a coronavirus crisis would unfold in war-torn Syria, Yemen or Libya (The Independent)
https://www.independent.co.uk/news/world/middle-east/coronavirus-syria-yemen-libya-cases-update-death-toll-doctors-a9440486.html

Courageous health workers on the frontline in a time of deadly COVID-19 (Relief Web)
https://reliefweb.int/report/bangladesh/courageous-health-workers-frontline-time-deadly-covid-19