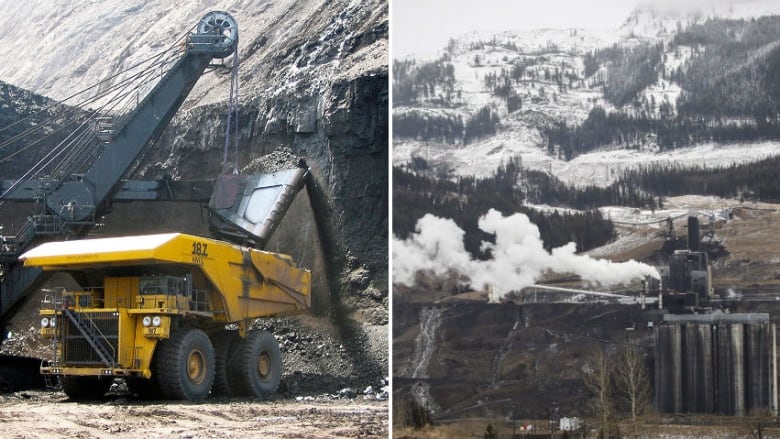 File photos of coal mining operations in Wyoming, left, and Sparwood, B.C., right. Alberta is cancelling a policy that had been in place since 1976 prohibiting open-pit coal mining in wide swaths of land throughout the western side of the province. (Matthew Brown/Associated Press, Jeff McIntosh/Canadian Press)

Alberta is cancelling blanket environmental protections that have been in place since the 1970s and making it easier to develop open-pit coal mines in some of the province’s most ecologically sensitive areas.

For decades, wide swaths of the province’s Foothills and Rocky Mountains were off-limits to this type of mining, under what was dubbed the “Coal Policy” of 1976.

The provincial government says the policy is outdated and redundant and eliminating it will encourage substantial new investment. Environmentalists say the move will create a high-level regulatory void, as the policy provided a holistic approach to protecting ecosystems, wildlife and Alberta’s headwaters.

“Without this, we don’t really have a system in place that is enforceable and has evidence-based limits on total land disturbance from industrial operations,” said Nissa Petterson with the Alberta Wilderness Association.

The Coal Policy governed coal leasing, exploration and development across four categories of land that encompass most of the western portion of the province.

It is now set to expire on June 1.

The government says similar protections will remain in place in former “Category 1” lands — indicated in yellow in the map below — which include most but not all of Alberta’s Rocky Mountains.

It says the restrictions in the other three land categories — indicated in blue, pink and purple — are no longer needed.

“When these categories were created, land use planning hadn’t yet been completed, supporting infrastructure was lacking and there were environmental concerns that the existing regulatory processes weren’t equipped to address,” the province says on its website.

Environment Minister Jason Nixon says the government will continue to protect “critical watersheds and biodiversity along the eastern slopes of Alberta’s Rocky Mountains” through other means.

“Through this approach we are striking the balance of ensuring strong environmental protection with providing industry with incentive to increase investment,” Nixon said in a news release announcing the policy change, which was sent out last Friday afternoon, before the May long weekend.

Petterson says the announcement came out of the blue, with no indication such a change had been in the works and no public consultation.

“That doesn’t really seem like an open conversation for a resource that’s owned by Albertans,” she said.

“Albertans should have a say and, unfortunately, this government hasn’t demonstrated a lot of consideration towards consulting the public on some of the decisions that they’ve made related to the environment.”

New mine proposals to go to regulator

Once the Coal Policy is rescinded, proposals for new mines will go directly to the Alberta Energy Regulator, without the previous restrictions.

But Petterson says it’s “misleading” to say the Coal Policy is redundant with newer regulations.

She says the decades-long policy “operated at a higher level” and helped Alberta “effectively manage cumulative-effect impacts on watersheds and wildlife and our wild spaces.”

She worries about former Category 2 lands, in particular, which cover 1.4 million hectares of territory that she described as having moderate to high environmental sensitivity. The previous policy prohibited open-pit mines on those lands and allowed only underground operations “where surface effects of the operation are deemed to be environmentally acceptable.”

Kevin van Tighem, a spokesman for landowners in one of the affected areas in the Foothills, says the region already exceeds what are supposed to be development limits.

He says the Foothills are also home to threatened species and are crucial to water supplies for the southern Prairies all the way into Saskatchewan.

‘Coal’s not going away’

“Rescinding the outdated Coal Policy in favour of modern oversight will help attract new investment for an important industry and protect jobs for Albertans,” she said in a release.

Robin Campbell is a former Alberta environment minister and current president of the Coal Association of Canada. He says everyone in the industry that he has spoken with has been “quite pleased” by the province’s move.

He says Alberta has vast deposits of high-quality coal — especially steel-making coal that is in high demand in Japan, China and South Korea.

He says it was possible for companies to apply for an exemption to the Coal Policy’s restrictions in the past but that it was cumbersome and rescinding the policy removes a major hurdle to investment.

“For example, around Rocky Mountain House, we have a couple of projects that were on Category 2 lands. This now allows them to move forward. It allows them to go out and raise money in the international community. And it allows them to start building an operation, which is going to create jobs.”

The coal industry “is very beneficial to rural communities,” Campbell said, and “there are very stringent regulatory obligations that companies have to meet before they can start construction.”

“You’re looking at a lot of money to build a mine — somewhere in the $750 million to $1 billion range — so people who are going to invest in the coal industry want some certainty,” he added.

Campbell estimates there are “at least a half a dozen” companies currently looking at developing mines on lands where it would have been previously prohibited and “there will be more.”

“Coal’s not going away,” he said, “as much as some people like to think it is.” SOURCE

With files from The Canadian Press