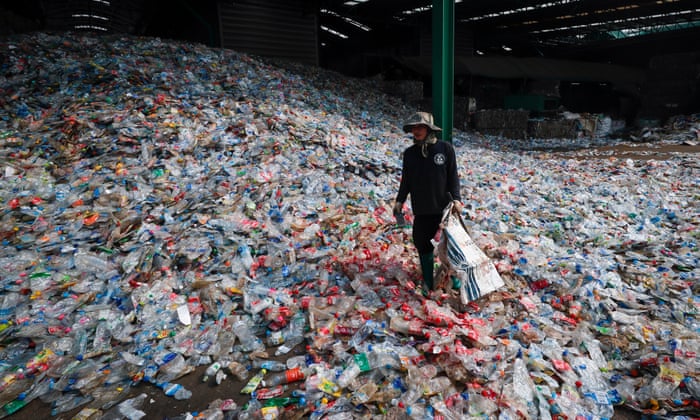 A mound of plastic bottles at a recycling plant near Bangkok in Thailand. Around 300 million tonnes of plastic is made every year and most of it is not recycled. Photograph: Diego Azubel/EPA

Beer and soft drinks could soon be sipped from “all-plant” bottles under new plans to turn sustainably grown crops into plastic in partnership with major beverage makers.

A biochemicals company in the Netherlands hopes to kickstart investment in a pioneering project that hopes to make plastics from plant sugars rather than fossil fuels.

The plans, devised by renewable chemicals company Avantium, have already won the support of beer-maker Carlsberg, which hopes to sell its pilsner in a cardboard bottle lined with an inner layer of plant plastic.

Avantium’s chief executive, Tom van Aken, says he hopes to greenlight a major investment in the world-leading bioplastics plant in the Netherlands by the end of the year. The project, which remains on track despite the coronavirus lockdown, is set to reveal partnerships with other food and drink companies later in the summer.

The project has the backing of Coca-Cola and Danone, which hope to secure the future of their bottled products by tackling the environmental damage caused by plastic pollution and a reliance on fossil fuels.

Globally around 300 million tonnes of plastic is made from fossil fuels every year, which is a major contributor to the climate crisis. Most of this is not recycled and contributes to the scourge of microplastics in the world’s oceans. Microplastics can take hundreds of years to decompose completely.

“This plastic has very attractive sustainability credentials because it uses no fossil fuels, and can be recycled – but would also degrade in nature much faster than normal plastics do,” says Van Aken.

Avantium’s plant plastic is designed to be resilient enough to contain carbonate drinks. Trials have shown that the plant plastic would decompose in one year using a composter, and a few years longer if left in normal outdoor conditions. But ideally, it should be recycled, said Van Aken.

The bio-refinery plans to break down sustainable plant sugars into simple chemical structures that can then be rearranged to form a new plant-based plastic – which could appear on supermarket shelves by 2023.

The path-finder project will initially make a modest 5,000 tonnes of plastic every year using sugars from corn, wheat or beets. However, Avantium expects its production to grow as demand for renewable plastics climbs.

In time, Avantium plans to use plant sugars from sustainable sourced biowaste so that the rise of plant plastic does not affect the global food supply chain. SOURCE