Some cities are closing off streets so families can safely cruise. On the road or the trail, here’s how to have a successful adventure on wheels. 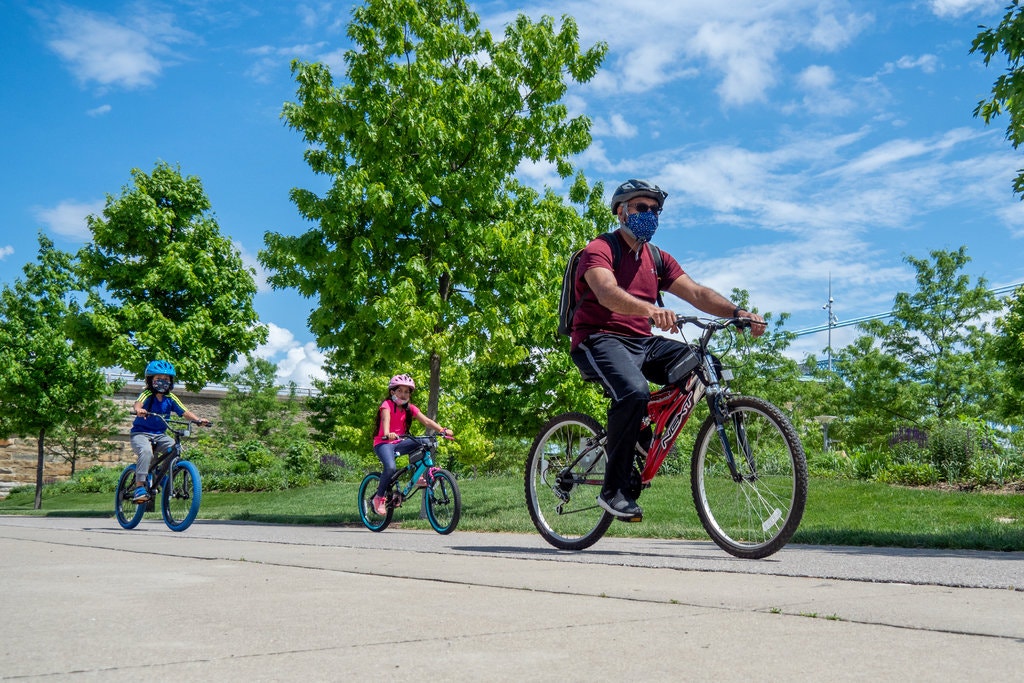 The humble bicycle is the surprise star of lockdown. With youth sports on hold, car traffic down 75 percent or more throughout the country (according to the research firm StreetLightData), and cooped up kids doing parkour on living room furniture, family bike rides have never sounded better.

“Since Pokémon Go started I have not seen so many people out,” said Tara Goddard, an assistant professor at Texas A&M University who studies transportation and urban planning. “I live in a place with a huge number of single-family homes with yards, and it’s clear that’s not enough. People want to move and get out and be around people in a safe way.”

Bike rides offer all of that.

If your beach cruiser has mostly served as a drying rack for the past decade, it’s time to put it back to its intended use. Before you roll, though, you need to know a few things about keeping your family safe — and having fun — out on the road or trail.

Have the right equipment. Your bike doesn’t need to be fancy or expensive, but it does need to work. If it has been a while since you’ve ridden it, consider taking it to your local shop (which in many states is an essential business) for a basic tune-up, Dr. Goddard said. If you don’t have the cash for that, at least do a basic safety check, suggests Diana Hildebrand, a bike advocate and certified cycling instructor in Cleveland. She uses the abbreviation A.B.C.Q.:

For kids, the right equipment is the bike that’s going to give them the most confidence, said Arleigh Greenwald, who runs Bike Shop Girl, a family-oriented bike shop in Denver. Sizing is a big part of that. Avoid the temptation of buying a bike a child will “grow into,” as that too-big bike can feel scary and hard to control.

For younger kids, parents will need to choose whether a pull-behind bike trailer or an add-on seat on their bike is a better option. Mrs. Greenwald said that is an individual choice. Both have benefits and drawbacks. Riders, however, should be aware that a baby seat on a bike will change a bike’s handling — and you’ll need a stronger kickstand to make up for the added weight.

Does proper equipment require a helmet? For your kids, yes. In many municipalities, children must wear helmets. They need to fit properly, too, which means covering your forehead and having straps that fasten snugly under your chin. The National Highway Traffic Safety Administration offers a good guide, if you’re not sure if you’ve got the proper fit. For adults, they’re probably a good idea, though some bike advocates argue they are not as useful as people think. For example, Dr. Goddard says there is evidence that helmets may make drivers, and to some degree cyclists, less careful, because they give a false sense of security. Helmets, of course, won’t protect cyclists from the blunt force trauma of a pickup truck to the abdomen. Still: The aftereffects of traumatic head injuries are real and serious, and helmets may protect you in certain types of falls. Also, for parents: Your kids are watching. If you want them to take traumatic brain injuries seriously, it’s probably easiest to just model the behavior you want them to adopt.

Protect yourself. Unless you’ll be riding deep out in the country, proper equipment includes a mask. Because many bike paths are seeing upticks in use, it’s hard to guarantee that you won’t run into other riders, and while transmission risk while briefly passing someone outside is quite likely low, the Centers for Disease Control recently issued guidelines suggesting that everyone wear masks in public spaces. To keep enough space between you and other riders, wait to pass until the road is wide enough to give plenty of space.

Start in a parking lot. All those empty parking lots make perfect places to hone your skills, said Alison Dewey, the director for education at the League of American Bicyclists. You can use existing lines to perfect stopping quickly and making tight turns. Or you can draw your own obstacle course with chalk, Dr. Goddard said. She points to something called “traffic gardens,” or courses used to teach kids the rules of the road in Europe. Draw out streets, stop signs, even your favorite destinations — like the ice cream shop — and let your kids practice turning and stopping on their way around “town.”

Make it a game. Right now, pathways and off-road bike trails are crowded, which means cyclists may need to pass on the grass to maintain proper social distancing. Learning how to ride on a variety of surfaces, like grass and gravel, is important — and a good confidence booster — Mrs. Hildebrand said. Consider playing follow-the-leader through a nearby park, soccer field or green space to practice riding on dirt, gravel, grass and any other surfaces you can find.

One of Ms. Dewey’s favorite bike games is having a “turtle race.” Pick a point and see who can get there the slowest. “The person who puts their foot down first is out,” she said, adding that staying upright while crawling along will really boost your kids’ on-bike stability.

Bike polo, using a beach ball or whiffle ball and a couple of brooms, can be a fun way to get everyone feeling confident riding with one hand, in a group, and making tight turns. Not to mention, it’s impossible to play without laughing at the sheer ridiculousness of the game.

Have a family plan. Knowing what you’ll do in an emergency and how you’ll communicate on the road is vital to having a fun ride, Mrs. Hildebrand said. Before you head out, make sure you’ve covered the following:

Cycling when you feel scared isn’t much fun, so picking a place to ride that feels safe is the key, Dr. Goddard said. The good news is that many cities are making rapid changes to try to accommodate social distancing as more families ride outside. In May, Seattle announced it would permanently close 20 miles of low-volume streets to through traffic to make room for more bikes and pedestrians. New York recently announced it would temporarily close 12 miles of streets.

If you aren’t near any closed streets, consider letting your city know how much safer streets would mean to you. Then, look for routes where traffic moves slowly, Dr. Goddard said. Sometimes that means opting for a street that may be narrower but sees more languid traffic. “If drivers have to move more slowly that tends to feel a lot safer,” she said. Consider elevation gain, too. Google Maps shows topography, so you can make sure you aren’t in for a monster hill climb.

Mrs. Greenwald always rides her planned route at least once by herself before bringing her kids out. “I look at the route and I try to predict: One, what will traffic be doing? And two, what will they do?” she said, meaning her children. She also looks for trouble spots, for example, whether to ride onto the sidewalk to cross at a particularly dangerous intersection.

You can also just ask other riders. Cyclists love to help other cyclists find safe routes, because the more bikes that are out, the more drivers are primed to watch for riders and the safer things tend to be for cyclists. Consider posting on a neighborhood site like NextDoor, or in a local Facebook group, that you’re looking for quiet roads to ride. People for Bikes, a cycling advocacy group, offers an app with low-stress rides called RideSpot, which may be a good jumping-off point for finding a safe route near your home.

Ditch your own workout goals. These rides are not going to get you in shape for that summer triathlon, but that’s fine, because that triathlon is most likely canceled. Mrs. Greenwald suggests starting with just 15-minute outings until you get an idea of your family’s fitness and stamina. Let the slowest rider set the pace, and make the trip about having fun — not burning off dinner. “For me, it’s never just the bike ride, it’s the destination. Maybe we’re going to the creek to find ducks, or we’re going for ice cream. The ride is part of that, and now my daughter loves going on bike rides,” she said.

Pack a few things. A first-aid kit is a must, Mrs. Hildebrand said. Hers always has Band-Aids, hand sanitizer, alcohol wipes and poison ivy lotion just in case they go exploring off-road. If your child has allergies or asthma, bring an extra inhaler and EpiPen. And bring snacks and water. “Kids will get dehydrated before you do,” she said, adding that trying to coax a hungry child through the last mile of a bike ride is no one’s idea of a good time.

Do what you need to do to feel safe. Dr. Goddard is a firm advocate in cycling where you feel safest, even if that’s the sidewalk. However, she adds that the sidewalk has its own problems. To begin with, some municipalities ban bikes on sidewalks. You’re also outside the main line of sight of many drivers. If a driver turns into a driveway, you may not be seen. That said, there’s never shame in getting off your bike and walking until you feel it’s safe to begin riding again. SOURCE