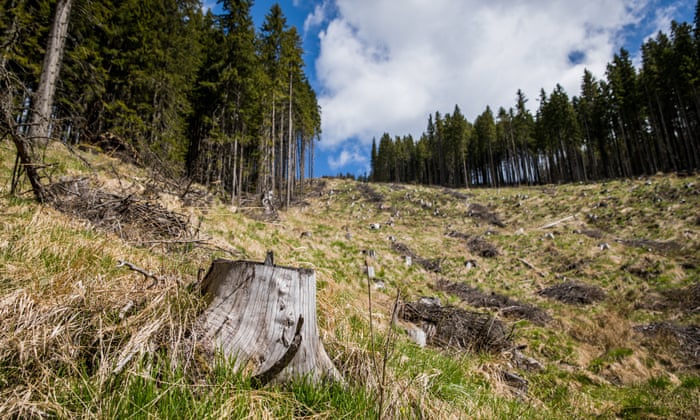 Many countries have been preyed on by logging companies. Photograph: Ioana Moldovan/Greenpeace Romania

The European commission will launch a sweeping effort to tackle the global biodiversity crisis on Wednesday, including a call for 3bn trees to be planted in the EU by 2030 and a plan to better protect the continent’s last primeval forests.

The draft policy document, published online by an environmental NGO, admits that to date in the EU, “protection has been incomplete, restoration has been small-scale, and the implementation and enforcement of legislation has been insufficient”.

Scientists and environmental groups, commenting on the leaked draft of the strategy, say that while the new goals are welcome and impressive, there is a still distinct lack of tools with which to implement them.

“It’s a good and ambitious document, but what is also obvious is the lack of strategy of how to implement it, and a lack of discussion of why previous documents of this type failed,” said Przemysław Chylarecki of the Polish Academy of Sciences.

The new strategy calls for nearly one-third of EU land and sea to become protected zones. Currently, 26% of land and 11% of seas are classed as protected areas, but the European commission acknowledges this has not been enough to tackle the degradation of the natural world and threat of extinction to some birds and animals. Environmentalists say even these previous targets for protection have not been met in practice.

“The proposed strategy lacks game-changing ideas and instruments for reaching the targets. We already know today that existing frameworks are not delivering, so why should we wait,” said Robert Cyglicki, programme director of Greenpeace in central and eastern Europe.

He welcomed the new strategy but said it would be 2024 before it became clear if new binding measures would be adopted, and called for immediate discussions over funding and enforcement mechanisms.

Some elements of the programme, such as protecting migratory bird populations, are hard to implement without a global approach, and the paper calls on the EU to intensify efforts to make biodiversity a central part of its diplomacy.

It concludes that global efforts to tackle the biodiversity crisis under the auspices of the UN have been “insufficient to halt the loss of the world’s biodiversity”.

It will also turn the spotlight on the EU’s €60bn-a-year common agricultural policy, which has been criticised for fuelling a steep decline in nature, with a call for a quarter of the EU’s agricultural land to be organically farmed by 2030.

Environmentalists warned the plan’s headline target to plant at least 3bn trees by 2030, “in full respect of ecological principles”, should only be a small part of the solution.

“Planting 3bn trees is a really spectacular and visual goal, but it has been shown that planting new trees is not a panacea and doesn’t always help,” said Chylarecki.

More important will be the goal to map, monitor and “strictly protect” the EU’s last remaining primeval forests, which have survived in almost every member state, but remain threatened by human activity, such as illegal logging.

These older forests provide a natural shield against climate change, but in many countries have been preyed on by logging companies, with national governments either ignoring the situation or lacking the resources to properly police logging.

Why are trees good for the environment?

“We believe an integrated approach that also includes smart financial mechanisms and social aspects is the key aspect of a future European biodiversity governance framework,” said Romania’s environment minister, Costel Alexe, who has said he wants to better protect the large area of old-growth forests in the country.

César Luena, a Spanish socialist MEP and vice-chair of the European parliament’s environment committee, agreed that the 2030 targets “will need to be covered by legislation to make them binding” on member states.

“If the new strategy remains just a collection of ideas, nothing will ever happen,” he said in emailed comments. He said the strategy “seems more ambitious than the previous one but there are still areas for improvement”.

Luena said EU member states needed to comply with existing laws, noting that in the last week alone, the European commission launched legal action against 19 governments over failures on EU environmental law – a tally of charges far from unusual in the commission’s monthly round up of infringement proceedings.

Sweden and Latvia have been accused of not implementing parts of the EU’s birds and habitats directives, Malta is faulted for not conserving endangered bluefin tuna, while France, Cyprus and Lithuania are said to have neglected to write EU air pollution standards into national law.

The EU should also offer funding benefits for those governments serious about hitting targets, said campaigners.

“At the EU level we need some sort of financial stimulus that would make it attractive for countries to focus on biodiversity,” said Marta Grundland, a campaigner with Greenpeace Poland.

“Right now, I don’t feel it’s a EU priority or a national priority. After climate this is the second biggest threat we are facing, and it’s all connected. If we want to help with the climate crisis we should also tackle the biodiversity crisis.” SOURCE