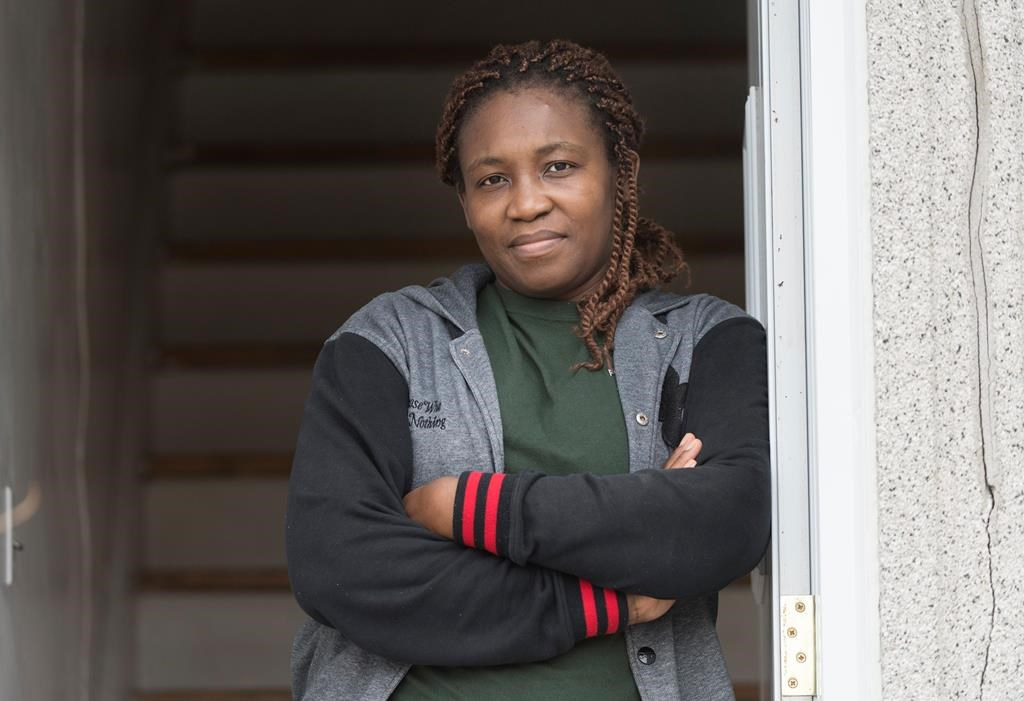 Carole Ze Benedicte, who is originally from Cameroon, poses at the entrance to her apartment in Montreal, on Saturday, May 16, 2020. File photo by The Canadian Press/Graham Hughes

Some of the of asylum seekers who have come to Canada in recent years have found the path to a new life has taken them straight to the front lines of Quebec’s COVID-19 crisis, where hundreds are believed to be working in hard-hit long-term care homes.

Ze Benedicte Carole, an asylum seeker from Cameroon, is recovering at home after being infected with COVID-19. She was working as a volunteer at a long-term care home in Montreal’s west end.

The 34-year-old, who arrived in Canada four years ago as a temporary foreign worker, said she started looking for a way to help her adopted country after being laid off from her job in food services.

When Premier Francois Legault called for more people to sign up to become “guardian angels,” as he has repeatedly called those working in health and long-term care homes, she volunteered.

“My dream has always been to work in a (long-term care home) to help people who are in trouble, and to feel important in society,” she said.

Ze Benedicte said she was assigned to what was supposed to be a “cold” zone of a care home, where she helped with tasks such as cleaning. But soon after, residents in her area were found to be carrying the virus.

Three days later she started experiencing headaches, fevers and muscle pain, despite having worn a mask, gloves, gowns and visors.

When she called the province’s COVID-19 telephone line, she says she was told by a health-care employee that she couldn’t get a test because she didn’t have a medicare card — despite having a social insurance number and having worked in a COVID-positive environment. Feeling demoralized, she started to cry.

“When we die at the front lines, we’re called guardian angels,” she said. “But when we need to be treated on equal footing, we’re not guardian angels. We’re nobody, we’re invisible.”

Ze Benedicte, who was eventually able to get tested after seeking help from a migrant rights group, says she’s finally feeling better two weeks later despite persistent fatigue and aches.

She says she’s eager to return to work and hoping to eventually work in a long-term care home full time.

She is one of thousands of asylum seekers who have taken jobs in long-term care homes or other front-line services, where some are paying the price for their decision to care for others.

Montreal North, where many asylum seekers have settled, has the highest infection rate in the city, spurred by crowded housing conditions that make social distancing impossible and a population that largely works in essential jobs such as food production, health care or security.

Ruth Pierre-Paul, who advocates on behalf of Montreal’s Haitian community, says hundreds of those who crossed the border irregularly in recent years have sought out jobs in long-term care homes as a quick way to enter the workforce, due to a short training period and large bank of available jobs.

She and other advocates are calling on the Quebec and Canadian governments to grant permanent residence to the many asylum seekers who are working in essential services as a recognition of their work during the pandemic.

“These people are living a double stress: they have to work and are on the front lines of a battle that could put them in the grave, with a status that gives them no benefits and makes them more vulnerable,” Pierre-Paul said.

She said asylum seekers don’t have access to subsidized daycares or Quebec medicare cards and aren’t covered by the provincial workplace health and safety board despite working some of the riskiest jobs.

Ze Benedicte, who supports the calls for permanent residency, also worries about those who are undocumented, who can’t access emergency financial aid.

Last week, independent legislature member Catherine Fournier tabled a motion to recognize the contribution of “hundreds of asylum seekers, mostly of Haitian origin,” working in long-term care homes, and to ask Ottawa to “quickly regularize their status, in order to recognize the work accomplished during the current health crisis.”

The motion was rejected by Legault’s party, with the premier later appearing to suggest it could encourage more asylum seekers to cross the border, which is currently closed due to the pandemic.

“They’re asking me to support the arrival of asylum seekers,” he said when questioned. “Neither the government of Quebec or Canada supports that now.”

Pierre Kiosa Nakatala, 45, brought his family to Canada last year through the unofficial border crossing that has popped up at Roxham Road, on the Canada-U.S. border, after fleeing violence in the Democratic Republic of Congo.

Motivated by his Christian faith and a love of caring for the elderly that began with his own grandmother, he trained to become an orderly. Now, he’s working long shifts tending to the sick and sometimes the dying in a hard-hit care home in Montreal North.

Many of his colleagues have gotten sick, meaning that two workers now have to do the work of three or four.

He worries about catching the virus and taking it home to his wife and three young children, who don’t always understand they can’t hug their father until he’s had a shower.

While he hopes to be granted permanent residency, he says it’s not his main motivator in working in the care home.

This report by The Canadian Press was first published May 18, 2020