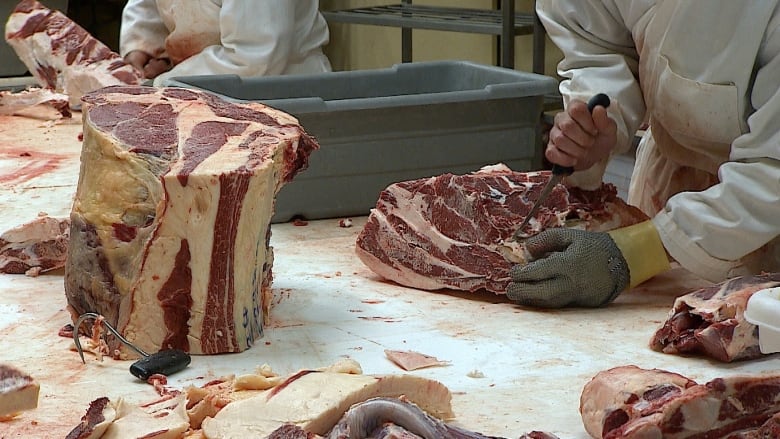 Beef being prepared for sale at Ben’s Quality Meats, a family owned, small-scale processing facility in Picture Butte, Alta., which handles about 200 head of cattle per week. (Erin Collins/CBC)

Michael Munton’s family has been ranching in southern Alberta for four generations.

The Angus cattle they raise are the same they’ll later take to their small processing facility and sell to customers as roasts, ground beef and steaks from their own store in the town of Picture Butte. They handle about 200 head of cattle per week.

“That relationship, that network of knowing that person that cuts your steaks, that package your ground beef — that’s a real value in my mind,” said Munton, owner of Benchmark Angus and Ben’s Quality Meats.

As COVID-19 has interrupted production at big meat processing plants across North America, there’s been greater attention on smaller facilities and the role they play in a complex meat supply chain.

The pandemic has led to the slowdown or temporary closure of meat processing plants in Canada, including last week’s shuttering of a processing facility near Montreal after it reported 13 per cent of its workforce had been diagnosed with COVID-19. The Canadian Meat Council, which represents meat processors, recently said that all plants are running slower than usual as they move to protect employee safety.

And there’s discussion among industry observers, the National Farmers Union and players within the supply chain, about whether Canada needs a greater number of smaller-scale and mid-sized processors to help make the overall system more resilient to potential slowdowns, or shutdowns, at large plants.

‘Other processors will be able to step up’

It’s something Munton has heard from ranchers and retailers alike.

“The big processors, nothing against them, they are that size and that’s wonderful,” Munton said.

“But if there’s lots of other smaller processors that are able to fill the void —  if someone being shut down, whether it’s COVID-related or mechanical or some other type of situation that causes them limitations — the other processors will be able to step up and … not leave such a large void that’s in the marketplace currently.”

The Canadian meat industry is big business. According to the Canadian Meat Council, red meat consumption and exports supported 288,000 jobs across the country in 2016. From farm to fork, it generated $15.3 billion of economic activity in Canada the same year.

But neither is running at full capacity these days because of the impact COVID-19 has had on more than 1,500 workers at these facilities. Three workers employed by the Alberta facilities have died, as well as the father of a worker.

The situation, including the temporary closure of Cargill’s plant near High River, has resulted in a backlog of more than 100,000 cattle in Alberta alone, according to an estimate last week from the Canadian Cattlemen’s Association.

‘We count on cheap food’

Across North America, consolidation in the meat processing industry over the past few decades has also seen the emergence of larger plants. It’s been a process driven by both business and consumers.

“We count on cheap food,” said Mike von Massow, a food economist at the University of Guelph.

“These larger plants allow for large volumes and greater efficiencies.“

While those larger plants have made meat more affordable for shoppers — and profitable for processors — some argue that it has also made the system more vulnerable.

“Big is not bad. It is fragile,” Temple Grandin, a prominent professor of animal science at Colorado State University, wrote in Forbes earlier this month.

“When a supply chain becomes more concentrated, there is greater loss of supply when a single plant is closed.”

Grandin wrote that the COVID-19 pandemic is going to be a wake-up call, adding that she expects many to become interested in more distributed local supply chains.

In Canada, von Massow also expects there will be discussions again about diversifying the country’s meat packing capacity so it isn’t as vulnerable to either border closures, strikes or another pandemic.

But it won’t be the first time such discussions have happened.

He said that when mad cow disease hit Canadian farms in the early 2000s, closing the U.S. border to live Canadian cattle for a time, there were efforts to build more processing capacity in Canada.

However, those plants have also disappeared to a significant degree, he said, partly due to the economies of scale. They weren’t big enough to compete in a North American or global marketplace, he said.

“I think it’s definitely something we should look at, but we also need to make a realistic assessment of what the risk is of another disruption of this scale,” said von Massow, referring to COVID-19.

“My guess would be that in the next months and years that we do things within packing plants that reduce the risk.“

That might include automation, which would reduce the density of people in such facilities.

The larger plants, which are capable of processing thousands of cattle per day, are important for many ranchers as well.

Bob Lowe has about 4,000 head of cattle waiting in pens at his feedlot located less than an hour’s drive from Calgary. Many are destined for Cargill’s meatpacking plant.

He said having more smaller plants might help the system deal with the current pandemic.

But Lowe, president of the Canadian Cattlemen’s Association, said Canada needs major processors to fill export quotas and keep costs down. A plant like Cargill’s at High River can handle up to 4,500 cattle per day.

“To go to a 400 or 500 or a 1,000 head-a-day plant would cost more money just because of the inefficiencies in it, which would mean that in the case of beef, the beef would be higher priced at the store and we would be getting less money at this end,” said Lowe.

“In the case of our international commitments, I’m guessing if I was a country, if I was in the U.K. and I wanted to import from Canada, I’d rather import from one or two people than from 300 different people.”

Back in Picture Butte, Munton and his staff of 25 people are as busy as ever, turning out meat for stores, restaurants and direct to customers.

He hopes that there will be more discussion about diversification of the meat processing sector, but he’s also glad that more people are thinking more about their food in general, these days.

“I think it goes back to the consumer knowing and wanting to know where things come from,” he said. SOURCE