‘There’s so much medicine that comes at springtime.’ A camp to connect Gitxsan families with their territory takes on a special role. 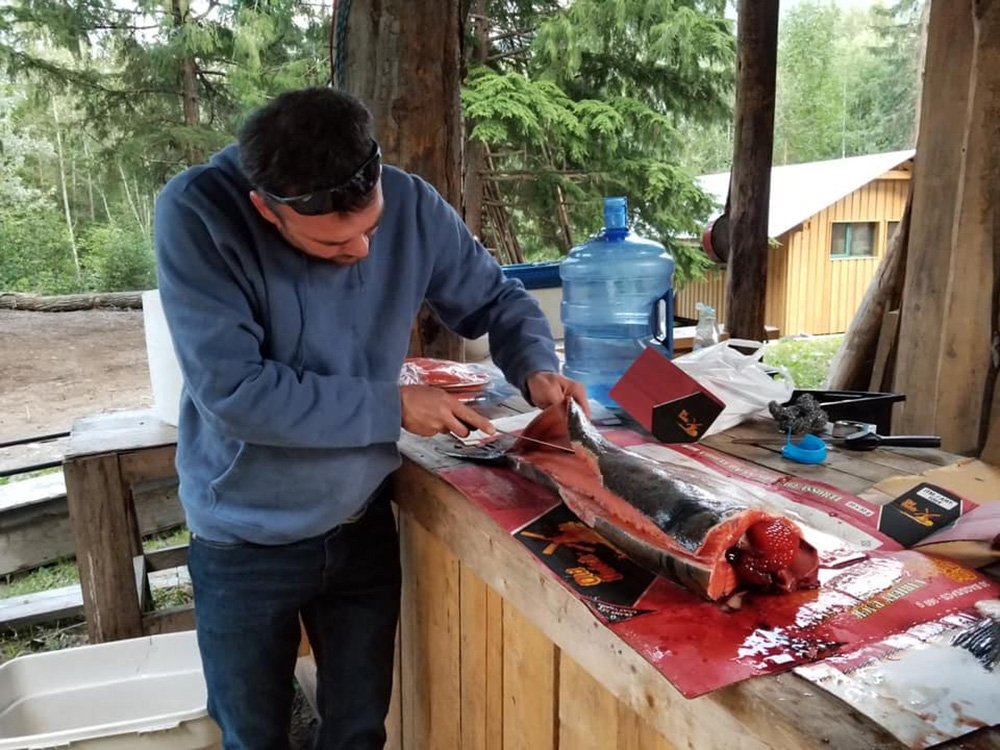 Richard Wright at the Madii Lii camp: ‘There’s always something to be harvested or processed. It just changes with the season.’ Photo via Facebook.

By early May, winter is sending its final frigid breaths up the Suskwa Valley in northwestern B.C.

Patches of ice and muddy pools linger on the rutted road. The Suskwa River runs fast and silty as it delivers meltwater from the Babine Mountains to the Bulkley River about 20 kilometres from its confluence with the Skeena.

Everything, save the valley’s prized conifers, is brown. Deciduous trees, which account for a small part of the valley’s forests, have not yet leafed out.

But at Madii Lii camp members of Wilp Luutkudziiwus, a house group of the Gitxsan First Nation, are already harvesting some of the land’s bounty.

The towering cottonwoods are beginning to release the sweet scent of spring and their gummy, fragrant buds are being turned into oils and salves said to have both antimicrobial and anti-inflammatory properties.

Juniper and cedar are harvested and simmered on the stove to purify the air.

“It’s both medicinal and spiritual,” says Richard Wright, whose Gitxsan name is Gapaygy’m Ganauu. “There’s always something to be harvested or processed. It just changes with the season. There’s so much medicine that comes right at the springtime.”

At a time when things like casual trips to the doctor’s office can’t be taken for granted, members of Wilp Luutkudziiwus are ramping up traditional cultural practices at the camp. Like other camps in the area, such as the Wet’suwet’en land occupations 150 kilometres to the south, Madii Lii’s purpose is twofold: block a pipeline proposed for their territory and bring house group members back to the land.

This year, the house group is putting greater emphasis on the skills and self-sufficiency that have sustained them for millennia.

“This pandemic helped us prioritize what we need to be focused on and working towards — less focus on battling the multi-levels of government and more effort in the well-being of Wilp members,” Wright says. “The pandemic has certainly put food security at the forefront of our minds.”

The camp’s cluster of buildings and the locked metal gate at Kilometre 15 of the Suskwa Forest Service Road, where it crosses a bridge over the river, have been here for six years.

But the Luutkudziiwus have been here much longer.

At the point where the road crosses into Madii Lii territory it also joins the Babine Trail, part of an ancient trade network that connected First Nations in the interior to those on the coast.

Traditionally, the trail was used for trade, travel and accessing trap lines and berry patches. It was here, in the Suskwa, that the Gitxsan would meet their Wet’suwet’en neighbours to form alliances and strategize against a common enemy.

In the 1800s, the Babine Trail from Hazelton to Babine Lake was upgraded by the provincial government to open access to mining and allow the shipment of goods to the interior. Pack trains of up to 100 animals would travel through the area and Indigenous guides were hired to carry staggering loads.

By the mid-20th century, the Great Depression had slowed prospecting and the fur trade. Many local families returned to the territories and the wildlife, berry patches and traditional skills that had sustained them in the past.

Traffic through Madii Lii territory dropped as motor vehicles and trains began to take travellers on other routes. Then, in the mid-1960s, the Suskwa Forest Service Road was built to facilitate resource extraction up the valley. The road leaves Highway 16 about 25 kilometres east of Hazelton and runs roughly 80 kilometres into the Babine Mountains.

The Gitxsan blockaded the road in the 1980s and 1990s to protest clearcut logging on the territory while their land claim was before the courts during the historic Delgamuukw trial. In 1997, the Supreme Court of Canada ruled in favour of the Gitxsan and Wet’suwet’en chiefs, affirming that the nations’ title to the land had never been extinguished.

For nearly two decades, things were relatively quiet. The valley is home to a handful of residences, most within a few kilometres of the highway. The river hosts four types of salmon and five types of trout, including the prized steelhead, which draw avid anglers from around the world.

Mountain goats, grizzly and deer also live in the valley, as well as moose that feast on the valley’s abundant balsam fir. Hemlock, pine and spruce are part of its ecological makeup and the Suskwa marks the eastern boundary for cedar, which comprise one per cent of the valley’s forests.

Logging continued. According to the BC Forest Service’s 2007 Atlas of Resource Values in the Gitxsan Watersheds, 27 per cent of the watershed is considered “operable” to the forest industry. Of that, 41 per cent, or 9,650 hectares, had been harvested by 2002.

Then came the pipeline, and the Luutkudziiwus decision to create a permanent camp on the territory.

In 2014, TC Energy — the company currently building the Coastal GasLink pipeline through Wet’suwet’en territory — proposed the 900-kilometre Prince Rupert Gas Transmission pipeline that would pass through Madii Lii territory on its way from Hudson’s Hope to a planned LNG processing plant at Lelu Island near Prince Rupert.

Wright was out patrolling when he discovered the company’s contractors surveying the territory. He asked them to leave.

Soon after, the gate went up.

Planning also began on the camp. That fall, a 1,000-square-foot bunkhouse with kitchen and meeting area was built next to the forestry road, just beyond the bridge over the Suskwa River. Since then, a second sleeping cabin, smokehouse, woodshed, two greenhouses and an open-air feast hall, which will eventually be enclosed, have been added.

Wright spends weeks out here at a time, making the half-hour trip from his home in Gitanmaax, 30 kilometres to the east.

Normally, things would be starting to build in the camp this time of year. Wild onion harvesting begins any day. Berry season kicks off shortly after, with soapberries in spring and blueberries and huckleberries closer to fall. Salmon would be brought from the house group’s fishing territory on the Skeena River and moose traded with coastal First Nations for oolichan — just as they have since before anyone can remember. Soon, the smokehouse would be running to preserve the food.

Deer, moose and goat are all hunted on the territory. When a family gets a moose, it is hung for several days before the women — aunties, grandmothers, mothers — arrive to butcher and distribute it.

Throughout the summer, the camp would normally host a rotation of families who come to help, learn the traditional practices and spend time on the land. On those days, Wright is busy cooking for the masses.

“It’s always just rockin’ and packed with house members, he says. “Now I think we’ve got to discourage the larger gatherings and the possible spread of this virus,” he says. “We’ve had to make some changes due to this COVID virus, not to have any crowds. So whatever’s going to happen will be on a really small scale.”

Plans for family, men’s and women’s land-based healing camps have had to be put on hold.

But that won’t stop the Luutkudziiwus from using the camp to teach Traditional Knowledge.

A rotating schedule for families using the camp is being planned and strict cleaning protocols implemented. There are also plans to make video and photo tutorials about harvesting foods and medicines as a way to transfer Traditional Knowledge while staying socially distant — an innovative mix of modern and traditional.

“Even if it’s just photos, step by step on how to make salve and oils and some of the traditional medicines and what they’re used for,” Wright says.

“We also have to focus on creating our own Indigenous economy as well.”

The Luutkudziiwus recently received a grant to buy their own equipment to mill lumber and fill custom orders as a way to create employment in the area.

Although the Luutkudziiwus have avoided the police actions that have made headlines on Wet’suwet’en territory to the south, the locked gate at Kilometre 15 has not gone unnoticed.

Shortly after it went up, the province tried to get through to replant an area that had been logged.

Wright declined. “I said no. You have not consulted with us. You have not even attempted to uphold your own legal obligation,” he says. “They were furious.”

A week later, free seedlings were being handed out in the community.

Hunters have also been “highly confrontational” about not being able to access the area and two military officers in camouflage fatigues once visited, driving up to the gate one morning and walking in, Wright said.

“I was just sitting on the porch having a coffee early in the morning,” Wright says. “I had to tell them that we don’t have a relationship with Canada, so if you want to start working on a relationship let’s get this meeting set up. Otherwise, we don’t recognize your authority and we can’t authorize you access to our lax yip (territory).”

While discussions with the province have proved unsuccessful, Wright says the house group has been making headway negotiating with the federal government. “We had to put a lot of money into legal expenses to get them to the table to negotiate with us,” he says, but the parties are now moving forward with terms of reference for negotiations.

The pipeline, which was approved in 2015, was shelved two years later when Petronas pulled out of the terminal near Prince Rupert. On its website, TC Energy says it continues to review its options for the pipeline.

Meanwhile, beyond the gate, life exists much as it has for thousands of years. The Suskwa River gurgles as it hits a small rapid next to Madii Lii camp. Warblers are returning to the valley and their songs join the chickadees that have overwintered here. Moose and deer venture onto the quiet roadways, leaving their tracks in the melting snow.

For Wright, who says he regularly preserves about 150 mason jars of salmon and moose each year, the pandemic won’t significantly change his summer. In any given year, he could easily subsist on a season’s harvest.

Instead, he’s putting his efforts into ensuring the rest of the community has what it needs.

“I’ll be out there working on our food security,” he says. “It’s a tough new world and we don’t know how long it’s going to last.”