Demonstrators stopped at the train tracks in the area of Waterloo and Pall Mall streets in London, Ont. on Feb. 28, 2020. . Sawyer Bogdan/980 CFPL

At least 80 people gathered in downtown London, Ont., on Friday afternoon as another show of solidarity with the Wet’suwet’en hereditary chiefs and their supporters, including protesters in Tyendinaga Mohawk Territory, near Belleville.

The Wet’suwet’en hereditary chiefs and their supporters are trying to stop construction of a massive natural gas pipeline through their traditional territory in British Columbia. Ontario Provincial Police arrested 10 people on Monday at a solidarity railway blockade in Tyendinaga, though new blockades were set up soon after.

The London event, dubbed ‘Emergency Action in Solidarity with Tyendinaga + Wet’suwet’en,’ was organized by Idle No More – London, Red Warriors, and Climate Justice London and began at 2 p.m. Friday in Victoria Park.

At roughly 2:30 p.m., they began marching north on Richmond Street before stopping at the train tracks south of Oxford Street. The march resumed soon after with protesters making their way to the tracks on Waterloo Street, near Pall Mall Street just after 3 p.m. Friday.

“We want Canada and Canadian citizens to be aware of the situation that happening and one of the ways to do that is to set up blockade at a rail station or a walking protest,” said Biinbigay Gizhig, who spoke at the rally.

London police issued a release soon after, asking motorists to avoid the area and to expect delays throughout the downtown.

“Members of the [London Police Service] Provincial Liaison Team are communicating with demonstrators, and open dialogue is continuous and ongoing,” the release stated.

“Our objective is to maintain the safe flow of traffic and, when delays occur, restore traffic flow in the safest manner possible in those areas.” 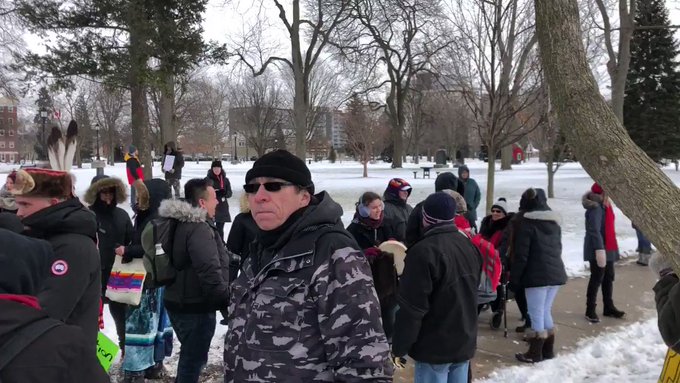 Demonstrators are still at the tracks on Waterloo Street north of Pall Mall Street. The crowd has started to thin but a larger number of people still remain @AM980News #Wetsuwetan 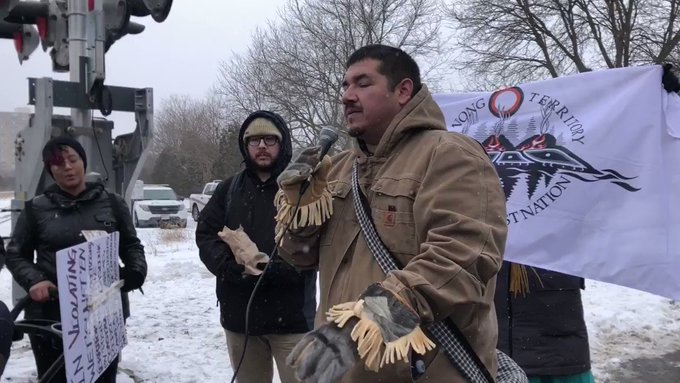 Around 5 p.m. Friday, demonstrators started to disperse, walking back to Victoria Park while a small group stayed behind to pack things up.

The gathering comes just over two weeks after over 100 protesters marched through downtown London in an initial showing of solidarity.

The hereditary chiefs and members of the Wet’suwet’en Nation who support them had been blocking construction on a section of the $6.6-billion Coastal GasLink project that runs through traditional Indigenous territory near Houston, B.C. before RCMP began enforcing an injunction in early February.

“We stand with them and we want the federal government to deal with them on a nation to nation relationship,” Gizhig said.

The 670-kilometre pipeline is being constructed elsewhere between northeastern B.C. and an LNG export facility in Kitimat on the coast, and has received consent from all 20 elected First Nation councils along the route.

But opponents argue that those councils only have authority over on-reserve matters, as artifacts of the colonial system under the Indian Act.

The Supreme Court of Canada has affirmed Indigenous rights and title over unceded land, territory that Wet’suwet’en opponents say only hereditary chiefs have authority over.

A B.C. Supreme Court injunction against the opponents was granted on Dec. 31 but enforcement was held to allow dialogue between all parties. However, talks broke off and arrests began in early February.

On Feb. 12, two Wet’suwet’en hereditary chiefs launched a constitutional challenge of fossil fuel projects, calling for the Federal Court to declare that Canada is constitutionally obliged to meet international climate change targets which they believe would cancel approvals for the Coastal GasLink project.

— with files from Global News’ Sean Boynton and Simon Little and The Canadian Press’s Michelle McQuigge.

With mass gatherings being paused to keep people safe amidst the spread of COVID-19, the Wet’suwet’en are adjusting their tactics, but calling on allies to keep standing with them. What can you do? Call out the largest funders of the CGL pipeline: JPMorgan Chase and Kohlberg Kravis Roberts & Co (KKR). These companies’ plans to invest in the pipeline aren’t final and there’s still time to stop them.

Sign this petition to KKR and JP Morgan Chase, and demand they stop funding Coastal GasLink. 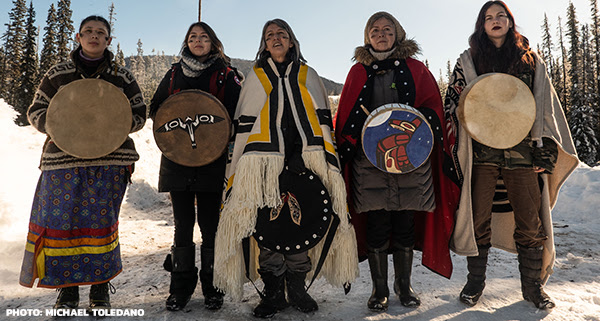 A powerful solidarity movement quickly sprang up across the globe and got the world’s attention. Indigenous people and allies have led railway blockades, port shutdowns, sit-ins at government buildings, and huge rallies that brought parts of Canada to an economic standstill. Meanwhile, global allies shut-down Canadian consulates and banks that are funding the pipeline. Now that we can’t gather in person, digital tactics are more important than ever.

So we’re taking the fight to the largest bankers and investors of the CGL pipeline — JPMorgan Chase and KKR.