The New York governor is replacing elected representatives with private, unaccountable monopolists, and lawmakers across the US are doing the same thing 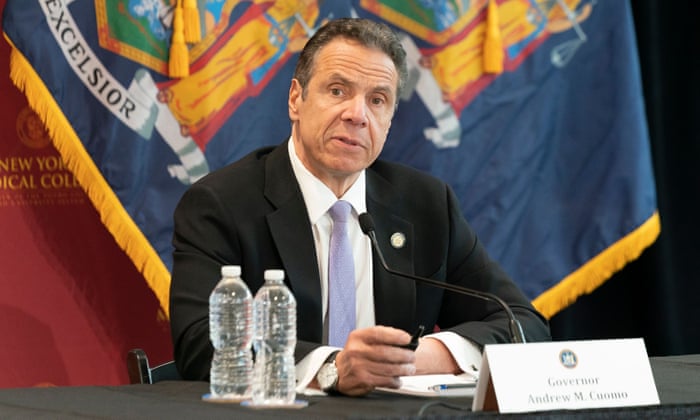 ‘Lawmakers are notably MIA in the middle of a pandemic – and by all accounts Cuomo likes it that way.’ Photograph: Lev Radin/Pacific Press/REX/Shutterstock

As Naomi Klein writes, the appointments of Schmidt and Gates represent a “Pandemic Shock Doctrine … that is being rushed into being as the bodies still pile up [and] treats our past weeks of physical isolation not as a painful necessity to save lives, but as a living laboratory for a permanent – and highly profitable – no-touch future”.

As she points out, the two billionaires have disastrous records in the precise areas of public policy they are charged with leading. The Gates Foundation was the driving force behind high-stakes testing regimes and the Common Core fiasco. And Schmidt’s vision of the future is Black Mirror with a bow on it: mass surveillance plus public investment in companies in which he has a stake.

Even if Schmidt and Gates had good policies, Cuomo’s knighting of them is offensive to American self-government. Nobody voted for them and they are accountable to no one. Cuomo, often accused of being too close to big campaign donors, is tripling down: he is simply allowing billionaires to plan our future directly, taking out the middlemen.

In case you had any doubt that this is a new form of government worming its way into our old democratic ways, Cuomo anointed these tsars at the exact same time that he took vast new powers away from the state legislature, which has not been holding regular legislative hearings since 1 April. Lawmakers are notably MIA in the middle of a pandemic – and by all accounts Cuomo likes it that way.

Turning away from locally-elected representatives, and towards billionaires with no accountability, represents a terrible erosion of democratic decision-making: Cuomo is quite literally replacing elected representatives with private, unaccountable monopolists. And too many other lawmakers across the US are doing the same thing.

From California to Florida, states are turning to big corporations, CEOs and trade associations to not only decide when and how these states should “reopen”, but also what the post-virus economy should look like. The various taskforces and panels states have convened to chart a way forward are populated by executives from Pepsi, Dell, Disney and other corporations.

Meanwhile, the Cares Act, Congress’ coronavirus rescue package, is an authoritarian, top-down, big business restructuring of the already monopolized American economy. It gives extraordinary powers to the treasury secretary to reshape manufacturing, retail and banking in America, with almost no oversight, via easy access to trillions of dollars from the Federal Reserve.

Too many decision-makers are ceding their policy to corporate power and private sector privilege.

Even before this pandemic, turning to big businesses and their wealthy owners was a common condition of policymaking

Even before this terrible pandemic, turning first to big businesses and their wealthy owners was a common condition of American policymaking. When federal lawmakers want to juice the economy, they pass tax cuts for big corporations and the wealthy. When state and city lawmakers want to promote economic development, they dole out giveaways to big companies, providing them a leg up over smaller, more local competitors, often without letting constituents know until the contracts have all been signed.

When those deals become well-publicized enough – like Amazon’s HQ2 deal with New York – local communities have shown they can fight back and stop them. These battles aren’t just about subsidies and inequality, they are about democracy: who governs us?

Deference to big business isn’t smart. The extremely concentrated, too-smart-to-fail medical industry failed; monopolization and bad trade policy, championed by the very men who now want to govern us, has led to mass death and suffering. The medical system couldn’t take the shock of the pandemic, thanks to outsourced supply chains and a rotting for-profit hospital system.

Coronavirus has created a constitutional crisis of sorts, one where the rules of representation, power and decision-making are up for grabs. As during the Great Depression, the fundamental facets of power – who has it, what constrains its use – are changing before our eyes. Monopolists are seizing power and market share for themselves, setting themselves up as the arbiters of our collective futures.

The pandemic has revealed just how far apart the incentives of big business and workers and community members are: big business wants to acquire power and profit. Owners get to stay at one of their many homes, sanitized, safe, while employees face terrible choices about the risks they create for their family members by going to work. The stock market is booming while low-wage, and disproportionately female and minority, employees get sick and die in the name of economic recovery.

It doesn’t have to be this way. We must build a post-pandemic economy that is not only more resilient to external shocks but also fairer for the workers who bear the brunt of downturns. That’s a lesson everyone – from the president to Andrew Cuomo to your local city council member – needs to learn, fast. SOURCE

Zephyr Teachout is an associate professor at Fordham Law School and the author of Break ’Em Up: Recovering Our Freedom from Big Ag, Big Tech, and Big Money

Pat Garofalo is director of state and local policy at the American Economic Liberties Project and the author of The Billionaire Boondoggle: How Our Politicians Let Corporations and Bigwigs Steal Our Money and Jobs

Naomi Klein: How big tech plans to profit from the pandemic