Four white strangers reportedly burst on the scene, beat an Indigenous man and stole and crashed a truck. 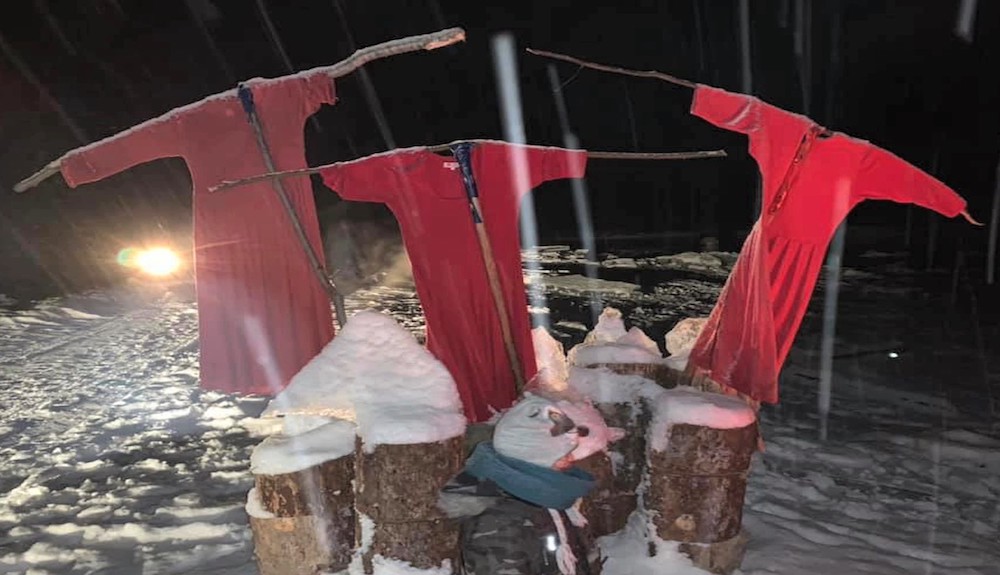 Red dresses hung at the entrance to the Tiny House Warriors encampment on unceded Secwepemc territory. Invaders tore down the dresses, according to the land defenders. Image from Tiny House Under Attack, a short documentary by Doreen Manuel.

n the edge of Blue River, a town of 157 people on unceded Secwepemc territory in eastern British Columbia, a handful of land defenders live in a cluster of five small houses. The group, who call themselves Tiny House Warriors, oppose plans to build nearby housing for hundreds of transient workers constructing the Trans Mountain pipeline expansion.

At the gateway to their encampment, the Tiny House Warriors erected a sign saying: “Man Camps Equals Violence against Indigenous Women.” They also hung red dresses to symbolize Indigenous women missing and murdered.

On April 19 at 10:45 p.m., three men and a woman drove two all-terrain vehicles into the encampment shouting profane slurs. They knocked down the sign, tore down the dresses, stole a truck and rammed it into a house, and punched and kicked an Indigenous man on the site, according to a video account.

The short documentary, titled Tiny House Under Attack, is produced and narrated by Doreen Manuel, director of the Bosa Centre for Film and Animation at Capilano University.

Her niece, Kanahus Manuel, whose people are Secwepemc and Ktunaxa, is one of the Tiny House Warriors.

Doreen Manuel’s narration says Kanahus was inside the house when the truck rammed into it with such force it jarred the structure off its foundation.

“They were yelling profanities and slurs at me. I believe it was a hate crime,” Kanahus told The Tyee in a phone interview. “They said ‘You were the one who shut down Canada.’”

In February of last year, Kanahus gave a speech at an Ottawa conference called PowerShift: Young and Rising, saying, “Native people could shut this whole country down.”

In late February and into March, Indigenous people and allies in support of the Wet’suwet’en land defenders blocked rail lines, creating a crisis for the federal government.

On April 20, Kanahus tweeted a cell phone video which she said captured some of the attack. On it, one of the men can be heard saying to her, “You’re racist and you’re on my land.”

“You’re f***kin’ white as f**k and trespassing on my land,” responds Kanahus, referring to Secwepemc territory. “Now get outta here.”

Clearwater RCMP are pursuing several charges, according to Sgt. Grant Simpson who spoke with The Tyee over the phone April 30.

“We’re treating it as a hate crime at this point,” Sgt. Simpson said. “But we have to consider some of the comments that [Kanahus] has made as well, right? Not just her… but we have to be very careful about how we examine this.”

The Tiny House Under Attack video includes a photo showing two of the men said to have taken part in the attack, and asks for help identifying them. One is shown kneeling on the collapsed sign.

RCMP have yet to identify the two men in the photo. They are “not known to us here,” said Sgt. Simpson, who said the RCMP had not shared their images on the internet or social media sites. “We’re still looking at that,” he said. “We’re trying to determine what direction to take with this.”

He said the police need, but had not received, more information from the Tiny House Warriors. “It’s difficult to pursue if the complainant is not going to be cooperative with us,” Sgt. Simpson said.

Kanahus Manuel’s lawyer Joe Killoran said he listened on the phone as Clearwater RCMP Cpl. Mark Labossiere took his client’s victim statement. Killoran said the officer “was pretty hostile,” treating Kanahus “more like a suspect than a victim.” For that reason, Killoran said, he cut off the interview.

In the short documentary, Kanahus charges the violence was “targeted” at the Tiny House Warriors for their opposition to oil and gas development, and was carried out by people who worked for the industry.

Kanahus told The Tyee she wants action by the RCMP, saying there have been other incidents of harassment, though none this dangerous. “This isn’t the first time something like this has happened,” she said. “What if my kids were here or there were elders in the house when this all happened?”

Amnesty International has sent a letter about the incident to Premier John Horgan and the RCMP, saying it “is very concerned about the violence, threats and property damage that occurred and more generally about the menacing nature of the attack.”

This Secwepemc safe zone has been in place since July 2018, Kanahus said, to signify the lack of consent given by the nation for the Trans Mountain pipeline expansion. The RCMP has not intervened.

Near the end of the documentary, Doreen Manuel says, “This Tiny House Warrior encampment is how these Indigenous women are answering the call to action… by reoccupying the land, growing gardens, and establishing this community to protect the land and life for future generations.” She connects these activities to the Calls to Action in the report by Canada’s Truth and Reconciliation Commission.

“There are weekly reports of Indigenous women going missing and being found murdered,” Doreen Manuel says in the video. “Indigenous people have endured a long, documented history of unfair treatment in Canada.”

Kanahus Manuel said the day after their encampment was terrorized, members could hear the sound of vehicles revving engines loudly nearby.

The night invasion of April 19 was foreshadowed by an earlier incident, according to Kanahus. She says she told the RCMP, “A white truck also came near and someone threw a wrench out the window while they were speeding around.”

So far, she noted, none of these acts of intimidation have led to a tragic death.

Weighing on everyone’s mind at the encampment, however, is the killing of Barbara Kentner, an Indigenous woman struck by a trailer hitch thrown from a vehicle in Thunder Bay, Ont. in 2017. Kentner’s sister has said she heard a white passenger in the car shout an expletive and yell, “I got one of them.”