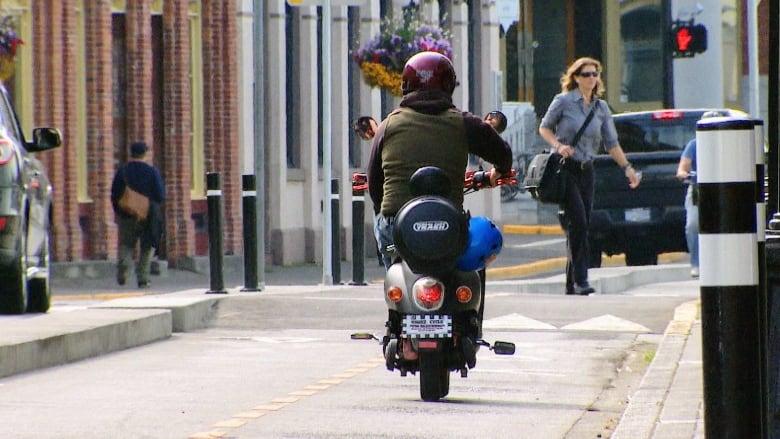 E-cyclists say they’re being unfairly ticketed by the RCMP for not having insurance on a type of e-bike that shouldn’t require it. (Michael McArthur/CBC)

People who ride and sell e-bikes that look like scooters say they’re dismayed by a recent decision in B.C. Supreme Court that ruled against a man who was fined for riding one without a licence or insurance.

Steve Miloshev, operator of distribution company Greenwit Technologies, says the e-bikes he sells are perfectly legal but are unfairly targeted because they look like motorcycles or mopeds.

In B.C., e-bikes are regulated as motor-assisted cycles. The bikes must have limited power and a maximum speed of 32 km/h. Also, they must be outfitted with pedals. The provincial insurer, ICBC, doesn’t offer coverage for them. A person must be 16 to ride them but doesn’t need a driver’s licence.

But recently a B.C. Supreme Court judge upheld fines against a man in Surrey who was riding a Motorino XMr, which Miloshev markets as an e-bike, without a licence or insurance. The judge said the Motorino “does not comply with the intent of the legislation.”

Justice Robert W. Jenkins said the Motorino is not a motor-assisted cycle because the pedals don’t propel the motor and the vehicle can operate without them. 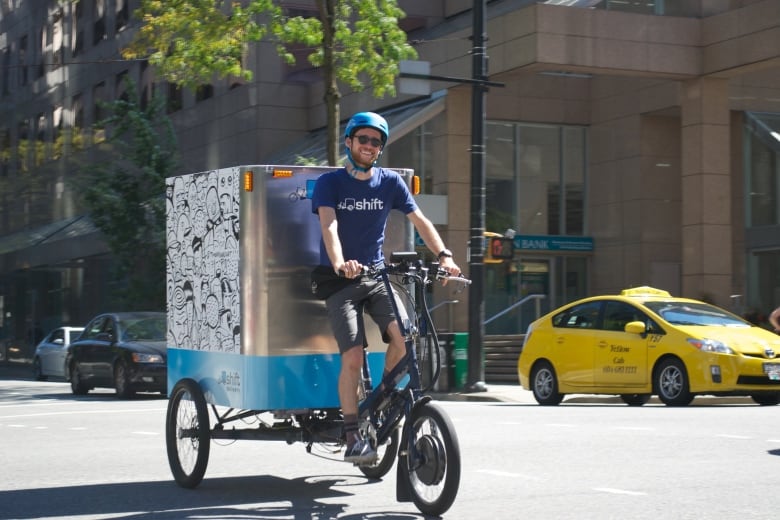 Steve Miloshev says electric cargo bikes like this take up more space in the bike lane than his e-bikes. (Shift Delivery)

Miloshev and other e-bike dealers in B.C. take issue with the judge’s interpretation. They say the law is clear, and bikes like the Motorino XMr fit within it.

Specifically, Miloshev thinks the judge misinterpreted the section of the motor-assisted cycle regulation that says the motor must stop if the operator stops pedaling, releases the accelerator, or applies a brake.

The defendant in the case testified that he had never used the pedals on his e-bike, so he didn’t know if the motor would disengage when he stopped pedaling. But Miloshev says that shouldn’t matter, because the bike fits the other criteria for the motor to stop.

Miloshev says the legislation for motor-assisted cycles has been in place in B.C. for 18 years and he didn’t notice any pushback on e-bikes like the Motorino until a couple of years ago.

He doesn’t think that other devices like motorized skateboards and push-scooters, which unlike e-bikes are currently illegal to operate on roads and sidewalks in B.C, get as much attention from law enforcement.

Miloshev says his Motorinos also take up a lot less room in the bike lane than some new cargo bikes.

Kelly Goldbeck, owner of KGeez Cycle in Victoria, says the fines are a shame because e-bikes like the Motorino XMr are great for the environment and work out well for commuters who don’t have a driver’s licence.

That’s the case for Terry Wojtkiw, a commercial painter who lives in Victoria. Wojtkiw lost his driver’s licence due to an impaired driving incident years ago, and uses a Motorino to get to work sites with all his gear in tow.

“It’s my transportation,” he said.

Wojtkiw said he was issued a ticket in 2018 for driving without a licence or insurance and driving along the side of the highway. He says a judge waived the fines, but the Crown has appealed the decision. He’s currently waiting for a trial date.

Andrea Guyon, another Victoria resident issued a fine for riding without a licence, also said she uses her Motorino to get to work.

“This is what people are doing to get around,” Guyon said. “It’s not the future, it’s now.”

Guyon says she enjoys going by the long line of cars stuck in traffic while she whizzes by in the bike lane, which e-bikes are allowed to do. She also notes that she often sees commuter cyclists blow past her because her Motorino is limited to 32 km/h.

The province is currently reviewing the Motor Vehicle Act to find ways to make way for new forms of transportation like e-scooters and electric skateboards. The province says it has invited communities to submit proposals for pilot projects.

But Miloshev says the law for e-bikes like the Motorino XMr are clear, and don’t need to be updated.

“There is a law that says that they’re legal,” he said.

@MaryseZeidlerMaryse Zeidler is a reporter for CBC News in Vancouver, covering news from across British Columbia. You can reach her at maryse.zeidler@cbc.ca.