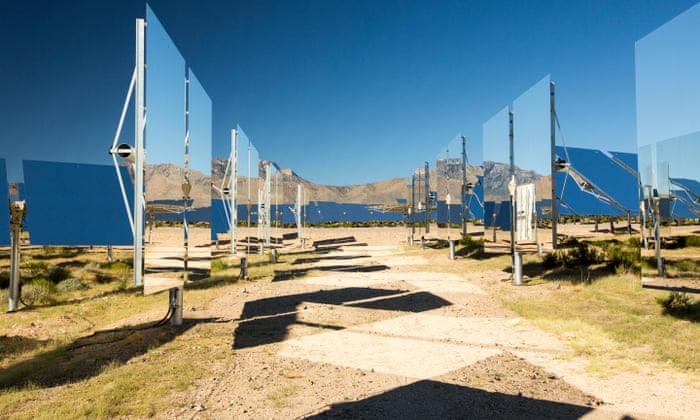 Heliostats at the Ivanpah solar thermal power plant in California’s Mojave Desert. ‘The film’s attacks on solar and wind power rely on a series of blatant falsehoods.’ Photograph: Alamy

Denial never dies; it just goes quiet and waits. Today, after years of irrelevance, the climate science deniers are triumphant. Long after their last, desperate claims had collapsed, when they had traction only on “alt-right” conspiracy sites, a hero of the left turns up and gives them more than they could have dreamed of.

Planet of the Humans, whose executive producer and chief promoter is Michael Moore, now has more than 6 million views on YouTube. The film does not deny climate science. But it promotes the discredited myths that deniers have used for years to justify their position. It claims that environmentalism is a self-seeking scam, doing immense harm to the living world while enriching a group of con artists. This has long been the most effective means by which denial – most of which has been funded by the fossil fuel industry – has been spread. Everyone hates a scammer.

And yes, there are scammers. There are real issues and real conflicts to be explored in seeking to prevent the collapse of our life support systems. But they are handled so clumsily and incoherently by this film that watching it is like seeing someone start a drunken brawl over a spilled pint, then lamping his friends when they try to restrain him. It stumbles so blindly into toxic issues that Moore, former champion of the underdog, unwittingly aligns himself with white supremacists and the extreme right.

Occasionally, the film lands a punch on the right nose. It is right to attack the burning of trees to make electricity. But when the film’s presenter and director, Jeff Gibbs, claims, “I found only one environmental leader willing to reject biomass and biofuels”, he can’t have been looking very far. Some people have been speaking out against them ever since they became a serious proposition (since 2004 in my case). Almost every environmental leader I know opposes the burning of fresh materials to generate power.

There are also some genuine and difficult problems with renewable energy, particularly the mining of the necessary materials. But the film’s attacks on solar and wind power rely on a series of blatant falsehoods. It claims that, in producing electricity from renewables, “You use more fossil fuels to do this than you’re getting benefit from it. You would have been better off just burning fossil fuels in the first place”. This is flat wrong. On average, a solar panel generates 26 units of solar energy for every unit of fossil energy required to build and install it. For wind turbines the ratio is 44 to one.

Planet of the Humans also claims that you can’t reduce fossil fuel use through renewable energy: coal is instead being replaced by gas. Well, in the third quarter of 2019, renewables in the UK generated more electricity than coal, oil and gas plants put together. As a result of the switch to renewables in this country, the amount of fossil fuel used for power generation has halved since 2010. By 2025, the government forecasts, roughly half our electricity will come from renewables, while gas burning will drop by a further 40%. To hammer home its point, the film shows footage of a “large terminal to import natural gas from the United States” that “Germany just built”. Germany has no such terminal. The footage was shot in Turkey.

There is also a real story to be told about the co-option and capture of some environmental groups by the industries they should hold to account. A remarkable number of large conservation organisations take money from fossil fuel companies. This is a disgrace. But rather than pinning the blame where it lies, Planet of the Humans concentrates its attacks on Bill McKibben, the co-founder of 350.org, who takes no money from any of his campaigning work. It’s an almost comic exercise in misdirection, but unfortunately it has horrible, real-world consequences, as McKibben now faces even more threats and attacks than he confronted before.

But this is by no means the worst of it. The film offers only one concrete solution to our predicament: the most toxic of all possible answers. “We really have got to start dealing with the issue of population … without seeing some sort of major die-off in population, there’s no turning back.”

Yes, population growth does contribute to the pressures on the natural world. But while the global population is rising by 1% a year, consumption, until the pandemic, was rising at a steady 3%. High consumption is concentrated in countries where population growth is low. Where population growth is highest, consumption tends to be extremely low. Almost all the growth in numbers is in poor countries largely inhabited by black and brown people. When wealthy people, such as Moore and Gibbs, point to this issue without the necessary caveats, they are saying, in effect, “it’s not Us consuming, it’s Them breeding.” It’s not hard to see why the far right loves this film.

We have been here many times before. Dozens of films have spread falsehoods about environmental activists and ripped into green technologies, while letting fossil fuels off the hook. But never before have these attacks come from a famous campaigner for social justice, rubbing our faces in the dirt. SOURCE

• George Monbiot is a Guardian columnist

One thought on “How did Michael Moore become a hero to climate deniers and the far right?”