Amidst the pandemic, a flawed negotiation approach quietly aims at assimilation, not reconciliation. 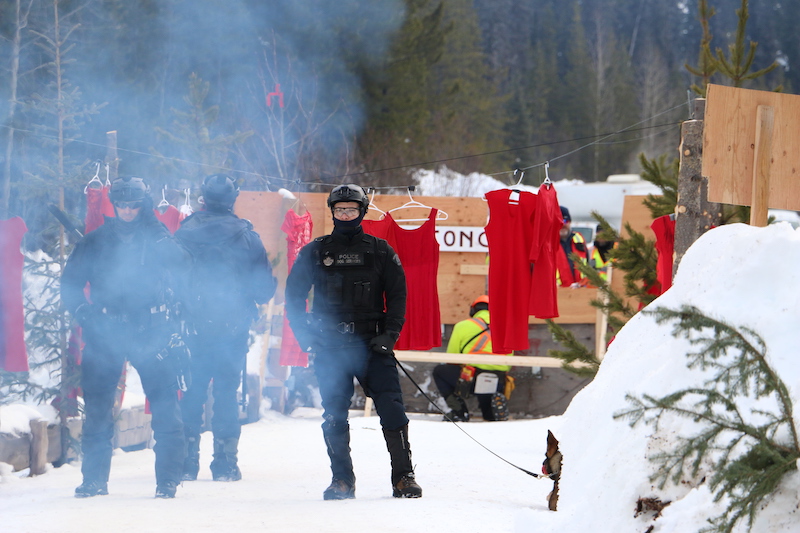 ‘When Trudeau allowed police to violently shut down the protests, it was clear he was offering us only one option: surrender to government dictates and compromise our rights through his termination negotiating tables.’ Photo by Amanda Follett Hosgood.

When measures to combat COVID-19 went into full effect in Canada, it was on the heels of cross-country protests in support of the Wet’suwet’en hereditary chiefs blocking a gas pipeline.

With economic activity grinding to a halt, one might have thought Indigenous peoples would be getting a breather from those kinds of pressures and attacks.

Instead the federal and provincial governments deemed resource extraction “essential,” meaning construction of several fiercely contested projects is moving ahead, including the Site C dam, the TransMountain expansion and the Coastal GasLink pipeline that provoked blockades through February.

Away from the public spotlight, another menace to First Nations is also being resurrected.

The Liberal government has quietly directed the federal bureaucracy to continue its negotiations with band councils — through Zoom online calls — over matters of lands and self-government.

The process means less scrutiny of these negotiations. And the Trudeau government’s aim is still to entrench resource companies’ access to our lands and resources on a permanent basis, while denying First Nations any meaningful say.

The Liberal government calls them “recognition and self-determination tables.” As of January, there are more than 80 ongoing negotiations involving some 390 First Nations, Métis and Inuit communities with a total population of more than 760,000 people.

The government boasts that the process is “jointly designed,” but in fact government negotiators have a veto over what gets forwarded to the federal and provincial cabinets for approval.

If First Nations accept the one-size-fits-all outcome, they will end up as ethnic municipalities, with their reserve lands converted into private property and their rights to the overwhelming bulk of their traditional territories extinguished in perpetuity. To date, nearly 30 preliminary-type agreements have already been signed. Considering the impact of these negotiations, they’d more accurately be called “termination tables.”

In early 2018 the Liberal government tried a similar manoeuvre, not through negotiations but through legislation. Prime Minister Justin Trudeau made a splash with his plans for reconciliation, promising to break with an ugly history of mistreatment and finally honour Indigenous rights.

But while the Liberals talked a big game in public, they kept details about the key aspects of the policies and legislation tightly under wraps.

That summer I launched a campaign to be elected the National Chief of the Assembly of First Nations. My main aim was to help drag this policy and legislative agenda into the harsh light of scrutiny.

As details dribbled out, it became clear the fine-sounding rhetoric disguised how this agenda would package our rights into a small legal box. The Liberals’ “inherent right to self-government policy,” which recognizes our rights in an abstract sense, actually contained pre-conditions that would convert First Nations into municipal, fourth-order governments without any significant powers.

And using the “Comprehensive Claims Policy,” the government would continue to require First Nations to extinguish their Aboriginal title in any treaty, despite it being recognized by the Supreme Court of Canada in decisions like Delgamuukw and Tsilhqot’in. Trudeau had promised we’d be freed of the shackles of the Indian Act, but this was more like moving us from a decrepit old jail to a new modernized prison, with the jailer holding onto our lands and resources.

Faced with a groundswell of opposition from First Nation leaders and activists through 2018, Crown-Indigenous Relations Minister Carolyn Bennett promised to back off this agenda.

But instead the federal government went underground with its plans. And now, under the cover of the pandemic, it’s pushing them in one-on-one talks with First Nations. The federal government has poured more than $100 million into the negotiations to sweeten the bitter outcome.

This is an old story, and I should know. I was a Liberal insider once, serving as vice-president of policy on the party’s Aboriginal Commission in the early 1990s. I saw how Aboriginal rights were embraced rhetorically by Jean Chrétien, and then, systematically betrayed while the federal bureaucracy maintained an agenda bent on denial and dispossession.

That agenda was a continuation of the 1969 White Paper of then-prime minister Pierre Elliott Trudeau, which adopted the equality language of the civil rights movement but was intended to strip us of our treaties, nullify our legal and political status as collective rights holders and assimilate us into Canadian society.

Indigenous resistance defeated it, only for the bureaucracy to set out to implement it piecemeal, quietly, over the long-term of the past 50 years. Today Justin Trudeau is pushing a White Paper 2.0, which has too many of the markings of his father’s.

Every generation of Indigenous activists is confronted by this Liberal approach: unwanted policies are clothed in the new rhetoric of the day, then defeated, then they rise yet again, like colonial zombies that will not die.

When the country was swept by Indigenous protests this February, with thousands of young non-Indigenous people lending their voices and bodies in solidarity, Trudeau could have finally chosen another way. But when he allowed police to violently shut down the protests, it was clear he was offering us only one option: surrender to government dictates and compromise our rights through his termination negotiating tables, ensuring that reckless resource extraction could proceed unhindered.

Indeed, for all the clamour about the tentative deal the federal Liberal and provincial BC NDP governments offered the Wet’suwet’en hereditary chiefs, all signs indicate that the model corresponds with what they are pushing on all other First Nations.

The alternative has long been understood. Documented by reports like the 1996 Royal Commission on Aboriginal Peoples, it is for a new deal for Indigenous peoples: the recognition of Aboriginal rights and title; the restoration of a land base, with restitution where lands cannot be returned; and genuine nation-to-nation relations. It would offer First Nations justice, and provide sane environmental policies for the rest of the country.

The zombie-like policies of the federal government will continue plaguing us until a real agenda of Indigenous self-determination kills them off for good.

Russ Diabo is a Mohawk policy analyst and regular commentator on CBC, CTV and APTN. In 2018 he ran for the position of National Chief of the Assembly of First Nations.