Women leaders are a symptom of a political system’s success, not necessarily its cause. 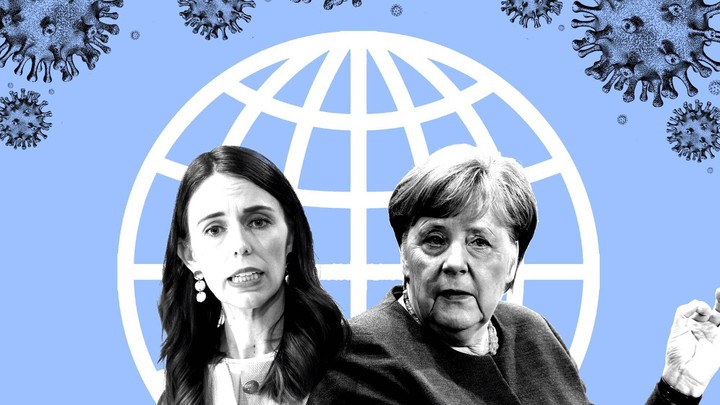 Choose your coronavirus fighter: Will it be Germany’s Angela Merkel and her calm explanation of the COVID-19 infection rate? Scotland’s Nicola Sturgeon and her government’s helpful, nuanced strategy documents? Or New Zealand’s Jacinda Ardern, with her empathetic Facebook Live addresses and decision to lock down the country early?

All a bit mainstream for you, huh. How about Iceland’s Katrín Jakobsdóttir, who has offered free coronavirus testing to all the country’s citizens? Or Norway’s Erna Solberg, who held a press conference just for children, telling them it was okay to feel scared?

Looking through this list, it’s tempting to reach the conclusion that women must be better at dealing with this crisis because of their gender. A similar narrative followed the 2008 financial crash. A world ruled by women was held up as a gentler, less aggressive one: If only Lehman Brothers had been Lehman Sisters, the crash would not have happened. This time around, commentators are again praising the “empathy and care” of female leaders. “It’s like their arms are coming out of their videos to hold you close in a heart-felt and loving embrace,” Avivah Wittenberg-Cox of Forbes argued.

Read: New Zealand’s prime minister may be the most effective leader on the planet

This line of reasoning, however, is flawed—and potentially dangerous to women’s progress in politics. It’s not that women leaders are doing better. It’s just that strongmen are doing worse.
Let’s start with the obvious example: Donald Trump. Over the past few weeks, the American president has discovered that much of his political playbook is useless against a respiratory illness. Unlike the press, the coronavirus cannot be browbeaten. Unlike whistleblowing officials, it cannot be fired or demoted. The virus does not care if you imply that it is unpatriotic. It is not diverted by untested cures, or dangerous ones you just invented. It does not read Twitter.

Strongmen prosper as leaders because they promise certainty in uncertain times. They offer a simple enemy and present themselves as the only champion against it. The more control they have—by delegitimizing opposition leaders and the press—the better this strategy works. But this virus can’t be delegitimized. People will keep on coughing and dying, regardless of what Trump tweets about the virus.

Xi Jinping discovered this problem early in the outbreak, when the Chinese state tried to suppress doctors’ concerns about the new disease emerging in Wuhan. The disease went on spreading anyway. Iran appears to be desperately downplaying the extent of infections. Brazil’s Jair Bolsonaro dismissed the coronavirus as “a little flu or a bit of a cold” and attended an anti-lockdown protest in April. By that point, his own press secretary had already caught the disease. The Amazon’s biggest city, Manaus, is now being forced to dig trenches to accommodate the dead, and Brazil’s official death toll has surpassed that of China. (Around the world, the true cost of the virus will take months, or even years, to emerge. Both authoritarian and liberal countries might be hampered by poor record-keeping and a lack of resources for recording deaths, while the former are also likely to have a weak media which is unable to interrogate official death tolls.)

Really, this is an argument about leadership styles, which brings us back to the question of gender. Judging “women leaders” as a group is a fraught task, when they are still such a minority. Whenever Merkel has attended a G20 meeting during her 14 years as chancellor of Germany, she has rarely faced a line for the ladies’ toilet. She is currently the only woman leading one of the world’s 20 largest economies. If physical meetings were happening right now, she would be fighting only with European Commission President Ursula von der Leyen for a spot at the hand dryer.

So any talk of “women leaders” suffers from a small sample size. In modern times, China has never had one; neither has Russia, Saudi Arabia, Italy—or the United States. At the start of the year, only 15 of the 193 United Nations countries were led by women, according to Axios, and that has now dropped to 13. That means female leaders are inevitably compared with one another, and with their rare female predecessors, even when it’s not appropriate. Britain’s former Conservative prime minister Theresa May was branded the Iron Lady 2.0—a second Margaret Thatcher—even though it quickly became apparent that, in her work ethic and communication problems, she was much more like Labour’s Gordon Brown.

The same unilluminating comparisons are happening now. Merkel’s nickname might be “Mutti,” but she’s a disciplinarian mom, not a touchy-feely one. Her leadership style is more influenced by her scientific background than by her second X chromosome. (Although, of course, how she is perceived and treated is definitely influenced by her gender.) The way Merkel governs is unlike Ardern—who, in turn, is more like Canada’s Justin Trudeau than like any other female leader. Both Ardern and Trudeau sell themselves heavily on their social and environmental awareness and ability to communicate sensitively with minority groups, and both have faced accusations of self-regarding piety as a result.

So what can we say about women leaders? Again, it’s hard to draw conclusions from general research, because the kind of person who becomes a senior politician is, by definition, unusual. He or she needs talent, ambition, drive—and favorable life circumstances. In countries that are unused to female leadership, any woman who succeeds is likely to be exceptionally tough and determined to rise up the ranks.

One finding that might have a bearing on this debate, though, is that women, even women in leadership roles, appear to be more risk-averse than men. The research on that is far from settled, but society certainly thinks that women are more risk-averse, and so female leaders find it easier to champion and communicate cautious policies such as school closures or mandatory mask-wearing. Being macho, however, is a liability. On March 3, British Prime Minister Boris Johnson boasted that, “I was at a hospital where there were a few coronavirus patients and I shook hands with everybody.” Weeks later, he was in intensive care.

What about the argument that nurturing and nannying are what people need now? We should be wary of the superficially appealing argument that women leaders are better because they are “empathetic.” That’s an essentialist view of gender—men are X, women are Y—and one that has tended, historically, to hold women back. Just think of the Victorians who argued that women were the “angel in the house”—delicate, sensitive, beautiful creatures who were too saintly to trouble themselves with the nasty business of earning a living, going to university, or having the vote. This argument also ignores the fact that many successful male leaders have been praised for their empathy: People skills are an asset in a functional democracy, where winning votes matters.

The final potential explanation for why countries with female leaders appear to have done better in this crisis is the most thought-provoking. Women find gaining power easier in “a political culture in which there’s a relative support and trust in the government,” Kathleen Gerson, a sociology professor at NYU, told The Guardian. A country that elects a strongman—or where a strongman can hold on to power, once elections become a sham—is an already troubled country.

So let’s not flip the old sexist script. After centuries of dogma that men are naturally better suited to leadership, the opposite is not suddenly true. Women leaders aren’t the cause of better government. They are a symptom of it.

HELEN LEWIS is a London-based staff writer at The Atlantic and the author of Difficult Women:  A History of Feminism in 11 Fights.