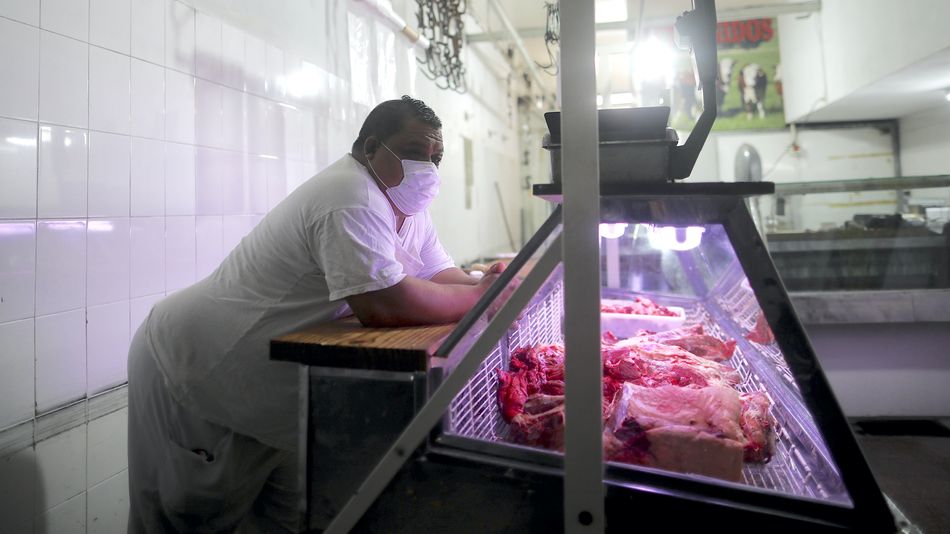 A worker at an empty meat counter in Buenos Aires. Even in beef-loving Argentina, butchers say sales have dropped 50 percent during the pandemic.

Picture two industries. One is increasingly associated in the consumer’s mind with dirt and disease. Not only is much of its product pumped full of antibiotics and covered in fecal matter, not only does it come with an elevated risk of cardiovascular disease and cancer, but now its workers are testing positive for coronavirus in droves, and its supply chain is in pain.

The other industry makes a product that many consumers find just as tasty as the first industry’s product, but without the health risks. Even in the midst of a global pandemic, this industry is having no trouble sourcing its ingredients or forcing people to work. Its sales growth is eye-popping. Its stock is soaring. Its investors can’t open lines of credit fast enough.

Which one do you think is going to thrive in a post-COVID-19 world?

The first industry, of course, is traditional meat production. If you haven’t seen the news (around 5,000 meat and poultry workers have tested positive for coronavirus through April, according to the CDC, including 60 percent of workers at one Tyson plant) then you might have seen meat rationing at your supermarket. Even Costco is considering it.

Four plants have closed. Pork production is down 25 percent, says the United Food and Commercial Workers International Union; beef is down 10 percent. “The supply chain is breaking,” Tyson warned in a full-page newspaper ad. For meat eaters (full disclosure: that includes me), this means higher prices are on the way. Meanwhile, the DOJ is being urged by states to look into meat industry price-fixing.

You’d be forgiven for asking if your meat habit — already, likely the biggest contribution you make to climate change — is worth it.

Luckily, the second industry’s product is more widely available than ever, its supply chain having expanded at just the right time. To companies that are clearly doing well out of the pandemic, like Zoom and Amazon, you can add the two new leading lights of plant-based meat: Beyond Meat and Impossible Foods.

Beyond reported its first quarter results Tuesday, and they included something startups don’t often see: an accidental profit. The company made nearly $2 million pure profit in the first quarter, compared to a $6.6 million loss in the same period last year. Total sales shot up from $40 million to $97 million. Beyond Meat shares jumped nearly 20 percent Wednesday. And that’s before Beyond’s deal with Starbucks, which has started selling Beyond sausage in 4,200 stores in China, kicked in.

“This is the industry’s moment,” Beyond founder Ethan Brown told Yahoo News, while being careful to express all the usual regrets about the pandemic.

Until recently, Beyond had one pandemic-ready advantage over rival Impossible: It was more widely available in supermarkets (around 2,700 of them), whereas Impossible burgers tend to be more available in restaurants (around 17,000 of them, including 1,700 Burger Kings). But Impossible Foods has been ramping up its grocery availability just in time.

Late last year, $10 bricks of Impossible beef were only available in a handful of chains in Southern California. In April, as the coronavirus crisis descended, Impossible — which is still a private company — announced a tentative rollout in 777 more grocery stores. On Tuesday, it added all 1,700 Kroger stores across the U.S. Impossible sales hit a new high in April, the company says, despite the closure or scaling back of its main customer, the restaurant industry. Just in time for a jump in home cooking, Impossible has released its own cookbook.

It’s time to shake up your recipe game. All of our #ImpossibleFam-favorites are now in one place and coming to a kitchen near you! Introducing Impossible™: The Cookbook. We’re donating $3 to @NoKidHungry for every book sold on Amazon this year. What will you chef up? #LinkInBio #CookImpossible

“We’ve seen surging sales through food delivery services,” Impossible founder and food scientist Pat Brown told Reuters. One of those services is a wholesale company called Cheetah, which normally sells to restaurants and hotels but just launched an app so regular customers in the Bay Area can make bulk orders for pickup. Since it started offering $33 cases containing eight frozen 1/3-pound Impossible patties on April 21, a spokesperson told me, 13 percent of all Cheetah orders included at least one case — and the company sold a third more Impossible patties than regular 1/3-pound beef patties. (Admittedly, the Bay Area is slightly more pro-plant-based meat than most of America.)

All of which is not to say plant-based meats are going to overtake real meat in sales any time soon. Worldwide, meat is a $1.7 trillion business. Prior to COVID-19, analysts believed alternative meat could capture about 10 percent of that within a decade. If the pandemic and its associated problems can grow the customer base to double the estimate, that still leaves meat production companies with more than $1 trillion of annual revenue to play with.

But trends like this, once started, are hard to arrest. The coronavirus pandemic was a test for two industries. The one that uses food science and plant ingredients to replicate meat taste passed with flying colors. Supply kept up with demand. Both Beyond and Impossible have opened new billion-dollar lines of credit to fund further expansion. Impossible’s next target is replicating pork, which is the world’s most popular meat outside the U.S. And that’s all before lab-grown meat enters the scene.

The meat industry, meanwhile, is failing the test. Its supply chain is brittle. Its product is ethically and environmentally compromised. You don’t have to see the horrors of the slaughterhouse to get a sense of just how wrong it all is; you don’t have to read up on all the antibiotics they pump into pigs. Just stand somewhere miles downwind of a major hog farm or cattle ranch and breath in. It’s a messy, nasty, murderous business. If a meat tycoon could sell the same product, made far cheaper in the long run, using plants and a little science, why wouldn’t they?

By the next century, at least, chances are you can stick a fork in the meat business. It may not be done quite yet, but it is certainly bloodied.