Close to 3,000 health-care workers have tested positive for coronavirus 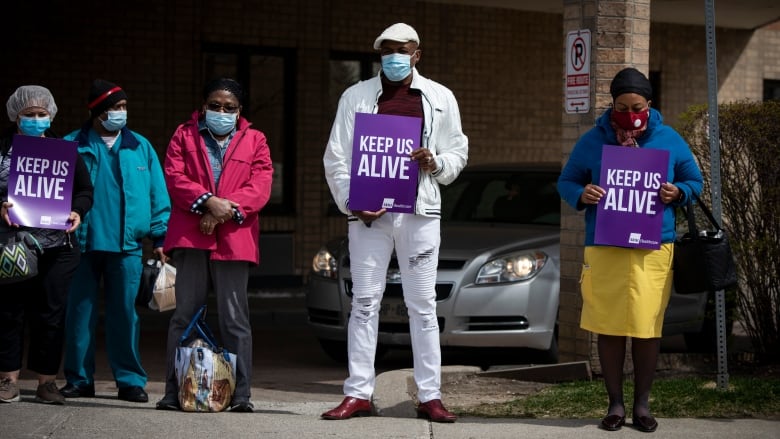 Long-term care home workers take part in a moment of silence and rally in front of Midland Gardens Care Community in Toronto on Tuesday. A union representing thousands of healthcare workers is calling for a public inquiry into deaths at homes across the province. (Evan Mitsui/CBC)

A union representing thousands of Ontario health-care workers is calling on the province and local police forces to launch a public inquiry and criminal investigations into long-term care deaths tied to COVID-19.

Announced on Tuesday, the push appears to be the first major call for a public inquiry in the country, as the new coronavirus continues to spread through hundreds of long-term care homes.

In Ontario alone, more than 1,000 residents and several front-line staff members have died amid more than 200 outbreaks at such homes.

“A commission is urgently required because until we have a vaccine, or at a minimum, treatment available for the entire population, we must prepare now for consecutive spikes or waves of COVID-19,” said Sharleen Stewart, president of SEIU Healthcare, in a statement.

The union is calling for:

‘We’re pulling out all stops’

Asked about the request for an inquiry, Premier Doug Ford reiterated that his government is doing “everything” in its power to help long-term care homes: “We’re pulling out all stops on this.”

Health Minister Christine Elliott added the province is focusing all of its efforts on supporting those homes, and both officials noted a number of steps the government has taken, such as banning most visitors and bringing in outside workers to assist, including members of the military.

“We will continue to take those steps until these outbreaks are under control,” Elliott said.

So far, close to 3,000 health-care workers at various facilities, including long-term homes and hospitals, have tested positive for the coronavirus. Those workers make up nearly 16 per cent of all cases in Ontario.

On Tuesday, SEIU Healthcare held a memorial and rally outside Midland Gardens Care Community in Scarborough — where so far, no deaths have been reported — in honour of personal support workers who have died after working in long-term care.

“Both frontline workers and the elderly in our long-term care system are saying the same thing: keep us alive,” said Stewart.

“That’s why we’re calling for urgent investigations that will keep people alive and hold negligent operators responsible for the death of our health-care heroes.”

Ontario’s long-term care sector was the subject of recent inquiry into their safety and security; tied to the crimes of serial killer and former nurse Elizabeth Wettlaufer.

That inquiry wrapped in 2019. A final report made 91 recommendations, with several tied to increasing funding and staffing for facilities across the province given their “systemic vulnerabilities.”

One key recommendation called on the Ministry of Long-Term Care to conduct a study to determine adequate staffing levels on day, evening and night shifts — and report back on that study by July 31, 2020.

As of February, the province had completed 18 of the recommendations, including several tied to medication safety, though critics at the time warned many important recommendations were not yet implemented.

“I’m looking forward to seeing not only what comes out of further work on that, but widespread system improvements … some of that may come out of post-COVID,” Samantha Peck, executive director of advocacy group Family Councils Ontario, told CBC News.

Inquiry ‘too early,’ some warn

As for the latest call for an inquiry, Peck said it’s still “too early,” given what families relying on the long-term care system are going through right now.

“I don’t think our focus should be on launching a public inquiry while we’re in the middle of fighting the fire,” he said.

However, with 20 per cent of the province’s care homes battling COVID-19 outbreaks, he stressed that people across Ontario — including residents’ families and healthcare workers — are looking for answers.

“We do need to understand why things happened the way they did, and if there are things we could have done to stem the level of death,” Sinha said.

WATCH | How to stay safe during the pandemic:

Infection control expert Dr. Susy Hota breaks down what we need to know to protect ourselves amid the coronavirus outbreak — from taking public transit to cleaning in the kitchen. 6:36

Lauren Pelley is a CBC reporter based in Toronto. Currently covering COVID-19, previously covered Toronto city hall and municipal affairs. Part of the team behind CBC Toronto’s international win for multimedia at the 2019 Edward R. Murrow Awards. Contact her at: lauren.pelley@cbc.ca