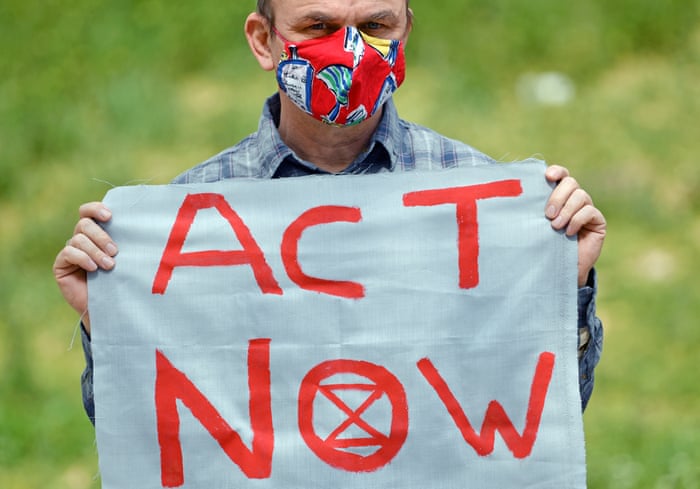 A participant at the Fridays for Future rally in Halle, Germany, last month. Photograph: Hendrik Schmidt/DPA-Zentralbild

A few weeks ago, the 30-year-old journalist wasn’t feeling so confrontational. Less was known about the global pandemic; the data and scientific research showing how the two global crises are linked was not as clear is it is today. But the connections quickly became obvious to Atkin, founder of the climate newsletter and podcast Heated. “Both are global crises which threaten millions of lives with clear science on how to solve them which governments have been too slow to act on; the same people who promote climate denial are refusing to accept the science of coronavirus, too.

“Coronavirus makes climate change worse, and vice versa,” Atkin says from isolation in her apartment. “We can’t do our research on climate because of it, we’ve had to cancel the UN climate summit for international negotiations.” Meanwhile, Donald Trump has loosened existing emission regulations during the pandemic, yet studies are already finding that death rates are “significantly higher” in areas with worse air pollution levels. The destruction of biodiversity makes pandemics more likely. And just like with the impact of global heating, , the coronavirus is hitting black, brown and poor people the worst.

The two things are so connected, Atkin repeats, that it’s stupid to say they’re not.

Raised in New York and based in Washington DC, Atkin started reporting on the climate in 2013 after graduating in journalism from SUNY (the State University of New York) but three years in she was burnt out. “I was forced to write in this really straight way with no emotion, just fact,” she says of her time spent at the now closed liberal news site ThinkProgress and then a more conservative TV network. “We ran stories which focused on ‘balance’ in a bid not to alienate audiences.” When facts were presented, it was to be done without emotion: the science shows we’ll kill people if we don’t do anything, we’re not doing anything, end report.

Climate-change deniers were also being given airtime on TV segments she was producing. She recalls being asked to rerecord a voiceover because she sounded “too judgmental” when stating what had been said by an interviewee wasn’t scientifically correct. And, with editors regularly giving science and opinion equal value, all too often Atkin felt she was doing a disservice to her beat.

“I thought back to my journalism classes and how we were taught the first rule in the Society of Professional Journalists’ code of ethics is to seek truth and report it.” Atkin came to the realisation that when it comes to the climate crisis, showing what is true requires more than facts alone.

“The truth is full of emotions, money and power,” she says. “It’s about people dying while others profit, the impact on lives and culture and jobs.” Atkin had told the climate story again and again but felt she was making little impact. “It seemed so irresponsible for me to be working as a journalist… without being explicit about what will happen if we don’t lower carbon emissions, and fast.”

And so in September last year she left her reporting job at New Republic and launched Heated: a climate-focused newsletter which aimed at speaking directly to an ever-growing, but under-served, environmentally-conscious audience. Atkin quickly found launching her own platform didn’t just offer her editorial freedom, but her more emotive and in-depth output was giving her subscribers more confidence to talk all things climate in their daily lives.

“I’ve had so many emails from readers telling me how before Heated the idea of speaking abut climate change to friends, family and colleagues made them anxious,” says Atkin. “Social science shows the best thing we can do as individuals on climate change is to speak about it, but it’s so controversial in the US that many people felt if difficult questions were asked they wouldn’t be prepared.”

Her paying subscribers have an expectation of regularly delivered content, and when the pandemic worsened she was struggling to write about the relationship between coronavirus and the climate crisis in a coherent and digestible way. “If I do a podcast, I thought, I could work it out as we go along by talking to really smart people,” she says. The moment matched the medium, and the Heated podcast was quickly launched.

She has interviewed the veteran US environmentalist Bill McKibben, Harvard’s interim director of the Center for Climate, Health, and the Global Environment Dr Aaron Bernstein, and a host of her fellow climate journalists. Her response to Planet of the Humans, Michael Moore’s controversial climate documentary (“a bad faith insult to all the work climate and energy scholars, journalists and activists have done in the last ten years”) makes compelling listening.

The first episode, however, opens with Atkin offering her own realisation: that living through the coronavirus has changed her thinking on whether individual action on climate, rather than only big business, politicians and the world’s most powerful, has a significant role to play.

“Every day now I take an individual action to help protect people: staying at home, wearing a mask, sanitising my hands, avoiding my friends and family,” says Atkin. “And that’s not just to protect people physically, but to show everyone around me that I care about this problem too.”

Seeing how quickly most of us have adapted our lives to respond to the Covid-19 crisis and encouraged our peers to follow has been a lesson in the potential of virtue-signalling. Public pressure on governments has forced swifter action, and communities have proven that they’re willing to make major changes both to help themselves but also for a greater good. Maybe, thinks Atkin, the “we’re all in it together” attitude could help to progress the climate cause too.

That’s not to say that diving head first into the corona–climate crossover has necessarily made her more confident about the future. When the newsletter started there was momentum behind a Green New Deal, a host of candidates with different climate policies fighting it out in the democratic primary, and climate change forums being broadcast on network TV.

“Focus has always been climate change’s number one problem,” says Atkin. “Journalists aren’t willing to cover it properly, people don’t want to to talk about, politicians with vested interests can’t be bothered.” It’s a crisis in prioritisation, and the coronavirus has certainly sapped momentum from the movement.

The relative speed at which states have moved on the coronavirus compared to inaction on the long-running climate catastrophe front has also confirmed one of Atkin’s greatest fears: that we live in societies so focused on the short-term that we wait to see the worst happening with our own eyes before we act on it. She isn’t optimistic about that changing any time soon, so that’s where Heated fits into her thinking.

”I see my responsibility as documenting the short-term effects of climate change more aggressively so people understand, just like coronavirus, climate change is killing people right now,” she says. Some, Atkin says, might think this make her an activist. “But I think it simply makes me someone who cares about human life, which is a basic tenet of journalism.”

Far from being irresponsible to talk about the climate during the coronavirus crisis, as Atkin puts it: it’s irresponsible not to. SOURCE