Canada’s corporate bailouts need to cut out tax dodgers and profiteers, and show long-term commitments are attached to the money.

The great recession of 2008 was an expensive lesson for governments around the world. Specifically, why providing large corporate and banking industry bailouts with little to no enforced conditions is a terrible idea. Massive loans and grants were used too often to rack up profit, pad executive pay, buy back shares to further inflate profit margins, and shell out even larger dividends to shareholders. Adding insult to injury, some of these corporations then moved their operations offshore, taking much needed jobs with them and extending one of the most detrimental impacts of the recession: the loss of full-time well-paying work. Since then, we’ve discovered the wide use of tax havens. It begs the question of how many of corporations we were bailing out were partaking in such schemes to avoid having their publicly funded profit taxed.

The coronavirus crisis has pushed many businesses and corporations to the edge and government assistance to protect jobs is needed, but the learnings of the great recession should make us smarter this time around.

We need to focus our spending on workers, their livelihoods and our collective goals as a society. Strict conditions should be placed on large loans or other significant financial support going out the door to big corporations.

You can’t be a tax cheat

It’s pretty simple. If you are using tax havens and other schemes to avoid paying Canadian taxes, you’re out, even if some of those schemes are legal. According to Canadians for Tax Fairness, the federal government loses at least $8 billion yearly to the use of tax havens. While we likely can’t solve the complicated mess of international tax avoidance in the middle of a pandemic, we can send a strong message – we’ll support you when you pay your fair share. If you are using a tax haven for your head office, or if you are storing profit in offshore accounts, it’s time to stop.

You can’t use our money to get richer

Any large capital bailout that isn’t a short-term loan should come with an equity-stake in the company. If we are covering your debt and risk, then we should also get a share of profits (should they return) and the ability to influence corporate decisions in the future.

Companies need to commit to maintaining jobs, and further conditions should be created to ensure they are decent jobs, with livable wages and adequate paid sick days. We could go a step further, casting our eyes down the road to recognize that Canada’s long-term success relies on greening every part of our economy, and require commitments to environmental improvements.

For years following the 2008 financial crisis, murky details emerged about the bailout packages given to banks and corporations, opening up questions that should have been addressed at the time. Too often, the public found out after the fact that there were too few conditions to ensure public benefit or halt profiteering. This time, we want transparency up front. That includes disclosure of the conditions of the bailout and proof that those conditions are being met.

Our economy’s success should be measured by how well it provides jobs, goods and services in a fair and equitable way, and how well it aids our collective goals, like tackling climate change. Denmark, Poland, Germany, France and others have started putting similar conditions on companies seeking government bailouts. Canada should too. SOURCE 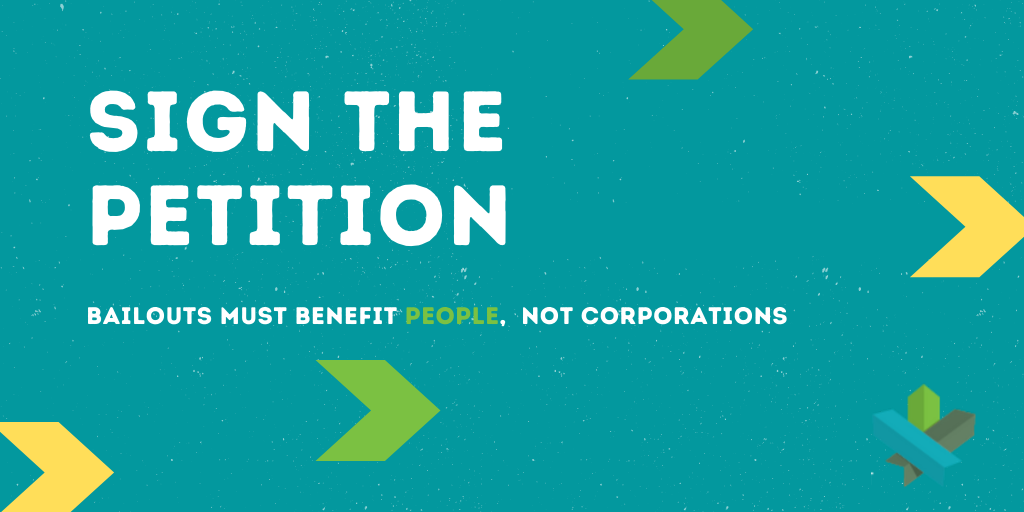 We need to take action now.

Send a message to your MP that corporate bailouts must pass these five tests:

As Katrina mentioned, the coronavirus crisis has pushed many businesses and corporations to the edge and will be searching for bailouts. While government assistance is necessary to protect jobs and workers, the government needs to ensure full transparency and disclosure.

Strict conditions should be placed on large loans and other significant financial support going out the door to big corporations. Any bailout must benefit people, not corporations.

Take action now and tell your local MP that corporate bailouts must pass the “five tests”.