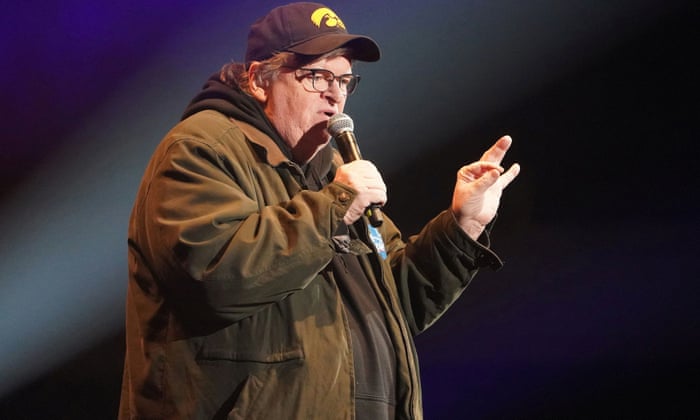 The executive director of Planet of the Humans, Michael Moore, has defended the film against criticism from environmentalists saying he wanted to ignite a discussion. Photograph: Carlo Allegri/Reuters

Planet of the Humans is an environmental documentary that has enraged renewable energy experts and environmentalists, with some calling for its high-profile executive producer, Michael Moore, to apologise.

It was released for free less than two weeks ago, and at the time of writing had had close to 5m views on YouTube.

Across its 102 minutes, the film’s producer and narrator, Jeff Gibbs, weaves a disjointed narrative that renewable energy is just as bad as fossil fuels, high-profile environmentalists are corrupted by capitalism and population growth is the great unspoken enemy.

“It is truly demoralising how much damage this film has done at a moment when many are ready for deep change,” said the Canadian activist and journalist Naomi Klein.

“There are important critiques of an environmentalism that refuses to reckon with unlimited consumption and growth. But this film ain’t it.”

Moore has continued to defend the film against a swath of critical articles.

Why are so many people so angry? Here are some of the key issues, but this is not even close to being an exhaustive list.

Renewables are just as bad as fossil fuels?

It criticises renewable energy – particularly solar and wind – in part because you need varying amounts of materials, energy and metals to make them.

For anyone who has thought for more than a minute about what it takes to build that solar panel or those wind turbines, it should be no revelation that some materials and energy are needed. There’s no such thing as a free lunch.

But the film leaves the viewer thinking there is no net gain from renewable technologies and does not, for example, look at any cradle-to-grave analysis of the technologies it criticises.

“The myth that life-cycle energy invested [and carbon emissions] in building renewable energy technologies is comparable with the lifetime energy generation is false,” says Diesendorf.

In the film Gibbs says: “I learned that solar panels don’t last forever either.” You would think most people would know that.

Early in the film, Gibbs walks with an environment group protesting a plan to put up 21 wind turbines at Lowell Mountain in Vermont, a row that played out in 2011 (another hint at the age of the film).

We wanted to ignite a discussion, and that’s happened

An unnamed campaigner tells Gibbs the power grid needs to run idle when the wind drops and that this causes a “bigger footprint” than just running the grid off fossil fuels.

Gibbs takes the speaker’s word but Diesendorf says this is an old myth disproved by real world examples of power grids running with high penetrations of renewable energy – with and without storage such as batteries and hydro power.

The pace of change and development in the renewable energy industry is rapid so a film that wants to inform viewers should be as up-to-date as possible.

But the film is riddled with footage, segments and issues that are a decade or so old.

Gibbs attends the launch of the Chevy Volt, a car launched 10 years ago. He criticises it because it’s recharged from a power grid in Michigan dominated by coal.

Taking a very old example of an electric car operating in one place should not be the basis for forming a judgment about the role of electric cars in 2020, yet the film does.

Gibbs tours a “football field-sized” solar installation called the Cedar Street solar array in Lansing, Michigan. An energy boss says to camera that the panels have an efficiency of a “little less than 8%” and that the array could power only about 10 city homes a year.

What the film doesn’t say is that the array was installed as a pilot project in 2008.

One energy writer to have looked closely at many of the claims in the film is Australian Ketan Joshi who says looking at a solar array from 12 years ago is “an absolute eternity in solar development years”.

Diesendorf says panels with an 8% efficiency “were on the market several decades ago” and now most commercial panels have an efficiency above 20%.

The film spends time looking at biomass energy or, more specifically, one subset of biomass technology that is essentially burning trees and woodchips.

Gibbs has been a long-time biomass critic (an old article of his includes a photograph taken while filming footage that appears in the film suggesting that a scene showing clear-felled trees is at least 10 years old).

I wrote the producer and director to set the record straight, and never heard back from them

Burning trees for energy is very problematic but there are reasons why under some circumstances it is not as bad as burning fossil fuels from a greenhouse gas perspective.

One reason is part of climate change 101. Burning fossil fuels liberates carbon atoms that were removed from the Earth’s active carbon cycle millions of years ago. Burning trees moves CO2 back into the biosphere that was sequestered only in recent decades.

To an uninformed viewer, the film might look to be getting some purchase when it shows high-profile environmentalists – namely the author and activist Bill McKibben – supporting burning wood.

McKibben founded his 350.org climate group at Middlebury College, and the film has footage of him at an opening of a biomass gasification plant there, saying technology like that should be everywhere.

That footage was from 2009 and as McKibben has pointed out since the film was released, he very publicly denounced the idea of burning wood for energy in 2016. The film did not make this clear.

McKibben says he heard about the plans for the documentary last year: “I wrote the producer and director to set the record straight, and never heard back from them. That seems like bad journalism, and bad faith.”

Gibbs says he did not get McKibben’s communication and even if he had he would not have changed the film.

That aside, Diesendorf says the film’s treatment of bioenergy is simplistic because while some methods, such as ethanol from corn, are environmentally damaging, ethanol from waste starch is not.

He says the film creates a false impression that bioenergy as expected to have a large contribution to energy needs in the future. “The truth is that some see it playing a minor role while almost all the others reject it entirely. Hardly anyone sees it as playing an important role.”

Planet of the Humans is a film that is almost entirely devoid of solutions to the existential crisis that its producers say they are deeply concerned about.

It rightly raises questions about rampant consumption and the planet’s dwindling ecosystems. As some of the examples also show, the film is long out-of-date and there’s no evidence that attempts were made to revise its content or its premise as new information became available and, presumably, the film sat idle in multiple parts for many years.

Gibbs, Moore and fellow producer Ozzie Zehner, who is featured prominently, have defended the documentary.

Gibbs says they had “gone to great lengths” to talk to wind and solar experts.

“We need our environmental leaders, but we are in the wrong story,” he says in an interview with the Hill.

“We are asking questions about what we say is going to save the world, and it should be permitted to have discussions among people who believe in climate change – and know the environment is in trouble – about

“That was our intent – to trigger a discussion and raise a lot of questions, but we don’t have all the answers.”

Moore adds: “We wanted to ignite a discussion, and that’s happened.”

He’s certainly right about that. SOURCE