Students across generations are flocking to online crash courses on movement building and the Green New Deal. 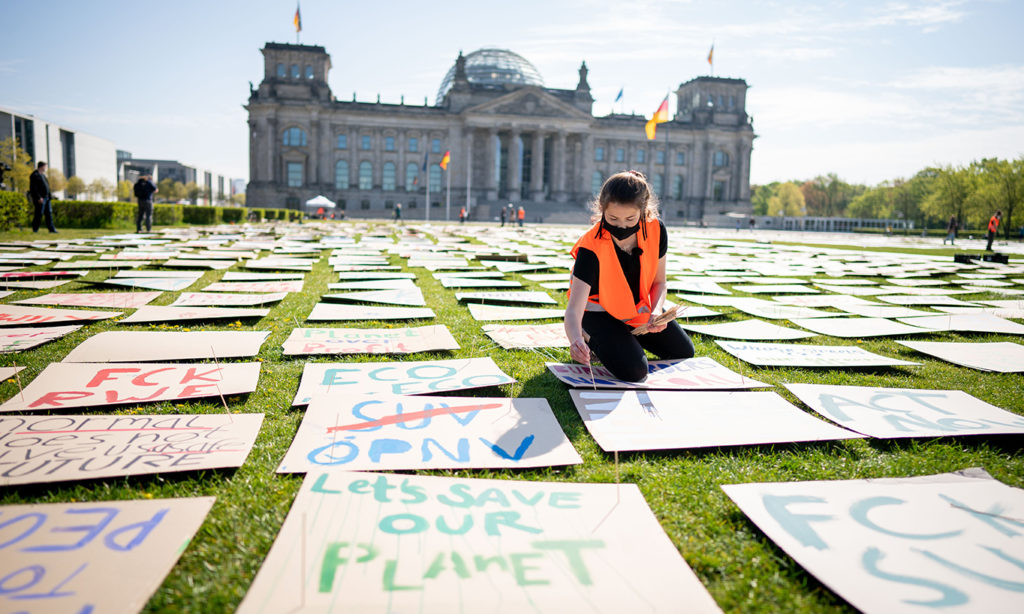 Luisa Neubauer of Fridays for Future lays out protest posters for the alternative climate strike on the Reichstag meadow in Berlin, Germany on April 24, 2020. Because of the continuing spread of the corona virus, the climate strike is being digitally distributed online. PHOTO BY KAY NIETFELD / PICTURE ALLIANCE / GETTY IMAGES

n any given weekday before the coronavirus pandemic hit, Michelle Cohen could be found in her Los Angeles office advising students on how to apply for an apprenticeship, or which classes they need to take before earning a high school equivalency diploma. But when public schools in the district shifted to online learning in March, Cohen, who has been an educator for more than 20 years, decided to embrace a new role as a student, in a class led by two instructors who were decades younger than her.

Cohen, who is 53, felt a little uncomfortable at first. Some of the other students in the Zoom classroom were clad in matching pajama sets, sitting knee-to-knee on the floor with siblings, with twin beds and movie posters behind them. “Am I a weirdo?” she asked herself, thinking she could be her classmates’ mother, even grandmother. Eventually, in a breakout room, Cohen was relieved to find that plenty of other adults were in the class, some of whom were older than her.

Sunrise School, as it’s called, is an online training program the youth-led climate activist organization the Sunrise Movement pulled together as soon as it became clear that students would be stuck at home for the spring semester. The group has three levels of online learning experiences designed to train thousands of new leaders in how to push elected officials to pass a Green New Deal.

Cohen enrolled in “The Green New Deal & Coronavirus Crash Course,” an intro class, and showed up every day at 6 p.m. for the four sessions. Amid California’s shelter-in-place order, it felt good to see the same group of people every night, dialing in from across the U.S. and Canada. Her teachers, Genai Lewis and Simon Metcalf, both in their mid-20s, explained what the class would cover with a set of minimalist slides splashed with text and borders in the yellow, black, and white customary of the Sunrise Movement’s T-shirts and protest banners.

Students were asked to analyze a black-and-white photo of a bread line, and to list some of the programs that emerged from the Great Depression, such as Social Security and the Federal Deposit Insurance Corporation. Metcalf went on to highlight some of the parallels between the economic fallout of the 1930s and that unfolding in 2020, including unemployment rates between 25% and 30%. The Green New Deal has the potential to jumpstart the economy through green infrastructure projects that employ people on a similar scale as The New Deal, Metcalf explained, though it will take massive political pressure if it is to be an equitable suite of policies. “There was a lot of racism in the original New Deal,” he says, pointing to how the Federal Housing Authority pioneered redlining.

The class dove into the legislative process, too, Cohen recalls. “They taught me about what an ‘appetizer bill’ is,” she says, referring to how programs that rose out of President Franklin D. Roosevelt’s first 100 days in office in 1933, known as the First New Deal, were far less progressive than those introduced as part of the Second New Deal in 1935 and 1936. “You can’t throw everything you want into the first bill,” Cohen sums up.

An Education in Activism Online

The Sunrise Movement isn’t the only youth-led climate group bringing lectures, homework, and pop quizzes to the screens and smartphones we’re all glued to. Fridays For Future, the youth climate action group founded by Swedish activist Greta Thunberg, has hosted regular Friday digital strikes and webinars featuring the likes of activist and award-winning writer Naomi Klein. And the BIPOC-led youth activist group Zero Hour has put out podcasts focused on a new theme each week aiming to call attention to the root causes of the climate crisis.

The lessons these groups are creating appear to be in high demand. According to Aru Shiney-Ajay, the Sunrise Movement’s training director, the group expected about 600 students for the first session of the crash course Cohen completed in March. As it turned out, 3,500 people signed up. At the time of this writing, 10,000 people have completed a Sunrise School course.

Digital organizing has also served as an outlet for young activists who are antsy and anxious at home. Yolian Ogbu is a 20-year-old political science major and part of Zero Hour’s operations team. Amid the lockdown in Denton, Texas, Ogbu says, focusing on school has become nearly impossible. “I’m sitting here doing essays thinking about my parents that have to go to work every day, because they’re considered essential, and not get paid hardly anything to put their lives on the line,” she says. Her mother works as a nurse, and her father is a truck driver.

What Ogbu does have brain space and energy for, she says, is jumping on Slack or Zoom to connect with other organizers. As a result of collaborations with Zero Hour members across the country, the internet is exploding with webinars, Tik-Tok videos, Facebook Live events, Instagram infographics, and podcasts that tackle themes such as environmental racism and patriarchy. “We like to make content that is easily digestible,” she says. Making it entertaining helps, too. “As a Black, immigrant college student who is first generation, we look at our traumas through a lens of humor.”

On a recent Zero Hour webinar, for example, 20-year-old co-host Sam Arechiga took a question from an anonymous participant on how colonialism has contributed to the climate crisis. Arechiga boiled down her mini-lecture into one core concept: “Capitalism has tried to alienate us from nature and… anyone who disagrees can … fight me,” she said, laughing. The presentation Arechiga co-led broke down definitions of “missionary colonialism” versus “settler colonialism.” Co-host Ethan Wright, also 20, pointed out how the education system has been colonized too: English is the primary mode of instruction, for example, which has contributed to the loss of first languages for migrant and Indigenous students.

Much like Sunrise School, Zero Hour webinars have attracted a diverse audience. Thirty-five-year-old Rebecca Ersek dialed into the colonialism webinar from Delaware. Ersek is new to activism. She joined a climate strike in September, which was her first protest. Now that she’s stuck at home from her job at an industrial pump company, she’s logged into as many Zero Hour webinars as her schedule allows. “I never had any classes about climate change, let alone the various structures of oppression of the systems we live in and how it’s used to uphold the power of the elite few,” she said in a Facebook message. She thinks the format of the presentations has been effective, too: the sharp colors, the layout, and how much ground the young co-facilitators cover in the course of an hour. “I have so much more to learn, and making [the webinars] accessible to everyone the way Zero Hour does is sacred work,” she wrote.

Doing the Work While Staying Apart

Difficult conversations have taken place in these spaces, on topics that don’t traditionally arise in the halls of an algebra or AP biology class. During a Sunrise School session in April, younger participants mentioned the impression that older people don’t care about climate change because they won’t live to see the worst of it. This sparked a flurry of frustrated comments from older participants, some of whom implored younger people to stop with the stereotypes. “I really dislike the ‘OK boomer’ meme; I think it’s hurtful and misleading,” wrote one participant, prompting a conversation about the importance of building an intergenerational movement.

In the Zero Hour webinar on colonialism, one participant asked whether they were personally complicit in climate breakdown because they worked on Wall Street, a job they had worked hard to earn. Arechiga didn’t skip a beat. “Yes,” she said. Instead of seeing other people as obstacles that we need to “beat” to be successful, we need to shift our mentality, she explained. “We have to question the work that we put into this wealth.” She then gave participants a reading list on the topic, which included an article on the three pillars of white supremacy; Frantz Fanon’s The Wretched of the Earth; and Chinua Achebe’s Things Fall Apart.

For Ersek, the budding activist, the political education she’s gotten from Zero Hour has shaken her up. “Seeing the work these young folks are doing is so inspiring that I cannot just keep on with business as usual,” she wrote. Within the year, she has plans to leave her job and move from Delaware to Minnesota, where she’ll join efforts to fight Line 3, an oil pipeline rerouted to transport oil from Alberta to the western tip of Lake Superior. Cohen, too, has gotten more involved with Sunrise; she now plans to organize climate-concerned teachers in her union to show up for direct actions aimed at pressuring lawmakers to pass a Green New Deal.

Since Ogbu has been stuck at home, in addition to her work with Zero Hour, she has helped organize a rent strike in her town, supported her mother in securing hazard pay, and rallied support for a general strike on May 1 to demand health care and economic security for everyone who lives in the U.S. “Organizing is intertwined with our survival as a people, and that can’t take a back seat,” she says. “I finally feel like that is being heard more across a bigger platform.” SOURCE

LEANNA FIRST-ARAI is an educator and writer intent on bringing awareness to the connections between climate breakdown and economic & racial injustice.