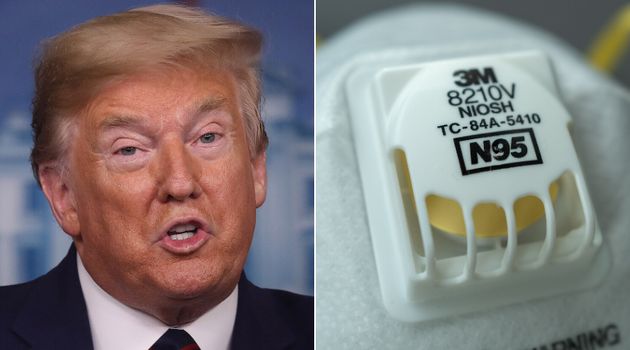 U.S. President Donald Trump, left, and a N95 respirator mask made by 3M. The company is facing increased demand for the popular masks from countries around the world. GETTY IMAGES

Toronto – April 28, 2020 – Earlier this month, U.S. President Donald Trump asked 3M to stop shipping N95 masks to Canada and other countries out of fear that the United States might experience a shortfall in the personal protective equipment. The company pushed back, and an agreement was reached to continue exports of the masks. But Trump’s request caused many Canadians to question whether his administration is willing to uphold the basic principles and agreements that sustain our trade relationship with the U.S.

Throughout Trump’s presidency, we have seen that rules and agreements are often viewed as irritants that get in the way of him moving on his agenda, which raises serious questions about whether CUSMA will be effective and legally enforced as long as Trump is president.

There were already many concerns with the trade agreement from the Canadian perspective. Two examples are drug costs and the protection of our dairy industry. In both cases, the federal government made concessions. Longer protection periods for biological drug patents against generics and longer copyright periods will increase drug costs at a time when Canada is seriously considering a national pharmacare program.

The federal government has lauded CUSMA’s side chapters on the environment and labour rights as instruments to strengthen the trade deal, but we have to wonder whether the U.S. – under President Trump – will abide by these provisions. Recent events suggest it will not. The labour chapter promotes ‘the right to freedom of association and collective bargaining,’ but the Trump-dominated National Labor Relations Board (NLRB) has advanced an anti-worker agenda that has undermined Americans’ ability to form unions and engage in collective bargaining. Using the COVID-19 pandemic as cover, the NLRB announced new rules on April 3 that make unionizing nearly impossible and decertifying easier.

Meanwhile, the agreement on environmental cooperation sounds good on paper, but what good will it do when the Trump administration has already rolled back Obama-era emissions standards, the U.S. Environmental Protection Agency (EPA) has indefinitely suspended environmental enforcement, and Trump continues to promote the use of coal?

The actions of U.S. President Donald Trump raise an important question for Canadians: will the Canada-United States-Mexico Agreement (CUSMA) actually be enforced? Because when it comes to trade, it appears the Trump administration does whatever it wants, whenever it pleases. SOURCE