Some questions from our readers are answered 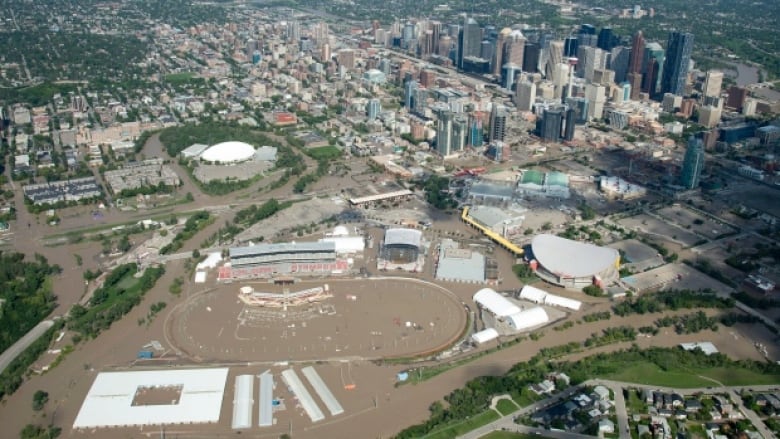 In June 2013, a massive storm dumped record amounts of rain on southern Alberta, leading to devastating flooding in Calgary and nearby communities. According to a new report, Canada will see an increase in precipitation across the country though summer rainfall may decrease. (Jonathan Hayward/Canadian Press)

On Monday, a report commissioned by Environment and Climate Change Canada called Canada’s Changing Climate Report said that, on average, Canada is warming at twice the rate of the rest of the world.

Among some of the other findings were:

But readers had some lingering questions.

It might seem strange that the report only referenced data from 1948, since we know that cities have data that go further back. It’s not some way of manipulating the data, but rather it is the time at which national records were kept on a consistent basis.

“It’s a question of the availability of datasets, and Environment Canada’s datasets are quite poor,” said Dianne Saxe, former environmental commissioner of Ontario. “What they look for is continuous record-keeping in the same place over a long period of time, and we don’t have a lot of that.”

Is Canada changing the Arctic?

The effects seen across the Arctic, including shrinking sea ice and and less snow cover, are having a dire effect on global temperatures. Sea ice and snow cover are used to reflect the sun’s radiation back into space, but with more of the dark waters of the ocean exposed, that radiation is absorbed and causes heating and creates what is called a “positive feedback loop.”

Saxe, whose office was shut down by the Ontario government on Monday, said that there are two things to consider when considering what is causing the rapidly melting ice.

An increase of carbon dioxide may be the biggest problem, she says, but it’s the short-term climate forces that need attention.

“The use of diesel in the North in snowy areas has an extraordinary effect at melting snow because it lets out these little soot particles that absorb heat into the air and darkens the snow.”

Saxe says that some solutions would be including filters on vehicles that use diesel and changing out wood stoves.

“The greenhouse gas is the biggest problem, but the short-term climate forces are faster, and we could actually fix them easily.”

How did the report acquire the data?

The report also acknowledged that Indigenous observations and knowledge play an important role in understanding climate change and “the ability of human and natural systems to adapt.”

The Arctic and Antarctic are two different beasts. While the Arctic exists as mostly sea ice, the Antarctic is a landmass that includes sea ice as well as glaciers. The ocean processes that drive them are different as well, and Antarctica has glaciers, an ice sheet and sea ice in the mix.

The signal is loud and clear in the Arctic: sea ice is not only melting, but it’s thinning, which in turn makes it more susceptible to further melt.

In Antarctica, the signal isn’t so clear. The East Antarctic Ice Sheet — which sits atop the Antarctic landmass — is fairly stable. And while West Antarctica is colder, the warming is much higher in the region, which in turn is causing warmer ocean water to thin the ice.

A new study published in January suggested that Antarctic ice is melting six times faster than it did in the 1980s.

So while the Arctic is seeing the most dramatic effect of climate change, the Antarctic is also seeing its own effects, though at a somewhat slower pace. And that’s good news since if the entire Antarctic ice sheet melted, it would raise sea level by 57 metres.

“No,” said Saxe. “I didn’t see anything new in this report. However, I’m glad this is getting people’s attention.”

Saxe notes that when you look at the climate data available for Toronto, which goes back to 1841, it shows the city has warmed to almost three times the global average. This is data that was already available.

As well, it was already understood that humans are the main drivers of climate change, though there are natural forces at work. However, the natural forces cannot account for the rapid change we are observing.

Normal can’t come back. We’ve locked in a huge amount of change that is still going to come our way.– Dianne Saxe, former environmental commissioner of Ontario

While people may want a return to normal, Saxe said, that’s not going to happen.

“Normal can’t come back,” she said. “We’ve locked in a huge amount of change that is still going to come our way.” SOURCE

Nicole Mortillaro, Senior Reporter, Science
Nicole has an avid interest in all things science. As an amateur astronomer, Nicole can be found looking up at the night sky appreciating the marvels of our universe. She is the editor of the Journal of the Royal Astronomical Society of Canada and the author of several books.