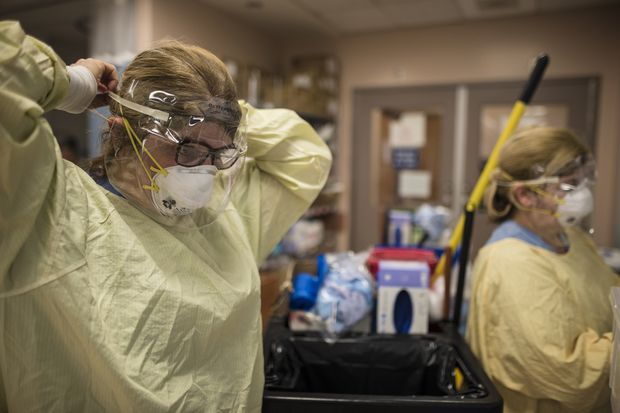 Lucia Janerio applies a face shield, along with full personal protective equipment, before cleaning a negative pressure room at the ER of North York General Hospital, on March 2, 2020. TIJANA MARTIN/THE GLOBE AND MAIL

At the height of Ontario’s shortage of personal protective equipment, and with the province a week away from running out of N95 respirator masks, the government struck a deal to buy 100 million of them – only to see it evaporate.

The broker that Ontario used, a U.S. company called LDR Investment, which also goes by the name LDR Growth Partners, told the province it could supply masks manufactured by Minnesota-based 3M Co. LDR told The Globe and Mail its third-party supplier did not follow through. 3M told The Globe it has no relationship with LDR.

LDR said it engaged with “numerous parties that represented themselves as third-party suppliers of 3M products in our attempts to uncover emergency, immediately-available supply.”

The masks are vital for front-line medical staff conducting high-risk procedures on COVID-19 patients. Procuring them has been a challenge. The same week in early April that the deal went south, Premier Doug Ford sounded the alarm on his province’s stockpile and appealed for help from Ottawa and other provinces.

The failed deal highlights the “Wild West” market that Deputy Prime Minister Chrystia Freeland says all governments are navigating to get the masks. They are ditching traditional procurement practices and sometimes turn to unfamiliar sources. Procurement experts say that’s leading to higher prices and more uncertainty.

Ontario sent a proof of funds letter to LDR on April 4.

“Funding has been made available by the government of Ontario, and will flow into [an] escrow account on Monday, April 6, 2020, to support the purchase of 100,000,000 3M N95 respirator masks,” reads the letter signed by Health Minister Christine Elliott and obtained by The Globe.

The letter stipulated that “prior to making a final commitment” the province would require a technical inspection of the masks, performed in Ontario by an agent that its health agency selected.

The order would have supplied Ontario well beyond its short-term needs. The province expected to use 250,000 N95 masks in a week, according to another document obtained by The Globe.

According to a source, the province was given an address for a location where the masks were stored. The address had a connection with 3M, so provincial officials called the manufacturer directly to verify the products’ availability – only to find out there weren’t any.

“Unfortunately for our clients, many of these third-party suppliers did not have legitimate inventory,” Ryan Martin, a partner at LDR, said in a statement.
The Globe is not identifying the sources in this story because they were not authorized to speak publicly.

Ms. Elliott’s spokesperson said the province lost no money in the failed purchase.

“We are no longer engaged with [LDR] in any capacity. What was communicated never materialized,” Travis Kann said.

The province declined to disclose how much it had planned to pay for the masks. Last week, at a House of Commons committee, Bill Matthews, the deputy minister responsible for procurement, said N95 masks, which earlier sold for $1.20 apiece, are now going for as much as five times that price.

“LDR Growth Partners is not a 3M-authorized distributor or channel partner, and does not, to 3M’s knowledge, have the ability to procure 100 million 3M respirators,” the company said in a statement.

LDR, which was founded by former military officers, blamed the supplier, which it did not name, for the collapsed deal.

“We are disappointed that third-party suppliers did not deliver on their promises of supply during this critical time,” Mr. Martin said, adding that he is happy no funds were expended. He said the company has been able to get supplies for other governments and health care professionals.

Mr. Martin said LDR in February “facilitated an order with 3M’s U.S. government procurement team.” In its work with Ontario, he said the company’s role was to “vet purported third-party inventory holders in an emergency search for immediate to near-term inventory.”

It is “not completely unusual” for a government to issue a proof of funds letter, but it isn’t generally needed when the supplier is known, said Mahesh Nagarajan, chair of the operations and logistics division at the University of British Columbia’s Sauder School of Business.

“For a product this critical, normally they would not go with such a supplier unless there would be a billing, tendering, vetting process … but this is not the time when you do those things,” he said.

Demand for personal protective equipment is only expected to increase as the provincial and federal governments ease the economic-shutdown forced by physical distancing. On Saturday, Prime Minister Justin Trudeau cautioned that some sectors should not reopen without adequate supplies of safety equipment.

Federal government tracking shows that of the 155.4 million N95 masks Ottawa has ordered, 5.3 million have arrived. And a “significant portion” remain in testing, the government’s website says. The Globe has reported that one million N95-equivalent masks from China were faulty. The supplier has committed to replace them, government officials say.

The federal government is working to establish domestic supply for N95 masks, but does not yet have a timeline. One manufacturer, Quebec-based AMD Medicom Inc., said local production of N95 masks is set to start in August. SOURCE