As the city prepares to end lockdown, Mayor Anne Hidalgo plans to use bike lanes, buses, and social distancing to keep more cars off the roads and reduce pollution. 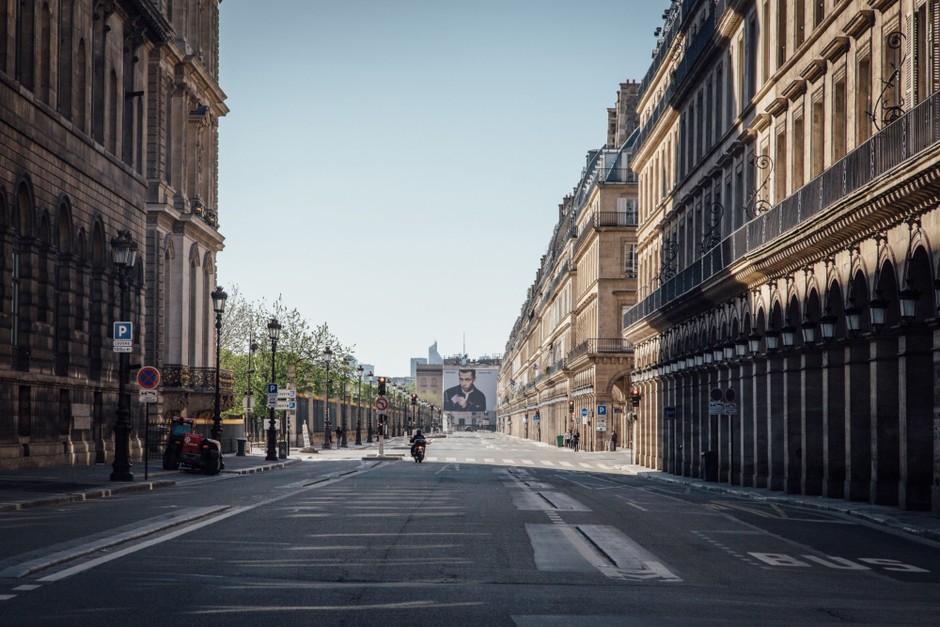 The Rue de Rivoli, a central route in Paris, will be devoted mostly to bike and pedestrian traffic after lockdown is lifted. Cyril Marcilhacy/Bloomberg

Returning to a Paris dominated by cars after lockdown ends is “out of the question,” according to the city’s mayor, Anne Hidalgo. Speaking Tuesday at a special session of the Paris City Council on transitioning after France’s national lockdown eases on May 11, Hidalgo was emphatic about maintaining the anti-pollution and anti-congestion measures introduced during her tenure, even as cities rethink transportation policies to avoid Covid-19 transmission.

“I say in all firmness that it is out of the question that we allow ourselves to be invaded by cars, and by pollution,” she said. “It will make the health crisis worse. Pollution is already in itself a health crisis and a danger — and pollution joined up with coronavirus is a particularly dangerous cocktail. So it’s out of the question to think that arriving in the heart of the city by car is any sort of solution, when it could actually aggravate the situation.”

During the height of lockdowns around the world, car traffic slowed to a trickle and air pollution plummeted with it. But as cities consider how to reopen while avoiding crowding on public transportation, it remains unknown how intense the surge in car use will be. This adds new urgency to Hidalgo’s pre-pandemic agenda to dramatically reduce the footprint of cars on the city. And she is joining several other European city leaders in strengthening commitments to cultivate other modes of transportation, particularly biking.
Hidalgo’s assertion of a link between Covid-19 and pollution is not without foundation. Already in the pandemic’s infancy, studies have suggested a link between poor air quality and Covid-19 deaths. Researchers at Harvard found that an increase in particulate pollution of just one microgram per cubic meter could increase a sufferer’s chances of dying by 15%. Air pollution is also known to exacerbate conditions such as asthma that may make the risk of Covid-19 mortality higher.
“Pollution joined up with coronavirus is a particularly dangerous cocktail.”

Hidalgo’s anti-car program is focused on remodeling the city core to make more space for pedestrians and cyclists, while barring older, more polluting cars from entering the city. This process has seen major thoroughfares for motor vehicles pedestrianized and the steady phasing out of car lanes and parking spots to create wider sidewalks and greenery. Earlier this year, Paris adopted a 15-minute neighborhood blueprint for future development that would see yet more of the city’s surface area taken away from car lanes and repurposed as community spaces.

Hidalgo’s statement shows a clear refusal to backtrack on this push. It may also be a hint of new forthcoming plans to restrict car access. The end of lockdown on May 11 will not mean the return of normal transit habits nationally: Anyone wishing to travel beyond a 100-kilometer zone around Paris, pictured in the image tweeted below, will require official permission from national authorities. Even if it does not affect commuters, this restriction should still mean that motor traffic in Paris will not immediately return to pre-pandemic levels.

On public transit, meanwhile, Paris will need to find ways to prevent trains and buses from becoming overloaded so people can continue practicing social distancing. The first precautionary measure, Hidalgo said in her city council address, is for anyone in Greater Paris who is currently working from home to continue doing so. Those who take the metro will be required to wear masks, and hand sanitizer will be provided at all ticket barriers. Bus services will also be significantly expanded. The most striking measure proposed by the mayor, however, is the creation of new, fully protected bike lanes extending from the city’s heart right out into the distant suburbs.
The tracks were already in the pipeline before the pandemic, but they’ve been expedited as an emergency measures so that more people across Greater Paris can commute by bike. Within Paris itself, the new broad cycle paths will be carved out from road space to shadow the route of three metro lines. For the immediate future,  the axial Rue de Rivoli will become a space almost entirely for pedestrians and cyclists, with buses and taxis circulating only along a narrow central strip of the road. SOURCE