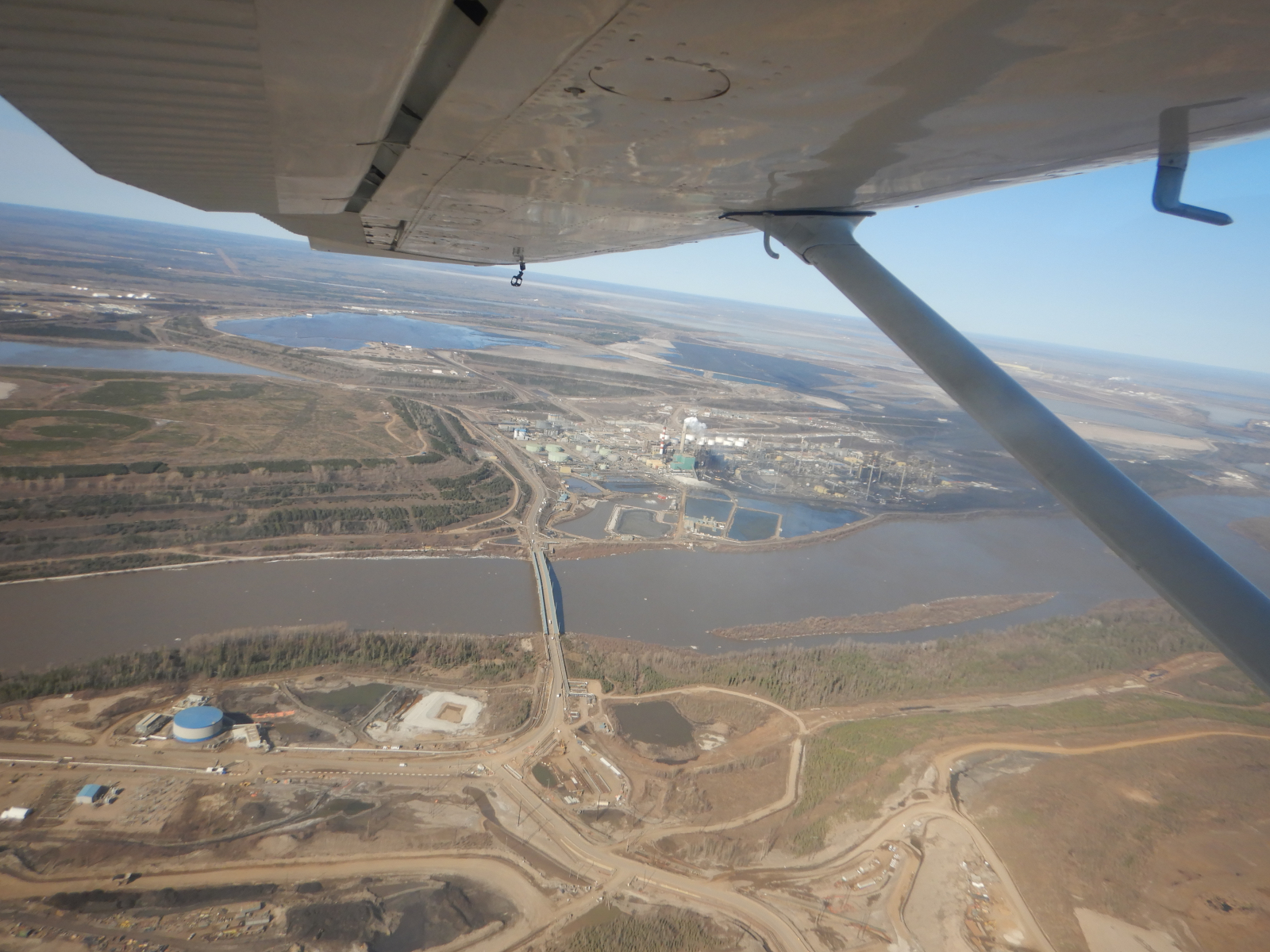 Though floodwaters have overwhelmed Fort McMurray, the Athabasca River, shown here near a Suncor facility, remains clear of jams near the oilsands, the Alberta Energy Regulator says. Photo courtesy Alberta Environment and Parks

Rising floodwaters along northern Alberta’s Athabasca River are not in danger of breaching the massive ponds holding toxic waste from the oilsands, the province’s energy regulator said Wednesday.

Several rivers in the region are flooding this week as chunks of spring ice melt and block waterways, a phenomenon known as an ice jam. The swelling waters have flooded downtown Fort McMurray, upstream of the oilsands, raising concerns about what could happen if the rivers breach the ponds where oilsands “tailings,” or waste, are stored.

“At the present time, and based on current information, there is no imminent risk of floodwater breaching any tailings ponds.”

Oilsands tailings are a thick, yogurt-like mixture left over from the process of mining and extracting bitumen. The goop is toxic, containing hazardous naphthenic acids alongside clay, water and leftover remnants of bitumen.

Oil companies store the rapidly accumulating waste — with a total volume of more than one trillion litres — in reservoirs that now cover an area larger than the city of Vancouver.

Some tailings are stored in former mine pits, while others are enclosed by earthen dams, which industry says are secure.

Spring ice jams are common along the Athabasca River, which flows through Fort McMurray and the oilsands before emptying into Lake Athabasca in northeastern Alberta. But this spring’s floods are exceptionally bad, with Alberta Premier Jason Kenney calling them a once-in-a-century event.

Two maps that compare the location of oil sands tailing ponds and flood zones that are continuously studied in the area. 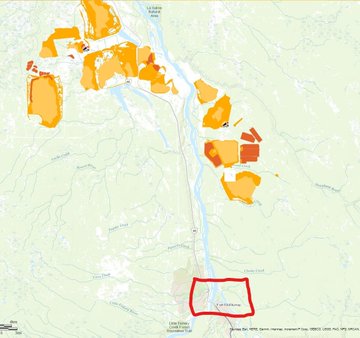 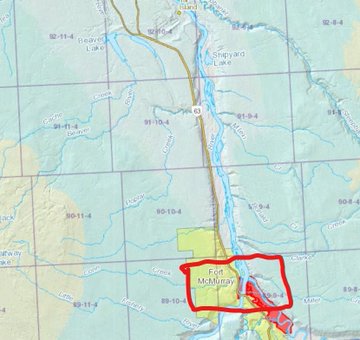 The current ice jam along the Athabasca is centred in Fort McMurray, some 30 kilometres away from the nearest oilsands plant to the north. And although the floods have devastated Fort McMurray, causing one death and widespread evacuations, the rising waters don’t appear to have come close to spilling into tailings ponds — a scenario that could have a catastrophic impact on the land and Indigenous people living nearby.

Flooding in Fort McMurray has raised concerns that the rising waters could breach toxic oilsands tailings ponds. The Alberta Energy Regulator says all tailings ponds are intact, however, and teams are monitoring them closely. #ableg

There was an ice jam near Fort McKay, a First Nations and Métis community in the oilsands north of Fort McMurray, that flooded some low-lying areas, Alberta Environment and Parks said. That blockage cleared on April 28, though the area remains under an “ice jam watch.”

The floodwaters may rise before the river fully clears, but experts say the tailings ponds are not expected to be at risk, the AER said Wednesday.

Downstream of the oilsands, the Athabasca River empties into the Peace-Athabasca Delta, a UNESCO World Heritage Site known for its wood bison herds and its importance for flocks of migratory birds. And many of the Cree, Dene and Métis people in the region hunt and trap along the river.

Some Indigenous people in the area are worried about what could happen if these floodwaters or any future ones were to reach the oilsands, as several tailings ponds are relatively close to the river, said Jesse Cardinal, the interim executive director of Keepers of the Water, an Indigenous-led conservation group.

“Because of climate change, we’re going to start seeing more flooding,” Cardinal said. “Really, what could you do if a tailings pond breaches?”

A breach could be even more devastating because more Indigenous people are relying on hunting and trapping to avoid using grocery stores during the COVID-19 pandemic, Cardinal said.

Though studies have suggested for years that oilsands tailings may be seeping into groundwater and the Athabasca River, a full breach of an oilsands tailings dam hasn’t happened. Industry says the dams are safe and a collapse would be very unlikely.

Tailings dams have breached in other Canadian mining industries.

The Obed spill in particular shows how dangerous a similar incident in the oilsands could be, said Cardinal. “It was so big, it flooded out some of the forest,” she added.

“The lesson from Mount Polley is that those dams can breach,” said Dale Marshall of Environmental Defence, a green non-profit.

If it were to happen in the oilsands, he said, toxic materials would likely remain in the water and sediment at the bottom of the river and accumulate up the food chain.

“The big picture on this is that there are really negative impacts to oil and gas development that should be taken into account as we think about future energy development,” Marshall added.

“It does further reinforce the need to transition away from these energy sources that have all kinds of risks, environment and health.”

The Alberta Energy Regulator inspects tailings dams annually, and says a breach of any of them would have “extreme consequences.”

In 2018, the most recent year for which inspection results are available, the regulator said it found one breach of its rules at an oilsands dam, and companies voluntarily disclosed three other issues (it wasn’t clear if the issues were identified on tailings dams or other types of dams in the oilsands). None of the problems posed a significant risk, the regulator said.

The regulator also requires companies to have emergency response plans ready in case of a breach and says it has crews ready to help if the unimaginable was to happen. Those protocols aren’t posted publicly, however, which Cardinal said adds to the uncertainty.

The Athabasca Chipewyan First Nation — in Fort Chipewyan, about 200 kilometres north of Fort McMurray along the river — has been conducting its own flyovers to ensure the tailings dams haven’t breached, Cardinal said. (A spokesperson for the First Nation said they were busy supporting members affected by the floods and dealing with the COVID-19 pandemic, and weren’t able to respond by publication time.)

Oversight of companies’ management of oilsands tailings have been an issue in Alberta for decades.

Despite years of promises that the ponds would stop growing, they have continued to swell. And successive governments have allowed industry to pursue unproven techniques for dealing with the toxic mess, an indication that officials have no idea how to effectively clean up the waste.

Occasionally, tailings ponds make headlines after flocks of migratory birds die after landing on the toxic lakes, mistaking them for natural bodies of water. They can also emit air pollutants.

In August 2018, the Commission for Environmental Cooperation — a NAFTA organization composed of officials from the U.S., Mexico and Canada — announced it would investigate tailings ponds and the threat they pose to surrounding groundwater and rivers.

The cost to clean up the oilsands mining operations facilities could reach an estimated $130 billion, with tailings ponds making up the largest but unknown amount of the figure, according to internal AER calculations revealed in a joint investigation by the Star, Global News and National Observer. That’s $100 billion more than the province had disclosed publicly.

The AER later apologized, saying the estimate had been an “error in judgment.”  SOURCE

Call for military to assist Fort McMurray due to flooding