Now may feel safer, but the virus, unsolved, remains a deadly threat to health and social order. 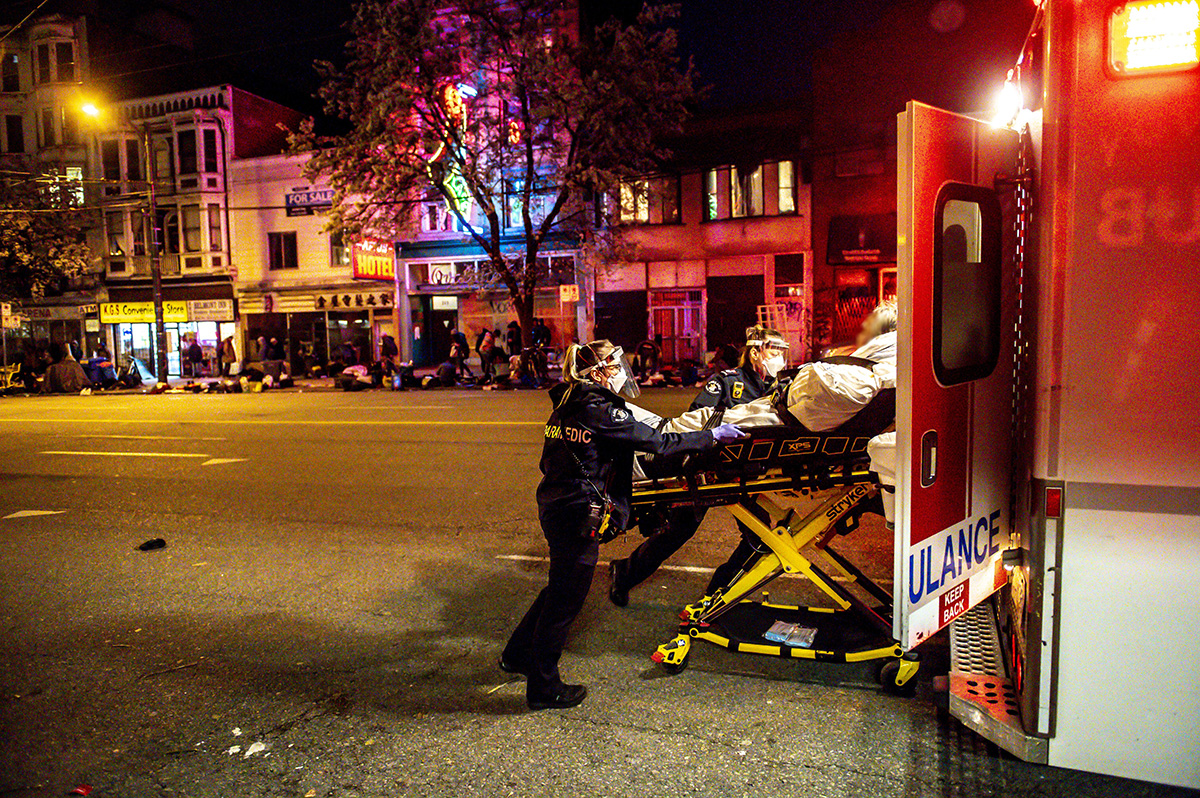 As numbers come down and people get restless for ‘normal,’ remember that flattening the curve doesn’t eliminate the reality of explosive outbreaks. Photo on Vancouver’s Hastings Street by Joshua Berson.

We have now entered the most dangerous phase of this pandemic.

We are all tired of physical isolation.

We are worried about an economic depression in a global economy already undermined by gross inequalities.

We fear for the future, and yearn for something normal even though our exhausted civilization no longer behaves normally.

We want this emergency to end. And many want it to end at any cost.

And that is where the dangers lie. For we now live in the domain of a novel coronavirus.

The virus is but five months old, a mere infant in the scheme of things. By most accounts its global adventures could last two years.

One of the few political leaders who understands the dangers ahead is German Chancellor Angela Merkel, a scientist by training. “Nobody likes to hear this, but it is the truth,” she said last week. “We are not living through the final phase of this crisis, we are still at its beginning. We will still have to live with this virus for a long time.”

But truth is usually the first casualty in any pandemic.

The historian John Barry, author of The Great Influenza, was dismayed to learn how authorities and the press regularly lied during the Spanish flu pandemic. Their key messages consisted of “don’t get scared,” or “it is just the old fashioned grippe” as tens of millions died.

By their very nature pandemics are irrational events that swallow up everything and everybody they reach. This methodical biological invader has barely begun to pull on the tattered threads of our overstretched industrial civilization.

There are only four ways out of this pandemic:

Herd immunity, which assumes immunity can be achieved and even if so will cost tens of millions of deaths while lasting no one knows how long.

A vaccine, assuming it can be made it all, and if so it is at least a year and a half away.

Elimination of the virus in geographies that seal their borders.

Or the virus gradually loses its most harmful effects on the human body and evolves into something like an old-fashioned cold.

Meanwhile, flattening the curve means beating the virus down to a tolerable level that doesn’t overwhelm hospitals and graveyards.

As we have learned, however, even flattening the curve doesn’t eliminate the reality of explosive outbreaks.

To date the pandemic has illuminated our industrial failings in spades. It exposed the fragility woven into the efficiencies we believed were designed into our systems, whether it be long-term care facilities or meat-packing factories.

The virus will continue to illuminate our weaknesses. Whenever and wherever we let down our guard, this virus will almost certainly explode with a bang.

Flattening the curve is not a victory or endpoint but a temporary holding measure. It is merely a behavioural choice that limits our mobility, and therefore the mobility of a highly contagious virus.

Even where the virus has raged explosively, such as New York City or Italy’s Lombardy region, no more than 20 per cent of the population has been infected.

That still leaves 80 per cent of the population susceptible to a second or third wave.

And so we must think clearly and do the following.

Admit what we don’t know

In these early days we don’t have answers to essential questions.

Does getting COVID-19 confer useful immunity and for how long?

If we do develop a working vaccine, how effective will it be? Will it immunize everyone all the time? Will it last for a year or a decade?

But we do know a few truths. We know that wherever this virus burns hottest, from Bergamo to Guayaquil, it kills readily.

We know the poor, the sick and the old are its primary targets. We also know that this virus can cause strokes in young adults and middle-aged people.

And we are just learning about long-term effects. It seems increasingly clear that even young, fit people can die if their level of exposure to the virus is very high.

Therefore easing restrictions before nations have developed disciplined protocols for testing, contact tracing and isolation of the infected will result in more pandemonium, and a longer emergency.

Get better data and act on it

In this dangerous phase, Canada needs to stop treading water. As public health expert Amir Attaran has warned in this publication, we lag behind most developed countries on several fronts. We do not even have a solid national data set upon which to assess the effectiveness of protocols for testing, contact tracing and isolation of the infected.

Countries and jurisdictions that have agilely deployed these tools — places such as New Zealand and South Korea — will have more freedom than nations who have chosen to just stretch the curve.

And nations and jurisdictions that have chosen to eliminate the invader will be able to move from lockdowns to global lockouts.

They will have to police their borders like hawks, re-localize their economies and make do with a minimum of trans-border mobility.

But the real danger will not come just from the haphazard easing of restrictions, but from the psychology of crowds and leaders who pander to their surging emotions for short-term political gain.

Do not bend to crowd emotions

Every day now we are increasingly hearing voices that the virus is not a significant threat, and that the economy and global trade are more important or that “we have idled the nation and all become hypochondriacs.” These voices are coming from the internet, the well-to-do and political leaders of some of the world’s largest economies: the United States and Brazil.

The danger is this: the rule of the crowd has no respect for science or viruses for that matter. The French genius Gustave Le Bon noted in 1896 that crowd psychology is a wrecking ball.

“Crowds are only powerful for destruction. Their rule is always tantamount to a barbarian phase. A civilization involves fixed rules, discipline, a passing from the instinctive to the rational state, forethought for the future, an elevated degree of culture — all of them conditions that crowds, left to themselves, have invariably shown themselves incapable of realizing.”

The crowd mind will demand relief, a return to “normal,” pushing aside the hard rational truths that science and history teach us about this moment. Weak leaders will relent and would-be tyrants will convert emotional cues into consolidated power.

Simone Weil warned about these messages in the 1930s with her fierce clarity: “Once a certain class of people have been placed by the temporal and spiritual authorities outside the ranks of those whose life has value, then nothing comes more naturally to men than murder.”

Do not delude yourself or those you love. This emergency has just begun. Be a strong and active citizen. Demand that leaders ignore the unruly waves of expedience and guide us, instead, carefully through these dangerous waters.