RCMP are investigating after an Indigenous woman reported that several men stormed into a protest encampment and drove a truck into her home.

Kanahus Manuel is a Secwepemc woman who is part of Tiny House Warriors, a group that has set up a village of five mobile miniature homes on unceded land to protest the expansion of the Trans Mountain pipeline and the construction of nearby work camps, sometimes referred to as “man camps.”

They have been on the site since July 2018 and live there full time, on what is traditional Secwepemcúĺecw land near Blue River, about two and a half hours northeast of Kamloops, B.C. The Secwepemc, also known as Shuswap people, traditionally reside on a large territory in the interior of B.C.

On Sunday evening, around 10:45 p.m., the woman — whose legal name is Amanda Soper but who goes by the name Manuel — alleges, a group of men driving all-terrain vehicles plowed through the wood barricade that surrounds the homes and began yelling at her.

Please help identify these white males that came to my home last night, rammed our barricade, assaulted Indigenous male guest I have at my home, stole my truck and smashed it into my tiny home and then smashed my truck into a street light pole. Took my keys and fled! #nomancamps 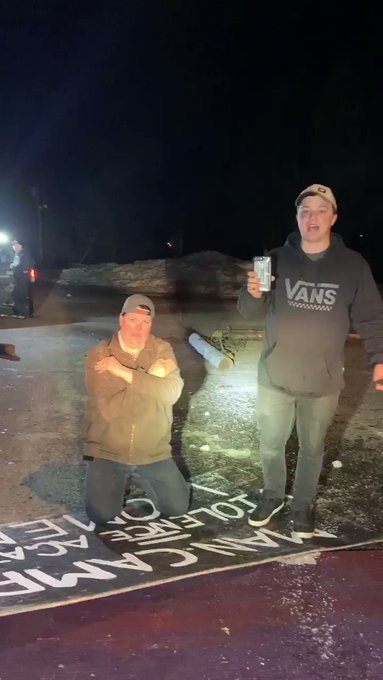 The men did not identify themselves but let her know they were supporters of the oil and gas industry. The vehicles had Alberta licence plates, according to Manuel.

She said that as soon as the men arrived on site, they started tearing down red dresses that were hanging to honour missing and murdered Indigenous women and girls.

She said the men made misogynistic remarks and said Indigenous peoples don’t have the right to “take back land wherever you want.”

According to Manuel, the scene turned violent, when one of the men assaulted a village resident who demanded that they leave.

“I had to flee from my truck into my home. They knew where I was because I was flashing my light out of my window telling them to leave my truck alone,” Manuel said.

She said that’s when one of the men went into her truck, where the keys were still in the ignition and drove into her home. The tiny houses, as they are called, are effectively trailers that have been converted into miniature homes. Manuel said a hitch on the corner of the trailer prevented the truck from causing serious damage, but she still felt the impact of the collision while she was inside. “They came right for me, full blast, with a big huge F-350,” Manuel said. “Who in their right mind would get into someone else’s truck and drive it into someone’s home?”

RCMP said the Clearwater, B.C. detachment is investigating the incident but could not provide further comment.

Manuel said the episode made her fear for her life.

“These men that came, they came really aggressively and they came with a lot of hate. … They didn’t come as night house guests for a party. They came to destroy and create fear,” Manuel said.

In a video Manuel posted to social media, the man Manuel said drove the truck into her home can be seen kneeling with his arms folded over his chest and smirking. Another man is standing next to him saying they are of Métis ancestry, which Manuel disputes.

In another video, Manuel recorded her truck, which appears to have collided with a light pole. She claims the man rammed the truck into the pole before leaving.

Manuel said she doesn’t have much faith or confidence in the RCMP, who she said have sided with industry groups in the past rather than activists. She said her encampment has been under surveillance by local police and that she has been arrested in the past for protesting.

“You’d think if they’re spending all this money on policing us, then they’d be able to find the people who are trying to kill us,” Manuel said.

Manuel’s social media post, in which she pleads for someone to identify the men if they recognize them, has received thousands of shares. She said she’s considering adding a reward.

Manuel said the incident will not discourage her from her activism.

“We’re not ever going to be strong-armed out of our home and land.” SOURCE

Omar Mosleh is an Edmonton-based reporter covering inner-city issues, affordable housing and reconciliation for the Star

Omar Mosleh is an Edmonton-based reporter covering inner-city issues, affordable housing and reconciliation for the Star

One thought on “Kanahus Manuel, a member of the group Tiny House Warriors, says a group of men attacked her protest encampment and drove a truck into her home while she was in it. CANADA ‘They came to destroy and create fear’: Indigenous protester says men attacked Trans Mountain protest camp”