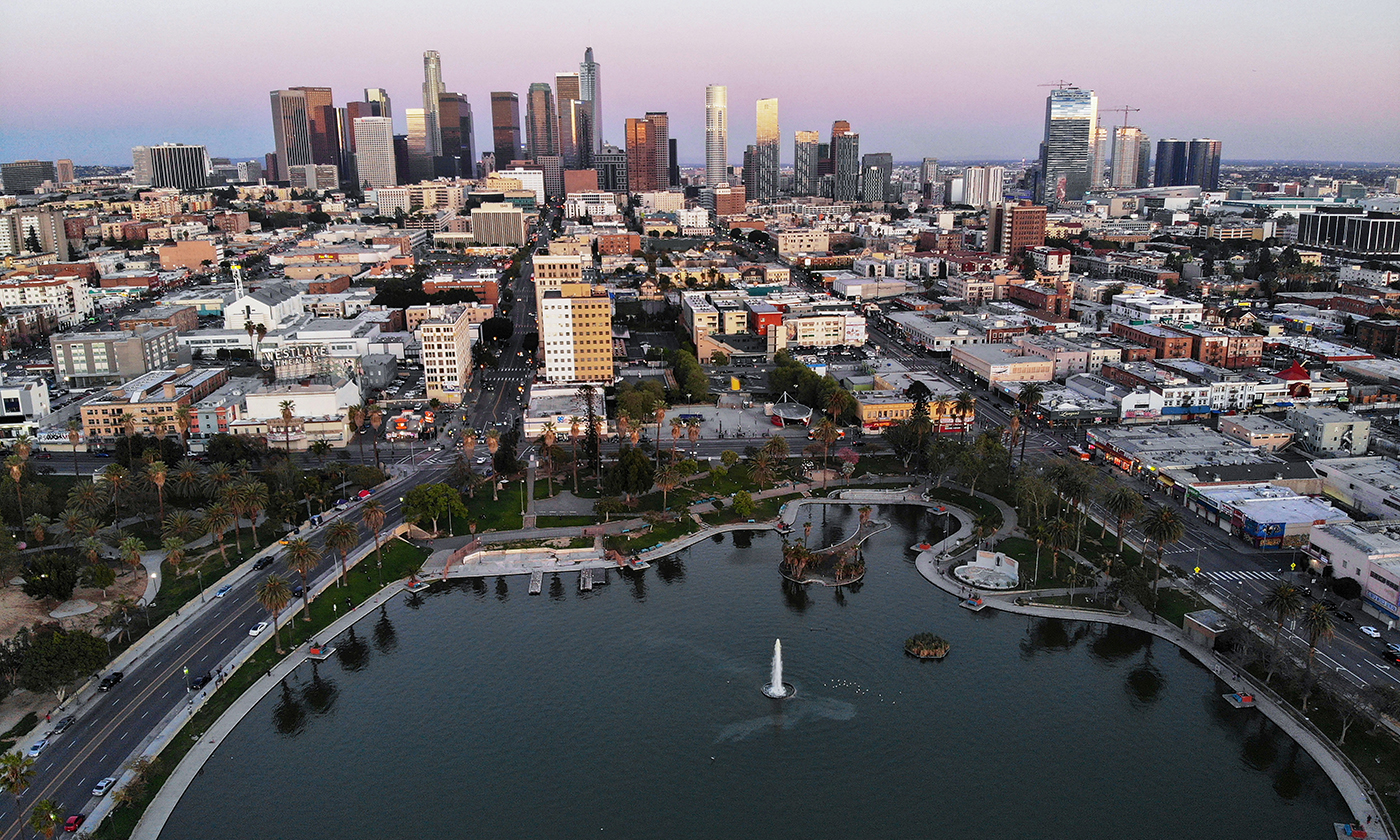 An aerial view shows MacArthur Park and downtown Los Angeles in the midst of the coronavirus pandemic on April 15, 2020. Data from the Environmental Protection Agency (EPA) from March show that Los Angeles had its longest stretch of air quality rated as “good” since 1995 as Safer-at-Home orders were issued in response to the spread of COVID-19. PHOTO BY MARIO TAMA/GETTY IMAGES

Simpler because our environmental troubles could be easily seen. The air above our cities was filthy, and the water in our lakes and streams was gross. There was nothing subtle about it. In New York City, the environmental lawyer Albert Butzel described a permanently yellow horizon: “I not only saw the pollution, I wiped it off my windowsills.” Or consider the testimony of a city medical examiner: “The person who spent his life in the Adirondacks has nice pink lungs. The city dweller’s are black as coal.” You’ve likely heard of Cleveland’s Cuyahoga River catching fire, but here’s how New York’s Gov. Nelson Rockefeller described the Hudson south of Albany: “one great septic tank that has been rendered nearly useless for water supply, for swimming, or to support the rich fish life that once abounded there.” Everything that people say about the air and water in China and India right now was said of America’s cities then.

No wonder people mobilized: 20 million Americans took to the streets for the first Earth Day in 1970—10 percent of America’s population at the time, perhaps the single greatest day of political protest in the country’s history. And it worked. Worked politically because Congress quickly passed the Clean Air Act and the Clean Water Act, and scientifically because those laws had the desired effect. In essence, they stuck enough filters on smokestacks, car exhausts, and factory effluent pipes that, before long, the air and water were unmistakably cleaner. The nascent Environmental Protection Agency commissioned a series of photos that showed just how filthy things were. Even for those of us who were alive then, it’s hard to imagine that we tolerated this.

But we should believe it, because now we face even greater challenges that we’re doing next to nothing about. And one reason is you can’t see them.

The carbon dioxide molecule is invisible; at today’s levels, you can’t see it or smell it, and it doesn’t do anything to you. Carbon with one oxygen molecule? That’s what kills you in a closed garage if you leave the car running. But two oxygen molecules? All that does is trap heat in the atmosphere. Melt ice caps. Raise seas. Change weather patterns. But slowly enough that most of the time, we don’t quite see it.

The divestment campaign that, over a decade, has enlisted $14 trillion in endowments and portfolios in the climate fight has a new head of steam.

And it’s a more complex moment for another reason. You can filter carbon monoxide easily. It’s a trace gas, a tiny percentage of what comes from a power plant. But carbon dioxide is the exact opposite. It’s most of what comes pouring out when you burn coal or gas or oil. There’s no catalytic converter for CO2, which means you have to take down the fossil fuel industry.

That in turn means you have to take on not just the oil companies but also the banks, asset managers, and insurance companies that invest in them (and may even own them, in the wake of the current economic crash). You have to take on, that is, the heart of global capital.

And so we are. Stop the Money Pipeline, a coalition of environmental and climate justice groups running from the small and specialized to the Sierra Club and Greenpeace, formed this past fall to try to tackle the biggest money on earth. Banks such as Chase—the planet’s largest by market capitalization—which has funneled a quarter-trillion dollars to the fossil fuel industry since the Paris Agreement of 2015. Insurers such as Liberty Mutual, still insuring tar sands projects even as pipeline builders endanger Native communities by trying to build the Keystone XL during a pandemic.

This campaign sounds quixotic, but it seemed to be getting traction until the coronavirus pandemic hit. In January, BlackRock announced that it was going to put climate at the heart of its investment analyses. Liberty Mutual, under similar pressure from activists, began to edge away from coal. And Chase—well, Earth Day would have seen activists engaging in civil disobedience in several thousand bank lobbies across America, sort of like the protest in January that helped launch the campaign (and sent me, among others, off in handcuffs). But we called that off; there’s no way we were going to risk carrying the microbe into jails, where the people already locked inside have little chance of social distancing.

Still, the pandemic may be causing as much trouble for the fossil fuel industry as our campaign hoped to. With the demand for oil cratering, it’s clear that these companies have no future. The divestment campaign that, over a decade, has enlisted $14 trillion in endowments and portfolios in the climate fight has a new head of steam.

Our job—a more complex one than faced our Earth Day predecessors 50 years ago—is to force the spring. We need to speed the transition to the solar panels and wind turbines that engineers have worked so mightily to improve and are now the cheapest way to generate power. The only thing standing in the way is the political power of the fossil fuel companies, on clear display as President Trump does everything in his power to preserve their dominance. That’s hard to overcome. Hard but simple. Just as in 1970, it demands unrelenting pressure from citizens. That pressure is coming. Indigenous nations, front-line communities, faith groups, climate scientists, and savvy investors are joining together, and their voices are getting louder. Seven million of us were in the streets this past September. That’s not 20 million, but it’s on the way.

We can’t be on the streets right now. So we’ll do what we can on the boulevards of the internet. Join us for Earth Day Live, three days of digital activism beginning April 22. We’re in a race, and we’re gaining fast. SOURCE

BILL MCKIBBEN is the Schumann Distinguished Scholar in Environmental Studies at Middlebury College, the founder of 350.org, and the winner of the 2014 Right Livelihood Award. He is a YES! contributing editor.