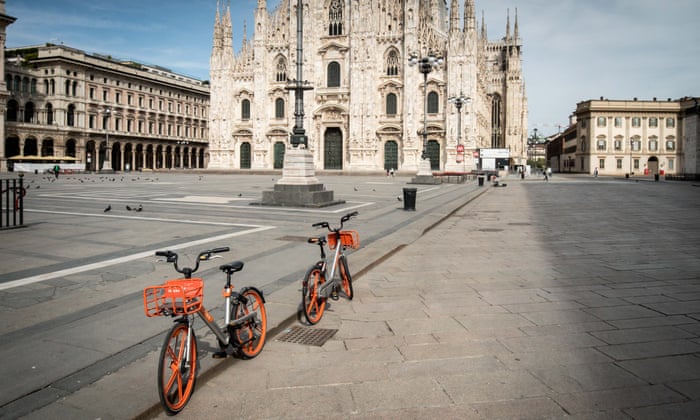 Milan is to introduce one of Europe’s most ambitious schemes reallocating street space from cars to cycling and walking, in response to the coronavirus crisis.

The northern Italian city and surrounding Lombardy region are among Europe’s most polluted, and have also been especially hard hit by the Covid-19 outbreak.

Under the nationwide lockdown, motor traffic congestion has dropped by 30-75%, and air pollution with it. City officials hope to fend off a resurgence in car use as residents return to work looking to avoid busy public transport.

The city has announced that 35km (22 miles) of streets will be transformed over the summer, with a rapid, experimental citywide expansion of cycling and walking space to protect residents as Covid-19 restrictions are lifted.

The Strade Aperte plan, announced on Tuesday, includes low-cost temporary cycle lanes, new and widened pavements, 30kph (20mph) speed limits, and pedestrian and cyclist priority streets. The locations include a low traffic neighbourhood on the site of the former Lazzaretto, a refuge for victims of plague epidemics in the 15th and 16th centuries.

“Of course, we want to reopen the economy, but we think we should do it on a different basis from before.

“We think we have to reimagine Milan in the new situation. We have to get ready; that’s why it’s so important to defend even a part of the economy, to support bars, artisans and restaurants. When it is over, the cities that still have this kind of economy will have an advantage, and Milan wants to be in that category.”

Milan is a small, dense city, 15km from end to end with 1.4 million inhabitants, 55% of whom use public transport to get to work. The average commute is less than 4km, making a switch from cars to active modes of travel potentially possible for many residents.

Work could start on an 8km stretch of Corso Buenos Aires, one of the city’s most important shopping streets, by the beginning of May – with a new cycle lane and expanded pavements. The remainder of the work will be completed by the end of the summer, officials say.

Janette Sadik-Khan, a former transportation commissioner for New York City, is working with cities including Bogota and Milan on their transport recovery programmes. She says Milan, which is a month ahead of other world cities in the trajectory of the pandemic, could provide a roadmap for others.

“A lot of cities and even countries have been defined by how they’ve responded to historical forces, whether it’s political, social, or physical reconstruction,” she says.

“The Milan plan is so important is because it lays out a good playbook for how you can reset your cities now. It’s a once-in-a-lifetime opportunity to take a fresh look at your streets and make sure that they are set to achieve the outcomes that we want to achieve: not just moving cars as fast as possible from point A to point B, but making it possible for everyone to get around safely.

“I know we’ll be looking to Milan for guidance from New York City.”

Pierfrancesco Maran, another of Milan’s deputy mayors, said: “We should accept that for months or maybe a year, there will be a new normality, and we have to create good conditions to live this new normality for everyone.

“I think in the next month in Milan, in Italy, in Europe, we will decide part of our future for the next decade. Before, we were planning for 2030; now the new phase, we are calling it 2020. Instead of thinking about the future, we have to think about the present.”

In the UK on Monday, Brighton started opening part of the seafront, Madeira Drive, only to pedestrians and cyclists from 8am-8pm. In Barnes, London, businesses and residents have coned off part of the road outside shopping parades to expand pedestrian space and help shoppers keep their distance from each other.

Meanwhile in the Republic of Ireland, Dublin is suspending loading bays and parking spaces to increase space for social distancing, by using removable plastic separators.