Canada’s “City of Gardens” is living up to its name in an unprecedented time. 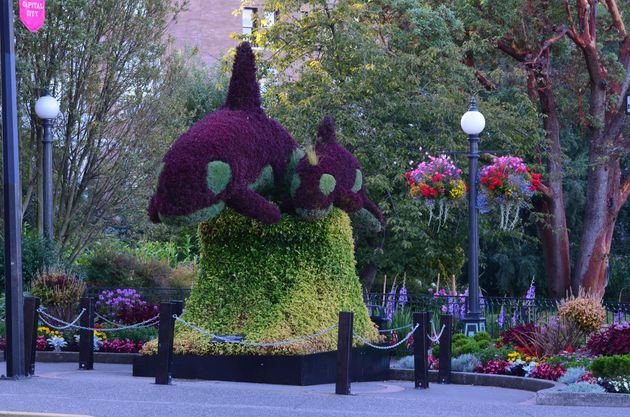 A photo of an orca-themed horticulture display taken in good weather in Victoria, B.C. CITY OF VICTORIA

OTTAWA — Growing season is on the horizon and Canada’s “City of Gardens” is planning for more plants to increase local food security amid the coronavirus pandemic.

City councillors in Victoria, B.C. passed a motion Thursday to expand an urban food production program by temporarily reassigning some parks department staff to grow 50,000 to 75,000 seedlings to give to residents in May and June.

“These are extraordinary times and they do call for extraordinary measures,” said Mayor Lisa Helps in the council meeting. She referenced city measures taken in the Great Depression when potatoes were grown in Beacon Hill Park for the orphanage and seniors’ homes.

“This is a little bit different in the 21st century, but I think it’s a small thing staff can do and the residents can do, working together,” Helps said.

Ornamental gardening, such for the city’s orca floral display, will continue. But the city will see a 20 per cent reduction in the number of decorative hanging baskets. Those resources being redirected to the food security project.

Loveday said the provincial government has reassured residents that supply chains are intact amid the coronavirus pandemic. But the severity of the situation has compelled him and some neighbours to be more proactive about gardening this year, he said.

“I do think this crisis has brought this into people’s minds a little bit more and that they want to have a little more of a hand in growing their own food.”

In the 1950s, Vancouver Island farmers were responsible for 85 per cent of the region’s food supply, according to the Capital Region Food and Agricultural Initiatives Roundtable. But by the early aughts, food imports had increased to 85 per cent.

City staff are currently in discussions with farmers and seed libraries to come up with a shortlist of easy-to-grow edible plants that would be ideal for home gardening. Loveday suggested kale and chard as examples of leafy greens that thrive in Victoria’s climate.

The seedlings are expected to grow in municipal nurseries and greenhouses until they’re ready for distribution. Residents will get some leaf mulch, compost, or wood chips along with some soil with their free plants. Educational resources, including instructions for novice gardeners, will also be provided.

With the province’s K-12 classes suspended in response to the novel coronavirus outbreak, city staff are also looking into livestreaming greenhouses tutorials to teach children, teens, and adults at home about gardening.

Lush boulevards, some with floral blooms and the occasional burst of edible greens, aren’t a strange sight in the West Coast city. That’s because the city’s bylaws were amended a few years ago to allow boulevard gardening on public land.

“We’ve been laying the groundwork for several years,” Coun. Ben Isitt said in an interview. The food-growing season in Canada is obviously short, he said, but the season is slightly longer on Vancouver Island because of its temperate climate.

Isitt worked with Loveday on the motion to increase “community resilience and food security.” He said the last time the city ramped up food production was the Second World War when supply was a concern coming out of the Great Depression.

“This will be the first time in about three-quarters of a century that the city gets directly involved in growing food,” Isitt said.

He said the current COVID-19 situation has prompted residents to take a renewed interest in how to build resilience in their communities in the face of a public health and economic crisis.

Mid-March panic buying saw flour, rice, pasta, and some canned goods cleared from grocery store shelves, Isitt said. “In the more wealthy neighbourhoods it seemed like produce was in short supply and that would be restocked but would be rapidly depleted.”

Because grassroots organizations have already been growing around community gardening, he said interest was already there and the motion received “huge” support from the public.

“I would encourage all communities to look at what they can do to make their communities more sustainable and more resilient for whatever challenges lie in the future.” SOURCE