Plants can learn, memorise information and communicate. Perhaps we humans are not as special as we would like to think 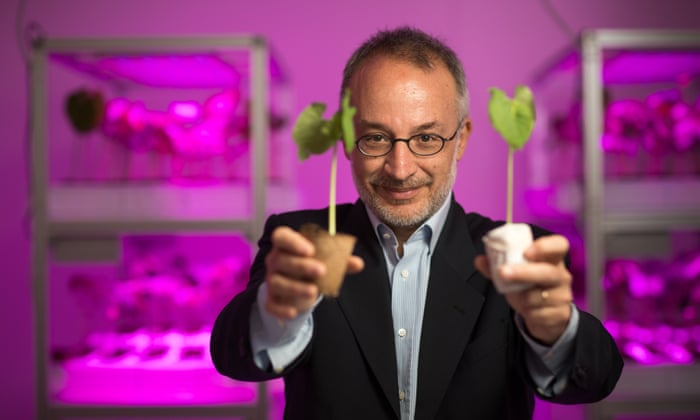 ‘You need to imagine a plant as a huge brain’ … the plant neurobiologist Stefano Mancuso. Photograph: Alessandro Moggi

Ihad hoped to interview the plant neurobiologist Stefano Mancuso at his laboratory at the University of Florence. I picture it as a botanical utopia: a place where flora is respected for its awareness and intelligence; where sensitive mimosa plants can demonstrate their long memories; and where humans are invited to learn how to be a better species by observing the behaviour of our verdant fellow organisms.

But because we are both on lockdown, we Skype from our homes. Instead of meeting his clever plants, I make do with admiring a pile of cannonball-like pods from an aquatic species, on the bookshelves behind him. “They’re used for propagation,” he says. “I am always collecting seeds.”

Before Mancuso’s lab started work in 2005, plant neurobiology was largely seen as a laughable concept. “We were interested in problems that were, until that moment, just related to animals, like intelligence and even behaviour,” he says. At the time, it was “almost forbidden” to talk about behaviour in plants. But “we study how plants are able to solve problems, how they memorise, how they communicate, how they have their social life and things like that”. 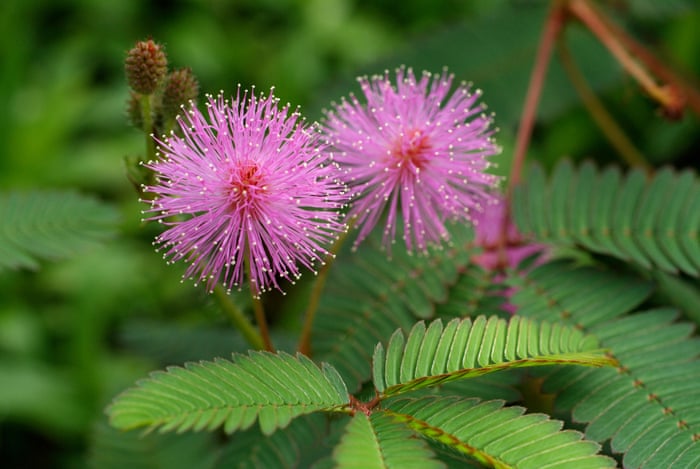 Mancuso and his colleagues have become experts in training plants, just like neuroscientists train lab rats. If you let a drop of water fall on a Mimosa pudica, its kneejerk response is to recoil its leaves, but, if you continue doing so, the plant will quickly cotton on that the water is harmless and stop reacting. The plants can hold on to this knowledge for weeks, even when their living conditions, such as lighting, are changed. “That was unexpected because we were thinking about very short memories, in the range of one or two days – the average memory of insects,” says Mancuso. “To find that plants were able to memorise for two months was a surprise.” Not least because they don’t have brains.

In a plant, a single brain would be a fatal flaw because they have evolved to be lunch. “Plants use a very different strategy,” says Mancuso. “They are very good at diffusing the same function all over the body.” You can remove 90% of a plant without killing it. “You need to imagine a plant as a huge brain. Maybe not as efficient as in the case of animals, but diffused everywhere.”

One of the most controversial aspects of Mancuso’s work is the idea of plant consciousness. As we learn more about animal and plant intelligence, not to mention human intelligence, the always-contentious term consciousness has become the subject of ever more heated scientific and philosophical debate. “Let’s use another term,” Mancuso suggests. “Consciousness is a little bit tricky in both our languages. Let’s talk about awareness. Plants are perfectly aware of themselves.” A simple example is when one plant overshadows another – the shaded plant will grow faster to reach the light. But when you look into the crown of a tree, all the shoots are heavily shaded. They do not grow fast because they know that they are shaded by part of themselves. “So they have a perfect image of themselves and of the outside,” says Mancuso.

When corn is nibbled by caterpillars, the plant emits a distress signal that lures parasitic wasps to exterminate them

Science struggles to view plants as active and motivated because its outlook is so humancentric, he argues. One test for self-awareness in animals is whether they can look in a mirror and understand that they are looking at themselves. “Very few animals are able to do this,” says Mancuso. “Humans, dolphins, a few apes and probably elephants. This has been taken in recent years as a kind of evidence that just these few groups of animals have self-awareness.” Mancuso believes this is wrong. “My personal opinion is that there is no life that is not aware of itself. For me, it’s impossible to imagine any form of life that is not able to be intelligent, to solve problems.”

Another misconception is that plants are the definition of a vegetative state – incommunicative and insensitive to what is around them. But Mancuso says plants are far more sensitive than animals. “And this is not an opinion. This is based on thousands of pieces of evidence. We know that a single root apex is able to detect at least 20 different chemical and physical parameters, many of which we are blind to.” There could be a tonne of cobalt or nickel under our feet, and we would have no idea, whereas “plants can sense a few milligrams in a huge amount of soil”, he says.

Far from being silent and passive, plants are social and communicative, above ground and beneath, through their roots and fungal networks. They are adept at detecting subtle electromagnetic fields generated by other life forms. They use chemicals and scents to warn each other of danger, deter predators and attract pollinating insects. When corn is nibbled by caterpillars, for example, the plant emits a chemical distress signal that lures parasitic wasps to exterminate the caterpillars.

Another reason we overlook plants’ intelligence is their vastly slower pace of life. In Mancuso’s new book, The Incredible Journey of Plants, we meet the world’s oldest plant – Old Tjikko – a red fir tree whose roots have writhed in the Swedish earth for about 9,560 years. We are also introduced to the ingenious seeds of crimson fountain grass, which choose not to germinate until the conditions are perfect – and can survive for six years while waiting.

The main thrust of the book is that plants were the original pioneers and have been forever exploring the planet. Mancuso eschews the notion of “native species” and prizes so-called invasive species above all else. “The more invasive they are, the more I like them, because they are the most brilliant example of the ability to solve problems,” he says. “Invasive species are the most beautiful plants that I can imagine.” For Mancuso, “migration is one of the most important forces of nature. All living organisms migrate. We are the only species that is not allowed to, and this is completely unnatural.”

Although new generations of botanists are increasingly embracing plant neurobiology, Mancuso still has his detractors. Last summer, a group of eight plant scientists wrote in the journal Trends in Plant Science that Mancuso and his colleagues “have consistently glossed over the unique and remarkable degree of structural, organisational and functional complexity that the animal brain had to evolve before consciousness could emerge”. Mancuso says that almost all of these botanists are retired. “It’s an older generation of plant scientists that is completely against any notion of a plant as intelligent or behaving. For them, plants are kind of a semi-living organic machine.”

All living organisms migrate. We are the only species that is not allowed to, and this is completely unnatural

The notion that humans are the apex of life on Earth is one of the most dangerous ideas around, says Mancuso: “When you feel yourself better than all the other humans or other living organisms, you start to use them. This is exactly what we’ve been doing. We felt ourselves as outside nature.” The average lifespan of a species on Earth is between 2m and 5m years. “Homo sapiens have lived just 300,000 years,” he says – and already “we have been able to almost destroy our environment. From this point of view, how can we say that we are better organisms?”

Perhaps we should try – ahem – taking a leaf out of the plant kingdom’s book. Human societies and organisations are structured like our bodies – with a brain, or a top-level control centre, and various different organs governing specific functions. “We use this in our universities, our companies, even our class divisions,” says Mancuso. This structure enables us to move fast, physically and organisationally, but it also leaves us vulnerable. If a major organ fails, it could scupper everything, and top-down leadership rarely serves the whole.

Plants, by contrast, “are kind of horizontal, diffusive, decentralised organisations that are much more in line with modernity”. Take the internet, the ultimate decentralised root system. “Look at the ability of Wikipedia to produce a wonderful amount of good-quality information by using a decentralised, diffused organisation. I’m claiming that, by studying plant networks, we can find wonderful solutions for us,” Or take the ethos of cooperation. Plants, say Mancuso, “are masters of starting symbiotic relationships with other organisms: bacteria, mushrooms, insects, even us. Just look at the way they use us to be transported all around the world.” We may think we have the upper hand, but plants may beg to differ. SOURCE