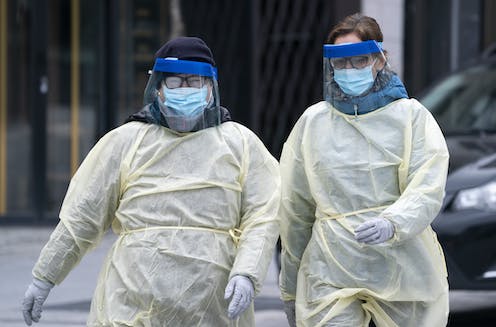 Two health-care workers arrive at a walk-in COVID-19 test clinic in Montréal on March 23, 2020. Unionized nurses are among those on the front lines of the coronavirus pandemic. THE CANADIAN

The COVID-19 pandemic and its economic fallout pose serious challenges for Canada’s workers.

Naomi Klein’s 2007 bestseller, The Shock Doctrine, documented how political and economic elites have exploited crises to advance an agenda of privatization and austerity.

In such moments, elites often take advantage of the public’s fear and uncertainty to push through changes that would normally be met with fierce opposition. With picket lines and large demonstrations out of the question in this time of social distancing and self-isolation, unions are especially vulnerable.

Some Canadian employers have already used this moment of crisis to turn the screws on union members.

In Québec, Premier Francois Legault used the pretext of COVID-19 to unilaterally suspend key provisions in collective agreements with the province’s teachers’ unions.

In Saskatchewan, a bitter and prolonged lockout over pension contributions was extended after the Co-op Refinery pointed to COVID-19 as cause for rejecting the terms of settlement proposed by a widely respected independent mediator.

In Ontario, after weeks of rotating strikes were cut short by the pandemic, some teachers’ unions have quietly reached tentative settlements with the province, presumably in an effort to avoid deeper cuts in the future.

Gains will likely be rolled back

Fortunately, some employers, like select grocery chains, have temporarily increased wages in response to COVID-19. Over the long term, however, businesses are likely to use the economic fallout from the pandemic as a pretext for rolling back those gains and demanding unprecedented concessions from their employees.

Moving forward, unions are likely to find it incredibly difficult to negotiate gains for their members who will be expected to “share the pain” of an economic recession not of their making.

Public sector workers will also become targets. After governments bailed out select corporations during the 2008 financial crisis, they turned to taxpayers to foot the bill and demanded that health care, education and social service workers did more with less. We can expect a similar dynamic in the years to come.

We should expect some employers and governments to take advantage of the pandemic and its economic fallout by casting unions as selfish for trying to defend the interests of their members. Unions, however, have an unprecedented opportunity to turn that well-worn narrative on its head.

Unions can and must become champions of converting new temporary income supports, social protections and employment standards into permanent measures designed to rebuild Canada’s tattered social safety net. This approach will demonstrate that unions are fighting for the common good rather than simply for the welfare of their members.

Unions should also call on their members to oppose bailouts of big corporations that don’t also bail out workers and give employees more say over how industries deemed “too big to fail” are run.

In this way, unions can demonstrate the important role they play in ensuring that governments prioritize everyday people over corporate executives.

Finally, unions must continue to lead the resistance to service cuts and demands to privatize health-care services. Why? Because the COVID-19 pandemic is a prime example of why Canada needs a strong and expanded public health-care system.

But it’s worth remembering that the strength of our collective response to COVID-19 is in part shaped by the strength and resiliency of union members who labour every day to help us overcome the pandemic. Nurses, cleaners, grocery store clerks and other unionized workers have been on the front lines of this fight. They should emerge from it with a greater level of respect.

Unions, in their continued defence of decent jobs and expanded services, play a key role in promoting the public good. They play this role by acting as a critical counterweight to the power of economic elites who have always prioritized profits over people.

While some elites will no doubt try to use this crisis as a pretext to push for privatization and austerity, unions must be a strong voice in defence of public services and social investments. SOURCE