If there is an economic alternative now, there was one before – and we are all suffering from the failure to take it 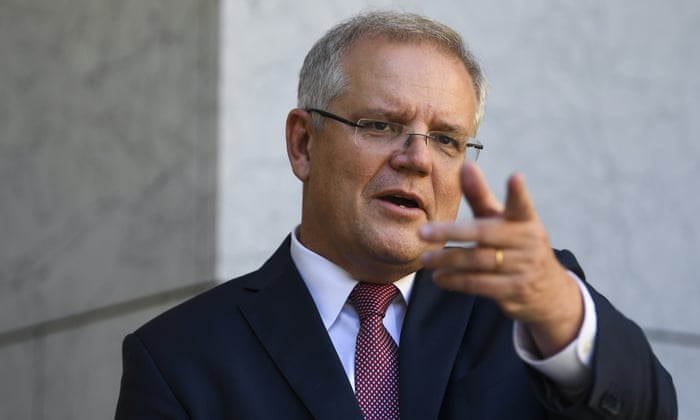 ‘Scott Morrison’s administration has, almost overnight, delivered one of the largest boosts to benefits in Australian history.’ Photograph: Lukas Coch/AAP

Think about Tina: the acronym popularised after Margaret Thatcher declared that “There is no alternative” to the market economy.

From the 1980s on, a thoroughgoing and overt commitment to capitalism became fundamental to every mainstream political party.

Well, if Tina was a person, you’d find her today languishing in an overcrowded ICU, as, all around, the coronavirus forces a recognition of the alternatives always available.

A few months later, his administration announced it would pay the wages of all those who had lost their jobs, a plan that the chancellor of the exchequer Rishi Sunak correctly described as “unprecedented in British history”. Meanwhile, as Owen Jones notes, ConservativeHome now demands “Big State Government on a scale unknown in modern times”, while pundits in the right-leaning Spectator urge Johnson to “borrow from Corbyn’s playbook”.

Across the Atlantic, the New York governor, Andrew Cuomo, was not so long ago inflicting market-driven cuts on medical services for the vulnerable.

But, with New York a centre of infection, Cuomo is – rhetorically, at least –currently out-Sandering Bernie Sanders: decrying competition between manufacturers of masks, gowns and other medical supplies as inefficient and wasteful, and urging the nationalisation of factories to distribute goods according to need.

Likewise, Scott Morrison’s administration has, almost overnight, delivered one of the largest boosts to benefits in Australian history, with “Scotty from Marketing” effectively doubling the rate of jobseeker payments.

How, you might wonder, was a dole judged too low to feed and house those laid off during the pandemic considered adequate in July last year, when Morrison decried a boost to Newstart as “unfunded empathy”?

The question illustrates the problem with the Damascene ideological conversions taking place all around us: namely, that they’re too little, too late.

After all, if welfare hadn’t been such a whipping boy for politicians for decades, something might have been done to fix the decrepit Centrelink website so that it didn’t crash right when people needed it most.

If Australia had invested in a decent public broadband system back when the economy was growing, those of us now working from home wouldn’t be dealing with stuttering, buffering video links.

If the Fair Work Act hadn’t been systematically weighted in the interests of capital, companies such as Qantas wouldn’t be able to respond to coronavirus by standing down employees without pay. More generally, if successive governments hadn’t sold off the plum state-owned assets, the government might now have more options for cushioning current pain.

One could go on but you get the idea: the failures of today stem from the choices of the past.

Now, we can’t step back in time. But we can change what happens next.

The Covid-19 catastrophe demonstrates – if any demonstration is needed – that prevention is better than cure. It shows that scientific experts know, by and large, what they’re talking about, and that their modelling accurately predicts real world effects.

The implications for climate change could not be more obvious.

Scientists have told us, over and over again, that a warming planet will deliver increasingly horrific disasters, with the recent Australian bushfires a taste of what’s to come.

After the last weeks, it’s simply not credible to say nothing can be done about the rising temperatures. We don’t have to wait for some market mechanism to sort things out.

Other alternatives exist – and the sooner we embrace them, the less disruption we face.

In the end, ideology matters less than material interest. The politicians currently buffeted by extraordinary events will, quite soon, recover their equilibrium – and, when they do, we should expect a return to the old rhetoric, as the big end of town insists the rest of us pay for what’s happened.

Indeed, the economic devastation will be used to justify more of the same indifference to the threats of the future, with climate action dismissed as a job-killing indulgence in a time of mass unemployment.

But it doesn’t have to be like that. We have a chance to build from the wreckage – to learn from this crisis and prevent the crisis we know is coming.

If we don’t, it will all happen again. SOURCE