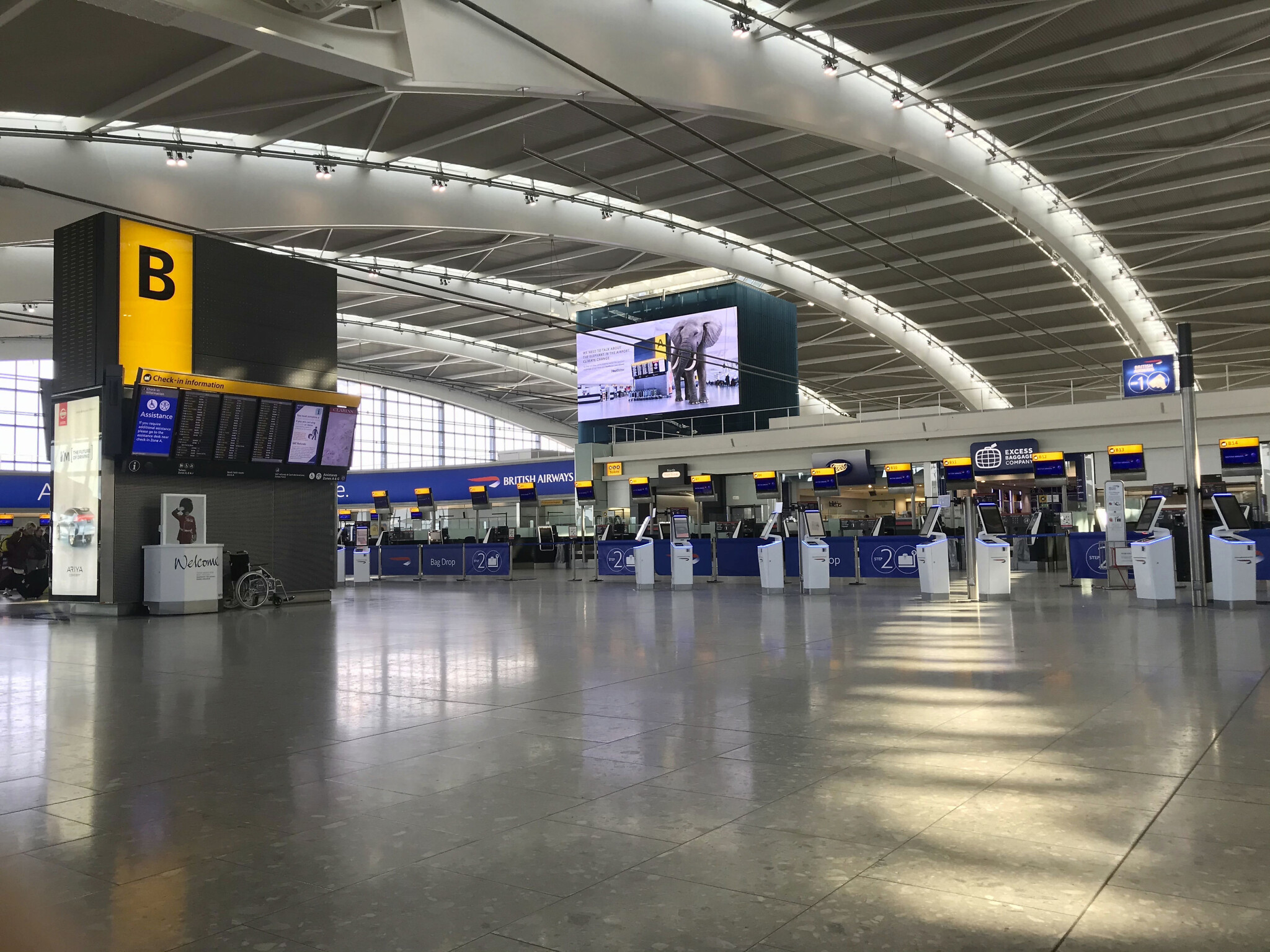 A view of the near empty departure area at London’s Heathrow Airport’s Terminal 5 departure, March 12, 2020 (Steve Parsons/PA via AP)

The human tragedy of the coronavirus is immense. Thousands have died, hundreds of thousands have been infected globally, and millions more have been affected. Whilst infectious disease has always been a part of the human experience, the expansion of industrial civilization has inexorably amplified the risk of new diseases.

Uncontrolled industrial expansion also dangerously heats the planet and drives the collapse of ecosystems worldwide. Experts like Professor Jem Bendell and philosopher Rupert Read have argued that societal collapse is near inevitable and that up to 6 billion people could die. Dr Nafeez Ahmed argues the collapse of civilization may have already begun. That human civilization itself is at risk is an increasingly accepted reality of our times. More than 11,000 scientists from 153 countries have declared a climate emergency warning:  “chain reactions could cause significant disruptions to ecosystems, society, and economies, potentially making large areas of Earth uninhabitable”

Coronavirus is both a symptom of the problematic globalized economy and an important signal that things need to change. Emergency short-term measures to contain the virus also have a positive impact on decimated global ecosystems. Crisis can be an opportunity and adopting some of these measures in perpetuity could help to avert the worst case runaway climate scenarios and help to maintain the planetary conditions that humanity is adapted to.  Here are five ways the pandemic could actually help us survive the ecological crisis:

1. Demonstrating that a less industrial future is feasible

Currently, a slowing economy is a lower-carbon economy. In China, coronavirus slowed industrial production, prompted longer holidays and led to the introduction of travel restrictions, all of which resulted in lower CO2 emissions: China’s emissions alone are down by a quarter, or 100 million metric tons. The decrease in output means less material is being shipped across the world, and less disposable products are ending up in landfills.

The sort of precipitous and unmanaged decline coronavirus has forced on global economies can devastate people’s livelihoods and living standards. However it is possible to implement such measures in a steady way, and forge societies less dependent on industrial production that not only protect livelihoods but simultaneously increase citizens’ well-being. This is what economists and sustainability experts call degrowth: a ‘phase of planned and equitable economic contraction in the richest nations eventually reaching a steady state that operates within Earth’s biophysical limits.’

While coronavirus has resulted in a very sudden scale-down in industrial production due to a public health emergency, living through this spasm may allow citizens to imagine, and policy-makers to plan, how it is possible to live differently in response to the ecological emergency. Reducing economic activity and industrial output is a means to enable global ecosystems to regenerate.

2. Driving a massive contraction in demand for cruises and aviation

With the Diamond Princess now as synonymous with the virus as Wuhan province, the last place people are dreaming of being right now is on a cruise ship, and bookings for the $45 billion a year cruise industry are down 40%.

Cruise ships emit extreme pollution in some of the world’s most beloved and fragile ecosystems such as the arctic, Caribbean Sea and Galapagos Islands. Burning the world’s dirtiest oil (bunker fuel) they pollute the air and cause sickness among coastline communities. The European fleet of the world’s single biggest cruise company, Carnival Corporation, emits 10 times more SOx air pollution along Europe’s coasts than all of Europe’s cars.

Until these giant corporations address their impacts a drop in bookings for this monstrously polluting sector can only be a good thing for planet earth.

Similarly, air travel is down due to coronavirus, declining for the first time since 2009 with an estimated cost to airlines of $113 billion in lost revenue. Campaigners have been calling for limits to air travel for years highlighting the sector’s massive and increasing climate impact. It seems that the coronavirus is driving the sort of reduction in air travel that lawmakers and the industry itself have thus far failed to enforce. In the face of a climate emergency and political dithering, an overall reduction in unnecessary travel could promote shifts to the enhanced local economies that may help avoid the most dangerous runaway climate models.

More and more of us live in cities and eat food that has been industrially-produced elsewhere and trucked, flown or shipped in using fossil fuels. Intensive food production and perpetual long-distance shipping makes the spread of disease more likely. Furthermore, the loss of nature and spread of monocultures enable disease pathogens to thrive. A shock such as coronavirus or surges in oil price reveals just how precarious the globalized economy on which many of us depend is. For example, if fuel supplies are interrupted, London will run out of food within days. Tim Lang, a Professor of Food Policy says, “It is all on the motorway. We have a just-in-time system of food.”

Massively boosting local food production slashes fossil-fuel emissions and reduces our dependence on this complex and precarious flow of global trade. What’s more, it will make us radically happier too. Our current economic system, which maximizes how much we all work and consume, has failed to translate into a rise in wellbeing: instead it has created a raft of new afflictions, running from obesity and eating disorders through to depression and a suicide epidemic in young men.

A future sustainable society would mean most of us working and commuting less, being more involved in our local communities and growing food near to where we live, with more time with our friends and families – all things found to increase human happiness. Helena Norberg-Hodge the director and founder of Local Futures said:

“By shifting towards more localized, diversified food economies around the world, we’d not only reduce the risk of diseases infecting our food supply, but we’d also keep more wealth within communities instead of siphoning it away to multinational corporations. We’d be providing livelihoods for people who are getting squeezed out of jobs by the mania for mechanizing and centralizing food production. And we’d be pushing back against the climate crisis as well, by reducing the need for fossil fuel-powered global supply chains to get our monocrops from place to place. Local food economies are a win-win from every angle.”

4. Ending the trade in wild animals

The calamitous decline of wild species is at least as great a threat to human survival as the climate emergency. Every species that goes extinct is an irreplaceable loss. In January this year, China banned the wildlife trade nationwide in markets, supermarkets, restaurants, and e-commerce platforms due to the coronavirus outbreak. In a joint statement, the country’s market watchdog, agricultural ministry, and forestry bureau also said any places that breed wildlife should be isolated, and the transportation of wildlife should be banned.

It is widely reported that the outbreak of Covid-19 may have started in a wild animal market in Wuhan. Pangolins, in particular, have been proposed as a possible host of the virus before it jumped to people via bats. Pangolins or scaly anteaters are extraordinary animals – the only mammals with scales. They are also the most trafficked creatures in the world, mainly for use in Chinese traditional medicine. As with the rhino horn, their scales are believed to have medicinal properties. They don’t. Banning the wildlife trade could put a brake on the relentless and pointless persecution of these animals allowing them to recover from the brink of extinction.

5. Highlighting the horrors of factory farming

Factory farms, which raise billions of animals per year in squalid, cramped and unhygienic conditions, are ideal breeding grounds for infectious diseases. The deadly 2009 swine flu pandemic sprang out of a massive pig farm in Veracruz, Mexico, where hundreds of pigs died in an outbreak that eventually moved into people.

“Intensively farmed animals live in crowded, barren conditions deprived of even the most basic natural behaviors. Given the number of animals involved and their lifelong suffering, factory farming is one of the biggest causes of animal cruelty on the planet. And not only does it harm animals – it hurts the natural world and us too.”

Wendy Orent, the author of “Plague: The Mysterious Past and Terrifying Future of the World’s Most Dangerous Disease” writes:

“If we want to forestall the evolution of ever-newer, and possibly deadlier, human-adapted viruses, live animal markets must be permanently shut down… until factory farms housing millions of animals are eliminated, until we take the inevitable logic of disease evolution into account, novel, and potentially deadly, human diseases will continue to arise. Again. And again. And again.”

Factory farmed animals are fed feed grown in the habitats of the world’s last wild animals such as the Amazon rainforest. Factory farming animals is increasingly seen by scientists, health experts and ethical commentators as an abomination that has to be stopped.

The best way to prevent pandemics and avoid the scale human suffering we are seeing unfold in the world due to coronavirus is not self-isolation, handwashing or facemasks, but the jettisoning of our moribund economic, food and transport systems, and replacing them with structures that put nature and planet first. A world where factory farming and wildlife trade is outlawed. Where economic growth is not pursued at all costs, where our capacity to feed ourselves from one day to the next is in our own hands, rather than those of gigantic polluting multinational corporations.

Coronavirus and the ecological crisis are linked symptoms of an unjust and unsustainable global system. Steps we can take to prevent another coronavirus spreading are the same steps we need to take to tackle the ecological emergency: to live more locally, with due respect for our biosphere’s limits and reverence for the precious wild creatures within it. Overall, this virus may be an important signal that human health cannot be treated independently from the health of the natural world; the two are inextricably linked.

Human civilization can protect itself from future shocks and become more resilient by shifting to become more in tune with the natural world it is a part of. Degrowing the global economy, regenerating natural systems and ending the systematic mistreatment of animals are key.