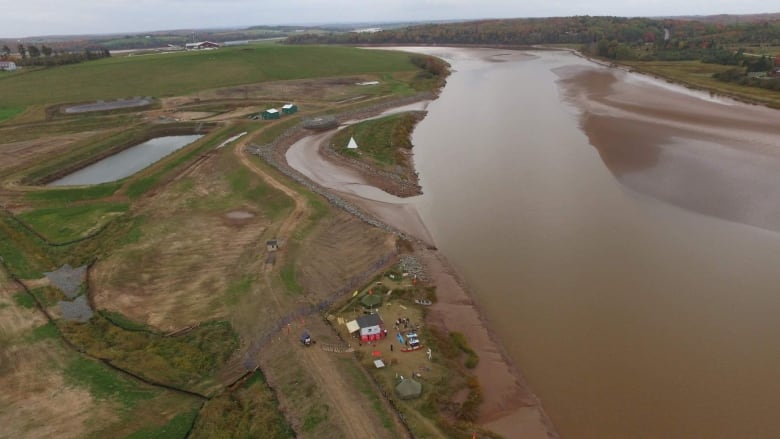 Before Alton Gas can proceed with its proposed natural gas storage facility near the Shubenacadie River, the province must resume consultation with Sipekne’katik First Nation for 120 days. (Shawn Maloney)

Justice Frank Edwards released his decision Tuesday, writing that former Nova Scotia environment minister Margaret Miller was wrong when she concluded the province had adequately consulted with the First Nation about the project.

He ordered the parties to resume talks for 120 days, “or for such time as the parties mutually agree,” but gave some leniency on a start date because of the ongoing coronavirus outbreak. The parties could wait until the province’s chief medical officer of health declares the crisis is over, or agree on an “alternative remote arrangement.”

Sipekne’katik had challenged in court Miller’s 2016 decision to grant industrial approval to Alton Gas, a subsidiary of Calgary-based energy company AltaGas, for a proposal to store up to 10 billion cubic feet of natural gas in underground caverns.

The Alton Gas project would create the caverns by using water from the Shubenacadie River to flush out nearby natural salt deposits.

Sipekne’katik had appealed the decision once before, and the judge found some procedural unfairness in the province’s process. But Miller later upheld her decision, leading to the latest appeal.

Lawyers for the province, the band and Alton Gas made their arguments for the judicial review hearing in Nova Scotia Supreme Court at a two-day hearing in February.

The focus of the review was the Crown’s duty to consult with Indigenous peoples on matters that could affect their treaty and Aboriginal rights, as laid out in Canada’s Constitution Act.

Ray Larkin, the lawyer representing Sipekne’katik First Nation, told the court there was no “depth” to the province’s consultation with the band over the Alton Gas project.

Sean Foreman, the lawyer for the government, said the province upheld its duty to consult and any perceived failure was the result of an “uncooperative” approach from the band. He said the judicial review should be dismissed.

At that time, Miller said consultation with the band had been sufficient.

“The Minister’s decision was not supported by the evidence,” Edwards wrote in his decision.

“While there had been extensive consultations regarding the potential environmental impacts of the Project, the core issue of Aboriginal title and treaty rights was never specifically engaged. The Minister therefore committed palpable and overriding error when she concluded that the level of consultation was appropriate.

“I also found that, but for her misapprehension of the evidence, the Minister would have concluded otherwise.”

Larkin argued at the hearing that Sipekne’katik has a legitimate Aboriginal title claim to the land and water that is proposed to be used for the Alton Gas project, which warrants “deep” consultation on the project.

In his decision, Edwards noted that deep consultation is not defined by case law and therefore varies by the circumstances. In this case, Edwards said, the strength of the asserted title claim would be an important factor.

“The Project is a significant industrial intrusion on an area the Band is claiming as its own. Massive amounts of salty brine will be pumped into the Shubenacadie River,” he wrote.

While studies and research indicate “minimal” environmental impacts, Edwards said, the full effects will remain unclear until the project is operational.

Edwards said it will be “vital” for the parties to discuss the strength of the claim.

“The Band still does not know what the Province thinks of the strength of its title claim. To restart the consultation the Province must remedy that deficiency,” he wrote.

Edwards said the province can no longer give a preliminary assessment of the title claim, but must give a tentative assessment, and give the band the opportunity to respond.

In a phone interview Tuesday, Larkin told CBC News band members do not agree on what they want to see happen with the Alton Gas project.

Larkin said he had not spoken with his client since the decision was released. Sipekne’katik Chief Mike Sack did not respond to an interview request.

A spokesperson for the Department of Environment said the province takes the duty to consult “very seriously” and was preparing to start a virtual consultation process immediately.

Although the duty to consult rests entirely with the province, Alton Gas has participated in past consultations and presented arguments at the judicial review.

In a written statement after Edwards released his decision, Alton Gas said it “remains committed to ongoing, open dialogue with the Mi’kmaq of Nova Scotia including Sipekne’katik about the Alton Project.”

‘Back to the drawing board’

Larkin said he thinks the decision will shape the way the province consults with First Nations on future industrial approvals.

“I think what this decision points to is the province needs to go back to the drawing board and have a stronger commitment to making consultation on Aboriginal treaty rights effective,” Larkin said. SOURCE