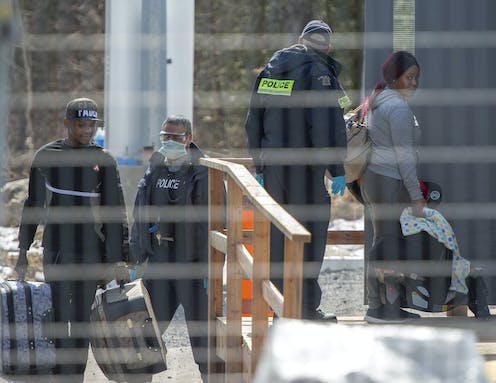 Asylum seekers cross the border from New York into Canada on March 18 at Hemmingford, Que., two days before Canada said it would now send those seeking asylum back to the U.S. THE CANADIAN PRESS/Ryan Remiorz

The dangers to public health during the COVID-19 pandemic are terrifying, so it’s not surprising governments around the world are taking extraordinary measures to curb its spread, including closing borders to non-nationals.

Canada has become one of many countries to either partially or completely close their borders and Prime Minister Justin Trudeau has also announced that Canada will no longer consider asylum claims.

We are living through an exceptional situation and governments are taking extreme steps as a result. At the same time, we know extraordinary measures can have enduring and profoundly damaging effects.

In Canada, the War Measures Act, the predecessor to the Emergencies Act (the legislation that Trudeau has considered invoking as part of the government’s response to the pandemic), was used on three occasions: during the First World War, the Second World War and the 1970 FLQ Crisis in Québec. On each of these occasions, there was broad support for its enactment and then subsequent concern about the scope of its application.

During the First World War, 8,579 “enemy aliens” were interned  — the term referred to citizens of countries that were at war with Canada who resided in Canada — as well as hundreds of conscientious objectors.

During the FLQ crisis following the kidnappings of British diplomat James Cross and Québec cabinet minister and deputy premier Pierre Laporte, the military and police conducted 3,000 searches, detained 497 people, including Québec nationalists and labour activists, in the pursuit of suspected accomplices. Only 62 people were ever criminally charged.

The fallout from all of these excesses was tangible: Ukrainian Canadians, who made up the bulk of the “enemy aliens” in the First World War, fought for decades to be recognized as full citizens; Japanese Canadians sought and received redress more than four decades after their internment; René Levesque and the Parti Québecois roared to power just six years after the FLQ crisis and very nearly achieved the separatist dream of an independent Québec in 1980.

And so with great power, comes great responsibility.

This old adage is all the more relevant if one considers the way many of the travel bans have been instituted along national lines: allowing citizens to move but restricting the movement of others.

Citizenship can be exclusionary

In efforts to combat the spread of COVID-19, lines of responsibility and accountability are being forcefully drawn around the lines of citizenship. This is troubling if one considers that citizenship can be exclusionary, especially when it creates hierarchies of priority and, seemingly, of human value.

It means, for instance, refugees and unaccompanied minors have been “effectively abandoned,” according to NGO workers in Europe.

Canada has won international praise over the last few years for its commitment to refugee resettlement in particular, as evidenced by the arrival of 25,000 Syrian refugees in a few short months.

But Trudeau has announced that due to these “exceptional times,” a new agreement has been signed with the United States that would see asylum-seekers crossing the border on foot returned to the U.S. This exceptional reaction goes against Canada’s commitments under the 1951 United Nations Convention Relating to the Status of Refugees and a 1985 Supreme Court ruling that says refugee claimants have a right to a fair hearing (the Singh decision).

The implicit and explicit nationalism apparent in many state responses to COVID-19, including in the Canadian context, is not necessarily “contrary to our values” as some have argued.

Rather, some of Canada’s earliest restrictions on migration and mobility related to people who were “physically defective,” “feeble-minded” or “afflicted with any loathsome disease” to use the language of the 1910 Immigration Act. This same act effectively prohibited Black migration to Canada from the United States and the Caribbean on the basis of that they were “unsuited to the climate or requirements of Canada.”

A ban on Chinese immigration

Prior to that, the federal government used immigration laws in the forms of punitive taxes to exclude Chinese migrants who were considered undesirable, in part because of commonly held stereotypes that people from China were immoral, dishonest, unclean, disease-prone and would never assimilate. These perceived differences and the ineffectiveness of the original head tax led to a near total ban on Chinese migration from 1923 to 1947.

Structurally, Canada’s immigration system — and its subsequent and related border controls — was designed to exclude as much as to include. This remains the case today.

As we navigate our current public health issues, it bears contemplation not only about immediate challenges but also what will come after.

During the pandemic, there have been many disturbing stories of Asian Canadians being targeted and harassed because of racist perceptions about who they are and where they come from — a situation compounded by U.S. President Donald Trump’s deliberate, nationalistic and racist insistence to give the coronavirus an ethnic and geographic association.

It is notable that this violence has been directed at people of Asian descent, even though the disease has been spread by travellers of many different ethnicities. This difference reflects the easy associations of otherness of the kind that shaped foundational exclusionary immigration laws and regulations and, apparently, continue to resonate in the present.

This is an easy moment to draw lines between us and them, to talk about “our neighbours” and “foreign travellers” as though they are not one and the same. But the long-term damage could be very great, particularly for racialized and vulnerable communities that have experienced the impact of exclusionary migration measures historically.

The decision to close the border to refugees is bitterly ironic in light of Trudeau’s 2018 official apology for the Canadian government’s exclusion in 1939 of Jewish refugees aboard the MS St. Louis.

The past and the future should be part of our thinking in the present. And to be clear, now is no time for nationalism. SOURCE