Native communities do not hurt the economy – they bear the hurt of corporations ruining the land. 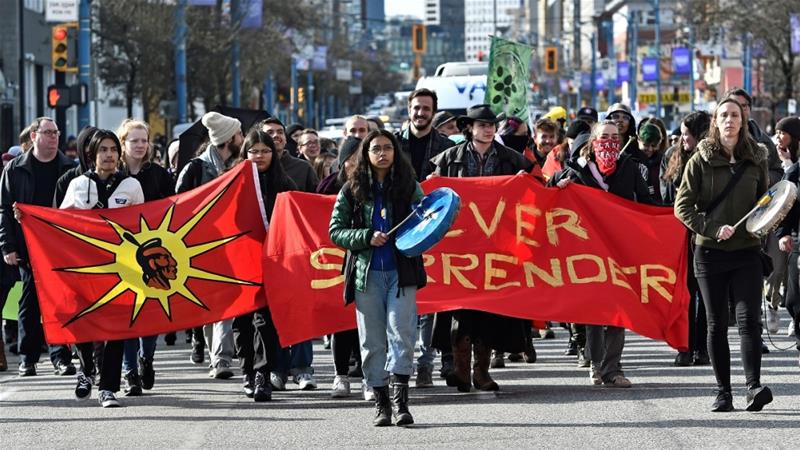 It is all well and good until the Indian mascots start talking back.

That has been an observation of mine, after years of public advocacy as a Native woman. Society likes us in caricatured form, they sometimes like us in regalia opening events, but once a Native speaks out in a way that challenges North American society, we are regularly, and sometimes violently, silenced.

We need look no further for an example of this than the current Indigenous-led infrastructure shutdowns in Canada, in solidarity with the Wet’suwet’en hereditary chiefs, who have refused passage of the Coastal GasLink pipeline through their territory.

Across what is now Canada, Native resistance is exposing an underbelly of racism, ignorance and historical denial. Following the Canadian government’s refusal to listen to the hereditary Wet’suwet’en chiefs’ rejection of the Coastal GasLink pipeline, hundreds of ongoing disruptions to transportation infrastructure have forced a reckoning on every level imaginable. Angry comments proliferate across online comment boards, death threats fill the inboxes of Native front-line resistors posting photos of solidarity actions with #WetsuwetenStrong and #LandBack hashtags.

Angry fossil fuel employees, their families, friends and citizens, concerned with economic security (but apparently not at all concerned with equality) call for violence upon Indigenous youth standing up for their long-suffering people, upon any and all Native peoples disrupting infrastructure trying to be heard, to be seen, to be respected.

“Yes, this is [a] threat,” I read in one Tweet replying to the Twitter feed of the Unist’ot’en (working in conjunction with the Wet’suwet’en hereditary chiefs) Camp, along with instructions and an illustration for locating and approaching Indigenous blockades with a mask and baseball bat.

Hostility to Native resistance ranges from physical violence to basic supremacy themes – people who “live off our taxes” have no room to complain about anything. The incalculable contributions Native people made to both non-Native survival then and to the economy as it exists today are summarily disregarded. I suspect a vast majority of North America has little to no understanding of treaties made between fledgeling Western governments and Native Nations, or of what “unceded land” means.

While the US and Canadian constitutions are respected law, the treaties that literally ceded the lands those countries exist on today in exchange for basic services ensuring the survival of the people holding those lands are viewed as old news, as something to “get over”.

The desperate state of far too many Native nations should anger any patriot who believes in country; a glaring failure of the US and Canada to uphold their end of the contracts they signed. Instead, Native communities are a source of shame, of anger towards Native people, or intentionally ignored. The refusal of Native peoples to assimilate is a 500-plus year thorn in the side of colonisation and an affront to American exceptionalism.

The racism on display with regard to Wet’suwet’en is not a new phenomenon. It did not just suddenly appear because of incendiary stories about job layoffs (layoffs that were already in progress before the disruptions).

I recall how a group of men driving by an Anishinaabe woman walking down a pavement in Thunder Bay, Canada, allegedly threw a trailer hitch at her and struck her in the stomach. Barbara Kentner, 34, later died of her injuries. The man charged with her killing faces trial in April. Internet rumours attacking Barbara Kentner grew so malicious that the Canadian Broadcasting Corporation (CBC) ran a piece debunking one claiming Kentner assaulted a child. The celebrations around the killing of Colton Boushie – a young Cree man shot in the head by a white farmer who was subsequently acquitted of his murder and manslaughter – was another moment that should have cued folks to the deep-seated racism towards Native people. So is the literal epidemic of missing and murdered Indigenous women on both sides of the colonial border.

Throw in extractive industrial projects that hold the boon of hundreds of well-paying jobs, a way to keep food on the table, and that ignorance explodes to the surface. The Native person trying to protect their land, the deepest part of their identity, becomes an obstacle blocking a good job. Such a narrative benefits the company seeking its latest fossil fuel project. Stories of Coastal GasLink pipeline, Enbridge, TransCanada and many others’ failing profit margins, uncertain oil forecasts and lack of demand are buried. It has to be somebody’s fault, we are told, but it never seems to be the companies making these destructive choices.

I was born and raised in North Country; I grew up with loggers and miners, the folks who use their hands and backs for a living, as my family members and neighbours. Distrust and lack of understanding between rural communities and the Native folks nearby are a constant. Exploitation of the lands and waters we call home is also a constant. The jobs that pay well are usually jobs that require taking far, far more than we need, for shipment somewhere else.

When the mine finally gives out, it is our water that sits contaminated, our children that play on the soil with a spreading chemical plume below it. When the old growth timber is gone, it is our ecosystem that is disrupted, the wild game many of us still depend on that disappears. We bear the risk of spills, of explosions, of all the immediate risks of bodily harm associated with extractive industry. When Coastal GasLink bulldozes its way through the unceded territory against the authority of the Wet’suwet’en hereditary chiefs, it is our communities that bear that hurt and destruction, it is our people, our youth that carry those wounds and further separation between Native and non-Native neighbours.

We are at the point now where the climate crisis has extended serious risks outside of our local communities. The polar ice caps are melting, the Global South has rising seas and burning rainforests, North America’s own western seaboard is on fire for longer and longer periods in these recent times. It is not just our problem and reality any longer; it belongs to the whole of humanity.

It is the 21st century – surely we can do better than unchecked mega-corporations destroying our only home to make a buck. Investment in technology, in people, in education, in the forgotten, still-beautiful places that hold the remaining biodiversity and delicate ecosystems we all need to survive should be a no-brainer, one would think. One would hope.