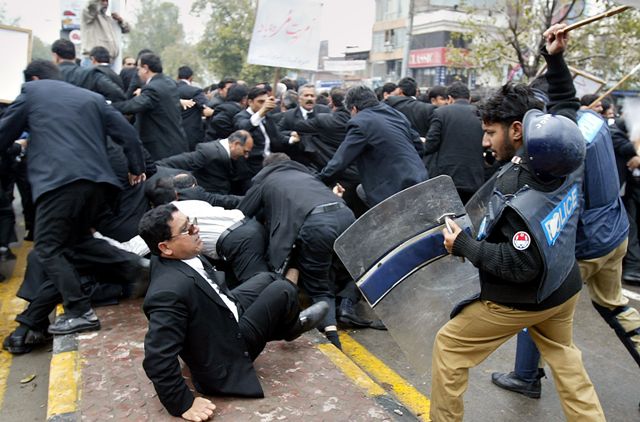 “Those of us who practice law in safe environments such as Canada owe a duty to those who risk not only their freedom but also their lives in order to protect their clients’ rights.” Gail Davidson, LRWC Founder

12 February 2020 – While peaceful protesters are arrested from coast to coast, Canada’s Minister of Transportation Marc Garneau calls the blockades in support of Wet’suwet’en land rights defenders illegal, citing the Railway Safety Act. He fails to mention that actions of the governments of Canada and British Columbia and the use and threatened use of force by the RCMP are themselves in violation of Canada’s binding international law obligations and therefore ”illegal.” The protesters, on the other hand, are exercising their legal rights to peacefully and strongly object to serious violations of the rights of  the Wet’suwet’en.

On 13 December 2019 a United Nations (UN) treaty monitoring body called on Canada to “halt construction…of the Coastal Gas Link pipeline in the traditional and unceded lands of the Wet’suwet’en people,” “immediately cease forced eviction of…Wet’suwet’en peoples,” “guarantee that no force will be used against…Wet’suwet’en,” and ensure that “the Royal Canadian Mounted Police and associated security and policing services will be withdrawn from their traditional lands.” The UN body also called on Canada (which includes BC) to “prohibit the use of lethal weapons, notably by the [RCMP] against indigenous peoples.”

After years of Canada’s failure to comply with recommendations of the UN Committee to End Racial Discrimination regarding the rights of Indigenous Peoples, particularly in BC, the Committee issued its December decision urging Canada to incorporate free, prior and informed consent into domestic legislation and seek technical advice from the UN.

Instead, Canada, while seeking a seat on the UN Security Council, is ignoring this urgent UN decision and is again directing and allowing the use of force to seize unceded traditional lands, evict Indigenous people from their lands, and deprive protesters and land defenders of their fundamental rights to liberty and to engage in peaceful protests.

Protesters across Canada are objecting to the repetition of the original colonial seizures of Indigenous lands and the accompanying trampling of indigenous people’s inherent rights to liberty, livelihood, and dignity. The grave consequences of this historic land grabbing and associated injustices persist to this day.

Now, in 2020, Canada and BC cite “the rule of law” as supporting enforcement of laws and decisions that purport to override international laws that protect the rights of both Indigenous Peoples and protesters. These international human rights laws have been binding on Canada and BC for more than half a century.

The RCMP arrests protesters and deprives them of their liberty for alleged violations of a civil injunction of the BC Supreme Court in favour of a corporation while Canada and BC violate the UN ”injunction” with impunity. These actions by Canada, BC and the RCMP are contrary to the rule of law upon which the protesters and land defenders insist. SOURCE