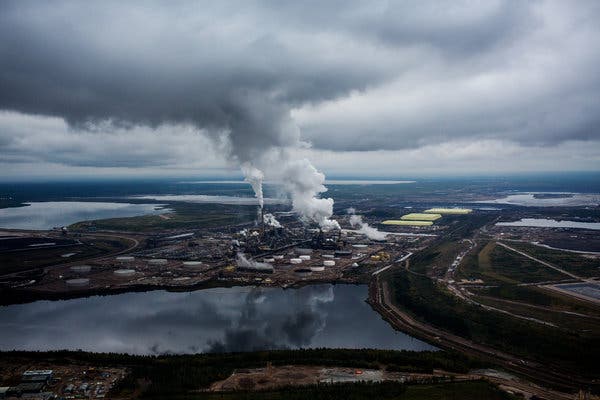 Some of the world’s largest financial institutions have stopped putting their money behind oil production in the Canadian province of Alberta, home to one of the world’s most extensive, and also dirtiest, oil reserves.

In December, the insurance giant The Hartford said it would stop insuring or investing in oil production in the province, just weeks after Sweden’s central bank said it would stop holding Alberta’s bonds. And on Wednesday BlackRock, the world’s largest asset manager, said that one of its fast-growing green-oriented funds would stop investing in companies that get revenue from the Alberta oil sands.

They are among the latest banks, pension funds and global investment houses to start pulling away from fossil-fuel investments amid growing pressure to show they are doing something to fight climate change.

“If you look at how destructive oil sands can be, there’s a very strong rationale,” Armando Senra, head of BlackRock’s iShares Americas funds, said in an interview, saying that the oil sands, along with coal, are “the worst offenders, if you want, from a climate perspective.”

Despite the pressure from foreign investors, oil-sands production has continued to increase in part because local Canadian banks and pension funds have remained willing to lend. And, as Alberta’s government is quick to point out, some of the same companies pulling away from oil sands are continuing to invest in oil projects elsewhere in the world including in countries such as Saudi Arabia.

Nevertheless, the clash over foreign divestment in Alberta — and the strong response it has provoked from local leaders — suggests the potential for the financial industry to influence climate policy if firms follow through on their early pledges to incorporate climate change into their investment strategies.

Alberta, meanwhile, has fought back hard against the divestment. In April, voters elected a provincial leader who promised to punish companies that stopped financing the oil sands. Then, in December, Alberta opened what it called a war room to attack anyone perceived as criticizing the industry.

“We have been targeted by a foreign-funded campaign of special interests,” Alberta’s premier, Jason Kenney, said after winning office last year. “When multinational companies like HSBC boycott Alberta, we’ll boycott them.” HSBC, the largest bank in Europe, has said it will stop financing new oil sands developments.

Financial institutions worldwide are coming under growing pressure from shareholders and activists to pull money from high-emitting industries. At the same time they are waking up to the fact that they have underestimated the climate-change risk in their portfolios.

Oil has made Alberta one of the wealthiest regions in North America, but the process of extracting petroleum from oil sands releases an unusually large volume of greenhouse gases. Because Alberta’s oil is locked in geological formations that make it particularly energy-intensive (and therefore environmentally damaging) to extract, it has provided an easy early target for investors eager to make a statement.

The oil sands have long been a target of environmentalists’ ire. But in 2017, the campaign against them shifted to the world of finance. That summer, the largest pension fund in Sweden, AP7, said it had divested from TransCanada, the company building Keystone XL, a pipeline to carry crude from the oil sands to the United States.

Other international lenders followed, announcing they would divest not only from pipelines but from oil-sands extraction projects as well. They include BNP Paribas Group and Société Générale of France, and Norway’s sovereign wealth fund 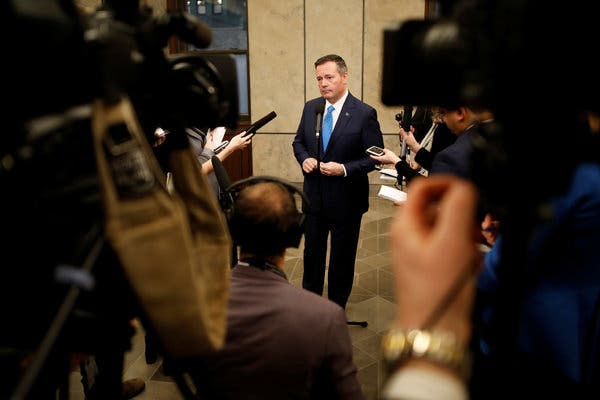 It wasn’t just financing that suddenly seemed at risk. Some of the world’s largest insurance companies, including AXA, Swiss RE and Zurich Insurance, announced they would stop providing coverage to projects in the oil sands, which are sometimes referred to as tar sands, as well as no longer investing money in those projects.

In December, the American insurer The Hartford said it would no longer insure or invest in companies that get more than a quarter of their revenue from oil sands or thermal coal mining. “We selected coal and tar sands because they have been identified as leading contributors to carbon emissions,” said David Robinson, the company’s general counsel.

Even large international oil companies began pulling out of the oil sands, including Shell in 2017.

A Shell representative said the company left because other companies with more oil-sands experience were better able to work there. But Andrew Leach, a professor of energy economics at the University of Alberta, said Shell was also responding to pressure from its own investors to pull out, given the high levels of greenhouse gases associated with oil extraction there.

“They were under significant pressure from their shareholders to pull out,” Dr. Leach said.

The latest blow came in December, when the rating company Moody’s downgraded the creditworthiness of Alberta’s debt to its lowest level in 20 years, citing, among other concerns, the province’s dependence on the oil sands and the environmental costs of extracting the oil.

In response to that pressure, Alberta has only increased its support of the oil sands.

Mr. Kenney, Alberta’s premier, has publicly vilified investors that left, complaining that some of those same investors also finance oil production in countries such as Iran and Saudi Arabia, which have lower greenhouse gas emissions per barrel but far worse human-rights records.

Mr. Kenney also promised to strip government contracts from companies such as HSBC and also threatened to put up billboards in the London subway, where the bank is based, intended to embarrass it for investing in Saudi Arabia while spurning Alberta.

Spokeswomen for HSBC and for Mr. Kenney both declined to say whether Alberta had canceled government contracts with the bank.

“I refuse to allow us to be lectured to by European banks and insurance companies” that do business with Middle Eastern oil producers, Mr. Kenney said in October. “We’re going to take that right to their doorsteps in Europe.”

After Moody’s downgraded the province in December, Mr. Kenney lumped it in with other global finance companies as biased, misinformed, or both.

“Increasingly, financial institutions, and this includes apparently Moody’s, are buying into the political agenda emanating from Europe,” Mr. Kenney said, adding that those institutions are often making decisions “based on data distorted, torqued data provided by green left pressure groups.” 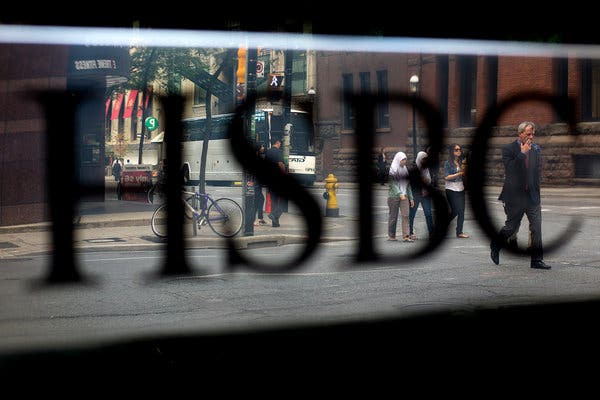 Later that month, Alberta opened its war room, which has a budget of 30 million Canadian dollars and a mandate to rebut criticisms of the oil sands. One of its first items, which are designed to look like online news articles, attacked a nonprofit group that teaches schoolchildren about climate change and criticized school administrators for letting the group talk to Alberta students.

“The center will take a fact-based approach, counteracting myths and lies being spread about our province and about our energy sector,” Sonya Savage, Alberta’s energy minister, said of the war room, whose formal name is the Canadian Energy Center.

The government’s antagonism toward overseas investors and other perceived critics reflects a political calculation, according to Melanee Thomas, a professor of political science at the University of Calgary: Railing against foreign influence plays well with conservative voters.

The problem with that approach, she said, is that the government has made it harder for voters or the oil sands industry to hear the message those banks are delivering: The world’s appetite for the most polluting fossil fuels is fading.

“The market’s already pointed in a particular direction,” Dr. Thomas said. “You can scream at it as it goes, but that’s not going to change it.”

In response to written questions for Mr. Kenney, his spokeswoman, Christine Myatt, wrote that investors should evaluate oil sands projects individually, adding that some projects have lower greenhouse gas emissions than others. “It is unscientific to draw a line around a region and say it is off-limits for investment,” Ms. Myatt said.

Mr. Kenney’s position “is not a campaign tactic,” she added. “It’s about responding to an existential threat to Alberta’s — and Canada’s — economy and to the livelihoods of hundreds of thousands of Canadians.”

Despite the political rancor, the divestment campaign has yet to curtail production. More oil was extracted from the oil sands last year than during any previous year on record, according to data provided by the Canadian Association of Petroleum Producers, the industry’s trade group.

That’s partly because Canadian banks and pension funds have remained willing to lend. Those institutions are more wary than their global counterparts of prompting a backlash from the Canadian public, experts said. 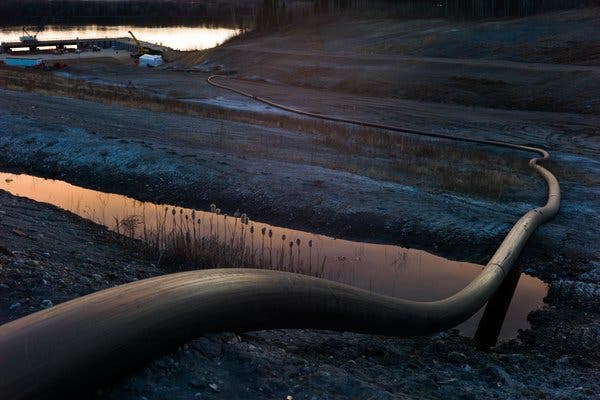 A senior Alberta official, speaking on the condition that he not be identified, said the frustration inside the government revolved around the belief that foreign investors are pulling out of the oil sands to earn the good will of environmentalists and activists. That tactic imposes no great sacrifice on those investors, the official said, since the returns from the energy industry have been low anyway compared with other industries.

The official also said the investors were ignoring progress that oil sands companies are making on greenhouse gas emissions, as well as the fact that some oil sands operations are closer to the global average on emissions.

The critics of divestment aren’t just in Alberta.

“What does divestment get you? What you get is, you get a headline,” Mr. Sabia said in an interview. “But you haven’t done anything really to direct your organization to be a positive contributor to the energy transition that the world has to go through.”  SOURCE